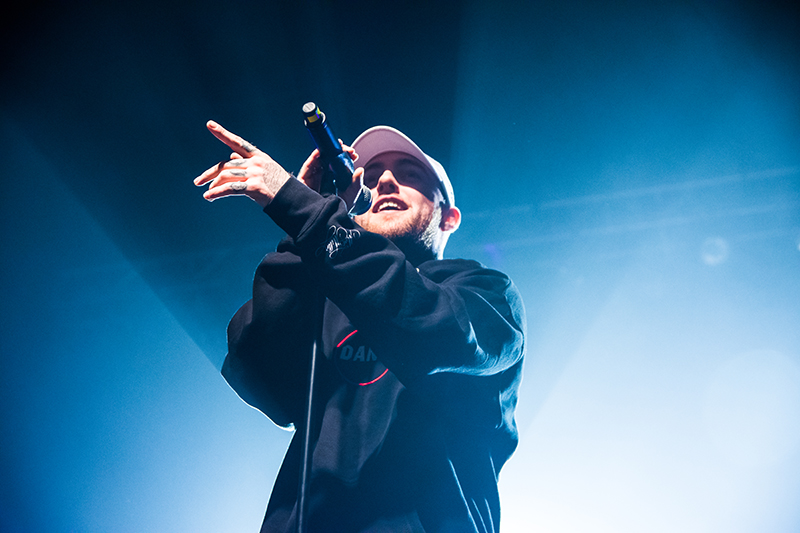 “No matter where life takes me, find me with a smile.” Photo: ColtonMarsalaPhotography.com

The stage was set on Tuesday night amid the crisp, November fall climate as fans arrived in mass to Saltair to enjoy the evening’s musical performance by Pittsburgh native Mac Miller, accompanied by openers Clockwork and SOULECTION ft. Whooligan. As traffic weaved and funneled through I-80, concertgoers were treated to a vivid sunset over the Great Salt Lake. As the sun softly set behind the Salt Flats, more and more Mac Miller enthusiasts crowded outside the venue, waiting for their chance to get the best spot possible to witness the evening’s performance. The all-aged crowd excitedly mingled at the merchandise booths, the ATM and then eventually the stage as they waited for the set to begin. The bar was prepped for a wild night, selling cheap, canned beer for just $4, while the main grill fed hungry fans with a menu of corn dogs, burgers and fries. Finally, Clockwork opened the evening’s act with a large set of popular mixes as attendees grooved to popular mixes like The Killer’s “Mr. Brightside” and Kid Cudi‘s “Day ‘N’ Night.”

As the unique historical venue filled with more and more people, the atmosphere in the large ballroom rose higher and higher. The lines at the bar grew deeper and longer as guests prepped for the coming energetic show. After Clockwork, SOULECTION feat. Whooligan followed, engaging with the lively crowd, full of beaming smiles and anticipation for the main act. Soulection’s electropop music resounded loudly through the venue, especially with his rendition of Chance the Rapper’s “Favorite Song,” which ignited a new vibrancy to the expansive Salt Flats—music could be heard for miles around the venue.

After the opening sets, the stage darkened for a few moments as the stage crew prepped for the moment everyone had been waiting for. The excited but impatient crowd began to chant Mac Miller’s name as the tension grew. Suddenly, Miller exploded onto the brightly lit stage. His dynamic hand movements mesmerized concertgoers while he rattled off his hypnotic raps. Then, in celebration of the recent release of his new album, The Divine Feminine, Mac Miller performed new selections like “Stay,” “We” and “Dang!” Each song elicited a ferocious roar from fans as Miller played a set consisting of a mixture of both new and old songs. In between numbers, the young rapper warmly reminisced with the SLC crowd about a late-night rave festival he had played years before at Saltair. His dedication to the Salt Lake City scene showed in his heartfelt lyrics, his spirited dance moves,= and the unique light shows that dynamically changed for each song. His adoring fans will remember the night featuring Mac Miller for a long time to come, as they patiently await his next epic return to Salt Lake City.