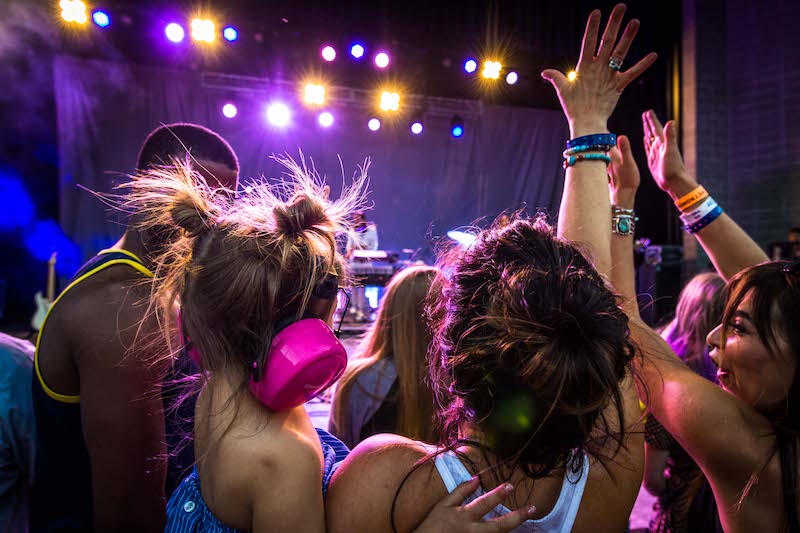 Feeling the rush of the front row.

As storm clouds seemed to roll in and the wind picked up, the Ogden Amphitheatre began to fill with music fans. The summer breeze cooled the air and Twilight goers hung out under a cloudy sky, waiting for Sleepy Passenger, Cold War Kids and Metronomy. Returning for another Thursday show, Lucky Slice, Thai Curry and Craft Burger sold delicious treats to hungry people. While beer and wine flowed for those with cash, other guests enjoyed shaved ice treats. As the wind died down, the multi-member band of Sleepy Passenger began to play, celebrating the recent release of their album.

In the cool afternoon sun, families and friends took to their feet when Cold War Kids began to play. Children danced and parents sang along as the well-known band played their final show of their seven-week tour. Playing classics like “Hang Me Out to Dry” and “First,” they also mixed in songs off their new album, LA Divine, like “Love Is Mystical.”

As the sun began to set, funky-cool Metronomy came on stage. All the members were dressed in white pants and shoes with mixed shirts, including an iridescent bodysuit seen on drummer Anna Prior and a Nigerian-patterned garment worn by Olugbenga Adelekan. The band rocked their electronic, funky music for an eager crowd. Their music floated into the evening sky, resonating throughout the city, finishing off the fourth Ogden Twilight concert of the year.