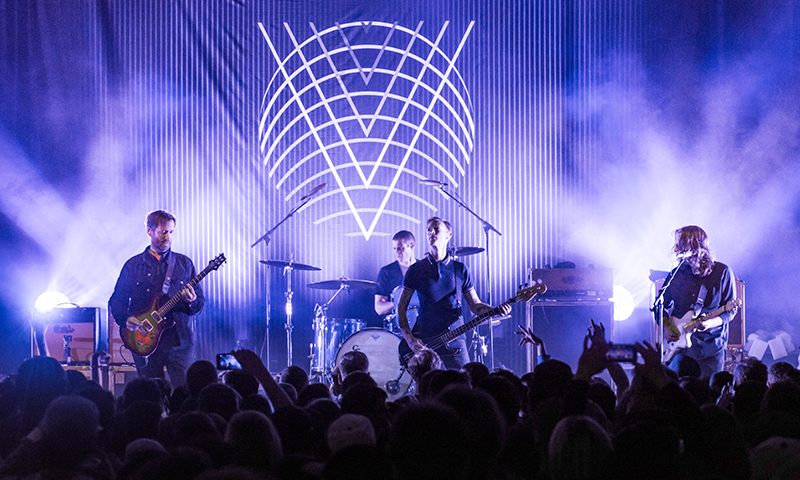 Minus the Bear starts their set.

Minus the Bear, Beach Slang and Bayonne @ The Depot 04.11

On a warm, spring Salt Lake City evening, music fans of all ages gathered at The Depot for performances by Beach Slang, Bayonne and Minus the Bear. Upon first entering the venue, the lower section seemed empty, but walking up stairs, the 21+ and VIP lounge was filled with anticipating fans. It was an exceptionally busy weekend for the Salt Lake City crowd, with multiple other events going on, like the National Handmade Bicycle Convention, the annual Tattoo Convention and Get Lucky, an EDM event out at Saltair. With all of these events, hard decisions had to be made about which shows were most important, and Minus the Bear was a big contender.

Bayonne, a stage name for Roger Sellers, brought an entertaining opening set to engage fans before the main event. As the long line in the bar grew, Bayonne serenaded the crowd with his pop tunes to start the night. Next up was Beach Slang, a part-punk, part-pop band started in 2013. After a raucous previous performance in Salt Lake City last year that sparked rumors of the bands’ dissolution, they were back in full force to the joy of all their fans. As Beach Slang finished their set, all of the attendees that were sitting upstairs migrated to the dance floor in preparation for Minus the Bear.

Minus the Bear walked onstage, bathed in a soft, blue light, erupting into their first song of the night, “Last Kiss,” from their newest album, Voids. During their third song, “Nights,” the crowd erupted in full force, showing their deep gratitude for all the musical talent presented by the band. After this performance, the heightened energy level maintained throughout the rest of the night. Having started in 2001, Minus the Bear has been bringing their music to the Salt Lake City crowd over and over again. They finished their set with “Pachuca Sunrise,” an older song released in 2005. As The Depot began to empty out, the crowd left the venue with big smiles and dreams of the band’s next performance.