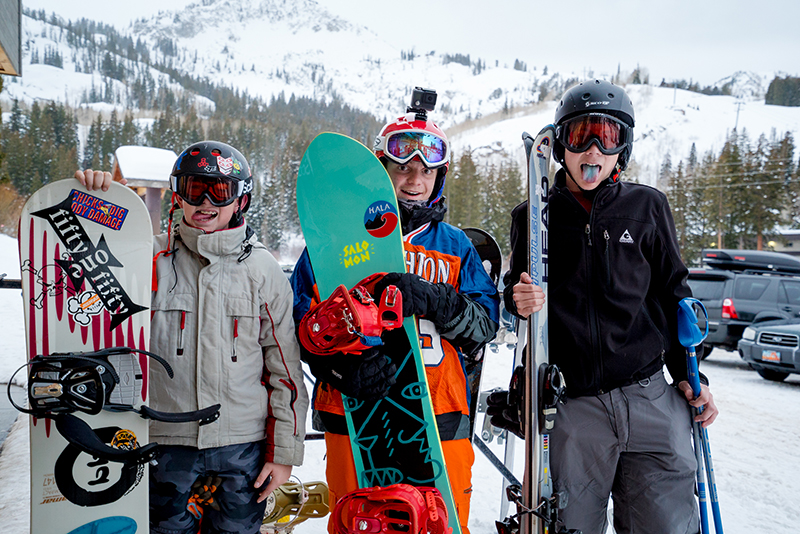 The snowflakes came down lightly as skiers and snowboarders arrived to Brighton Resort late Thursday afternoon, Dec. 15, when Brighton opened night riding for the season throughout its 200 acres, three lifts and main-mountain terrain park. Kids who finished school, others who finished work for the day and people who just like the night-ride vibes showed for opening night, smiling. Ticket boxes were fully staffed. Live music by Moab’s Meander Cat started at Brighton’s bar and restaurant, Molly Greens. Night riding runs Monday through Saturday, 4–9 p.m.

People hung out at Molly Greens, eating plates of nachos, hot savory soups and other fixings while drinking delicious holiday cocktails and local beer from Uinta Brewery.  I stopped in Molly Greens to listen to music, have a White Russian and warm my cold fingers. Meander Cat played their bluesy-Americana music with desert-influenced lyrics. Brighton has live music one or two days a week—check their website for the calendar.

The first lift I took was Majestic. There were no lines, and I was greeted at the top by a nearly vacant and snowy run. I cruised down to the terrain park, where riders played like amped kids who had been waiting for recess all day.  The snow began to fall heavily and temperatures maintained in the 20s, so it wasn’t too cold.

After the terrain park and running into some friends, I took a few laps on Crest. The lighting is really cool at night: bright enough for there to not be safety concerns, and there aren’t too many people, so that often, it feels like you have the mountain to yourself. After a few laps and pow patches spotted from the lift, we ventured to the scouted locations and hiked to hit some pow. There is nothing quite like hitting pow in the dark (or shooting it).

Time flew by, and before I knew it, it was lights out. I wanted to be that kid with a flashlight who sneakily continues to do what they want after last call—but I didn’t bring a flashlight.

Night passes are $45. However, Brighton‘s website has a night-skiing section that covers some weekly promos to get cheaper tickets.

Also, starting this month on Thursday, Dec. 22, Brighton Resort and Uinta Brewery are launching the monthly Uinta Ski Bus to bring you to and from the Uinta Brew Pub and Brighton Resort.  People will meet at the brewery and join the Uinta crew as they head up the canyon to enjoy an evening on the slopes and “après-ski” beers at Molly Greens with live music. Round-trip transportation, night-ski lift ticket, libations, raffle tickets and live music are available for $50.