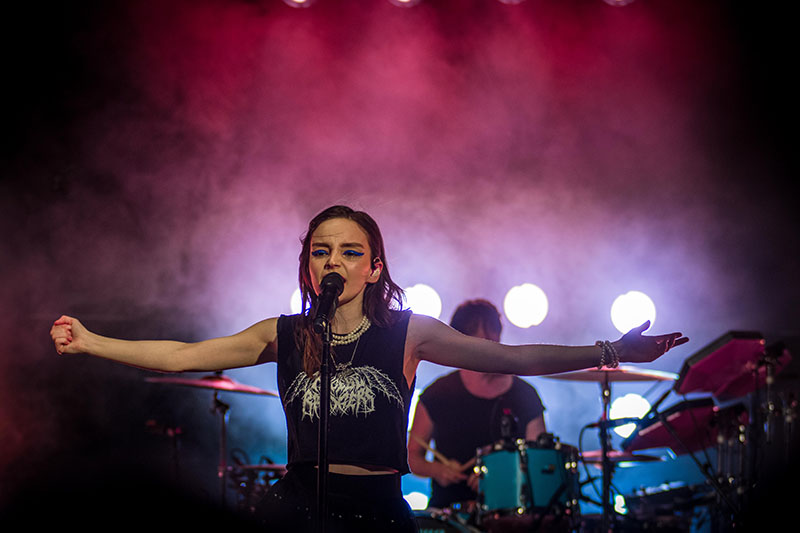 Wrapping up an awesome summer of concerts, the Ogden Amphitheater welcomed people for the final show in this magical 2018 Ogden Twilight Concert Series. It was one of the busiest concerts of the year, with lots of friends and family gathering on the grass and bleachers to enjoy one more evening of music. Tishmal, Pale Waves and CHVRCHES were slated to bring an amazing set of pop, punk and dance music to Ogden’s Historic 25th Street.

First up, Tishmal, an indie-electronic music project by Rachel Brockbank, opened up the show. The name “Tishmal” comes from “hummingbird” in Luiseño, the language of her native american heritage. Catch her on Aug. 25 at The Depot.

The next band on the stage was Pale Waves. Hailing from Manchester, England, the indie pop band is celebrating the future release of their debut album, My Mind Makes Noises. Heather Baron-Gracie, Ciara Doran, Hugo Silvani and Charlie Wood played songs like “Noises” and “My Obsession.” They brought a goth-punk vibe to the stage with platform creepers, dark makeup and thriller-esque moves. The band will be stopping by Japan before heading back to the U.K. for more stops on their tour.

As the night faded to a dark, moody sky, the packed venue was buzzing with anticipation. With smoke and light beaming through the air, CHVRCHES’ Lauren Mayberry joined the stage in a puffy skirt and Phoebe Bridgers T-shirt. Iain Cook and Martin Doherty were with Mayberry, and the smoky sky was perfect for the laser lights. The crowd was overjoyed to be able to see CHVRCHES in such an intimate and personal setting. The closing show was a joyfully sad event, signifying the nearing end of summer.