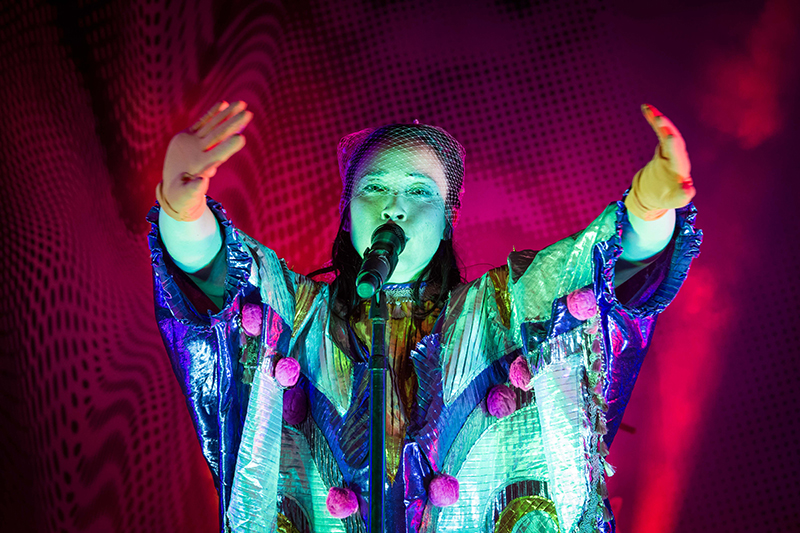 "Dancing eyes are deep ultraviolet you."

The second show of the Ogden Twilight series kicked off on another beautifully hot summer day. The trek to the amphitheater was full of rush hour traffic so it was easy to see why a FrontRunner pass was included with each ticket. Finally arriving to the show, people were slowly meandering into the venue, psyched on the return performance of Little Dragon. Equally anticipated were local band The Ugly Boys and opener Com Truise. Lucky Slice, Thai Curry, and Craft Burger vended delicious meals while Maui Wowi made fresh ice cream and Squatters provided delectable local beer.

The show started with a bang when overly-enthusiastic fans attempted to jump the VIP fence and dance front row. The security quickly escorted them out, but there was much fun to still be had. The Ugly Boys kick-started the show with their jams. They were enthusiastic and jump-started the crowd in the midst of the setting, sweltering sun. Their purple velvet shoes danced across the stage,mingling with the dancing feet of their fans. As Com Truise set began, more people joined the arena. One of many projects by Seth Haley‘s, Com Truise presented his electro-funk DJ set, a perfect supplement to Little Dragon’s style. Fans were primed and ready for the headlining performance.

Returning for the second summer in a row (the last time being for the SLC Twilight) Little Dragon stepped on stage in the dusky summer light. The quartet of performers, Yukimi Nagano (vocals, percussion), Erik Bodin (drums), Fredrik Källgren Wallin (bass) and Håkan Wirenstrand (keyboards) were dressed in brightly colored clothes. Nagano wore a bright shimmering tunic, a gossamer veil and purple Nikes. Throughout the show she danced with a meditative rhythm that delighted and enthralled the crowd. Their opening song included her banging on a red jam-block in time with the methodic playing of the drummer. After the first song, she switched to a small tambourine. The crowd was stoked on their performance, dancing along energetically to each song. The concert ended and the fans rushed out of the venue, speeding off to catch the last FrontRunner of the night.