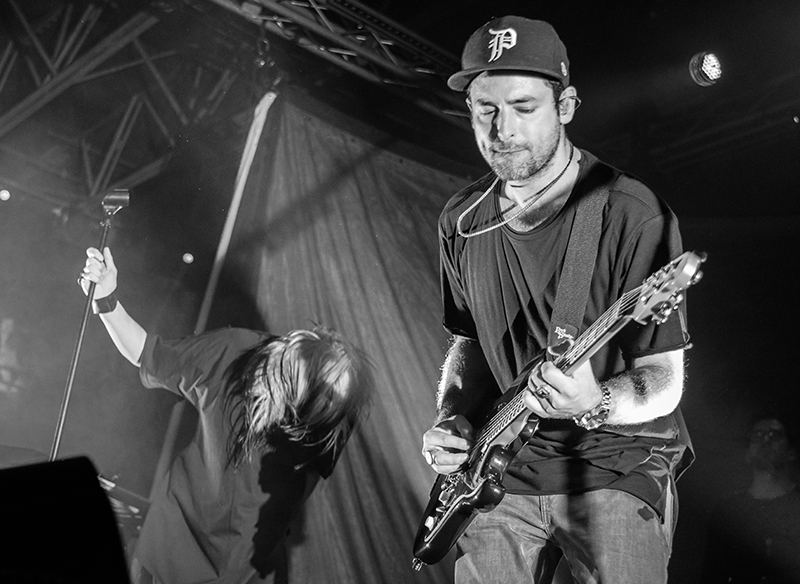 After their raucous summer performance as part of Big Grams during this year’s Twilight Concert Series, Sarah Barthel and Josh Carter ripped through Salt Lake City on Tuesday night as Phantogram in a whirlwind performance at In The Venue. During their first visit to Salt Lake City a few years ago, the duo brought their innovative electric-pop music to crowds at Kilby Court. Over time, their progress has been exciting to witness firsthand, advancing from smaller venues to Twilight and onto massive, sold-out shows of their own. It should be no surprise that Phantogram loves playing in Salt Lake City, where so many adoring fans have continued in their support as the group grew into the musical powerhouse they are today.

Doors opened at 7 p.m. as the line wrapped around the block while people hoped to get the best view of the evening. Many university students were off for Fall Break, which brought the city to life with the unusual nightlife. As people shuffled into In The Venue, lines at the merch booth, bar and bathrooms grew longer. The upstairs balcony quickly filled with Phanto-fanatics eagerly waiting to hear a mix of old classics and new releases from the evening’s act.

James Hinton, an artist known as The Range hailing from New York, opened the night with his beat machine, delivering a fresh, new sound found on his 2016 album, Potential. The crowd enjoyed not only his vibrant music, but also his energetic stage presence and rich light show. His 45-minute set kept the crowd engaged and the energy high for Phantogram.

As the lights went out, a transparent curtain, was raised between the stage and the crowd. The light projected the silhouettes of Phantogram onto the curtain as the captivating instrumentals of “Funeral Pyre” mesmerized the crowd. Strobe lights bounced of the giant disco ball glittering above the crowd, and the room filled with a bright energy that elevated the atmosphere to a new high. Both Barthel and Carter could not get enough of Salt Lake City’s love. They showed an enormous amount of gratitude to the loyal fanbase that has become their family here in the city. After the third song of their set, the scrim dropped to reveal Phantogram, bathed in colorful spotlights and frothy fog. The duo followed up with songs “Mouthful of Diamonds” and “Black Out Days,” among the many other crowd favorites that filled out the rest of their set. By the end, Phantogram had proven to have graced the presence of the crowd on Tuesday night. By the end of the evening, the crowd was chanting “one more song” until Phantogram finally acquiesced and fulfilled everyone’s wishes with their encore, “Fall In Love,” a much-loved song from their album Voices.