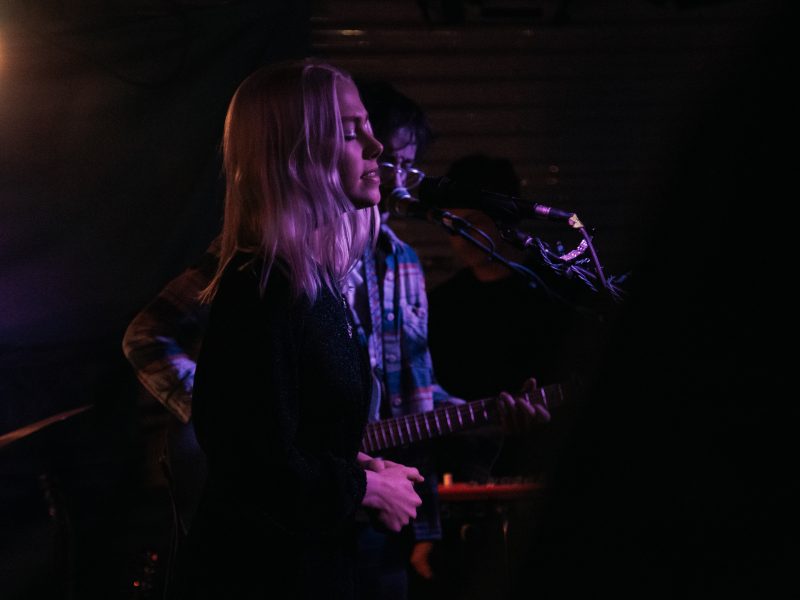 Her first show after a two-week tour break, Phoebe Bridgers played to a sold-out crowd at Kilby Court on Wednesday night. Bridgers and her band seemed to be right at home onstage at Kilby, reminiscing about SLC Punk and getting “rock-ognized” at the Trolley Square Whole Foods. Bridgers even recalled her friend Conor (presumably Conor Oberst) telling her that he once slept at Kilby, only to be informed by a member of the audience that some of the houses around the venue are owned by the folks that own Kilby. “He made it sound really punk rock, but he probably had a bed!”

As for the music, Bridgers and her four-piece band were spot on. Harrison Whitford, who Phoebe referred to as her best friend before a performance of the heartbreaking song “Funeral,” opened the show with support from the rest of the band, including Bridgers, who took the stage to sing backing vocals several times throughout the set. Whitford’s songs were honest and emotional, with a certain Neil Young quality that was most apparent during tunes like “Part Time Heart” and “Both of My Friends.”

Bridgers and her band reemerged after a wardrobe change and took the stage clad in black suits. Bridgers, bearing an acoustic guitar and standing behind a microphone stand wrapped with a string of Christmas lights, opened her set with “Smoke Signals,” the powerful first song on her debut album. Bridgers transitioned back and forth between emotional anthems like “Demi Moore” or “Funeral” and more upbeat, folk-influenced tunes like “Motion Sickness” seamlessly throughout the night, even covering Tom Petty’s “It’ll All Work Out” with precision in honor of his passing last year. “This is my favorite Tom Petty song,” she said, “because it’s the saddest.”

Each song was followed by raucous applause and cheering and a faint smile from Bridgers as she tuned her guitar or swapped instruments. When the applause died down, the crowd fell mostly silent. Bridgers had the sold-out crowd hanging onto her every move all night, right up to the moment she concluded her set. After a quiet and powerful performance of Mark Kozelek’s “You Missed My Heart,” the crowd slowly and somberly shuffled out of the venue.