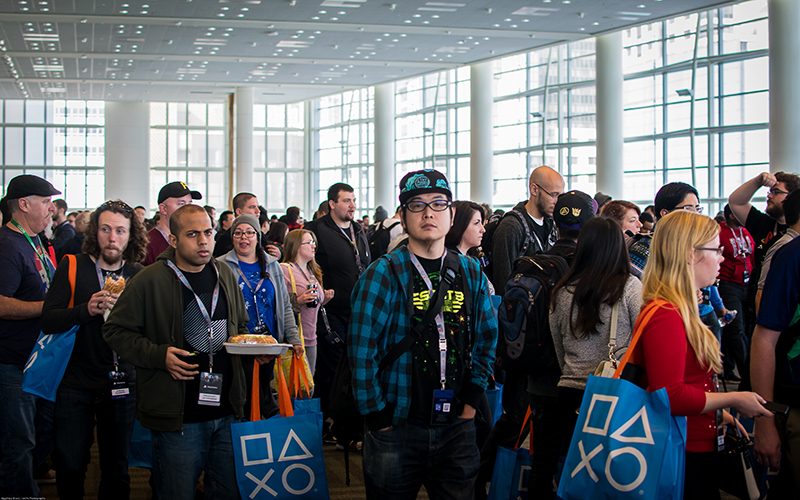 Crowds bursting from the PSX keynote panel to go hit the floor and play some games! [Matt Brunk / unlifephotography.com]

Sony’s PlayStation Experience offers a sneak-peek to gamers everywhere at what will be coming to PlayStation over the coming year. December 5th and 6th marked the second annual PSX gathering, a two-day event held in San Francisco, consisting of a plethora of panels, major PlayStation announcements, and hands-on experience with 2015 and 2016’s biggest games. The conference featured Sony’s VR hardware, a slew of indie games, and some bigger hits like Street Fighter V, Call of Duty: Black Ops III, and a Final Fantasy VII remake.

The Saturday morning Keynote address exposed some exciting things to come. The Last Blade 2, Bastion, The Bit.Trip, and Nuclear Throne are all heading to the Vita, which will be awesome. Ratchet & Clank will also be starring in their own movie, which will be coming out next year. As for the VR offerings, Rez and Ace Combat 7 confirmed Sony’s commitment to developing new VR IPs and developing the technology even further.

Many other announcement trailers were also shown. The new Street Fighter V character has been unmasked. His name is F.A.N.G. and he looks like a badass kung-fu master. Level-5 will be releasing a sequel to Ni No Kuni, and it appears mystical and prepossessing. The original Ni Nu Kuni didn’t get the greatest of feedback, but it looks promising for a second-tier RPG.

Moving on to some of the memorable indie games of PSX, SUPER IMPOSSIBLE ROAD released by Wonderful Lasers INC takes racing to a new visceral experience. Racing down a dream like rollercoaster track, making you feel closer to delving into a pure white void of nothingness. In the coming of age game of Jenny LeClue: Detectivú, you play a young girl yearning for adventure when friction builds after her mother gets accused of mother. You’ll find yourself betrothed and confined to the world of Jenny LeClue.

If you weren’t able to make it out to the conference you can catch our coverage of the Keynote presentation!

For more coverage of Playstation Experience 2015, check out our coverage page!