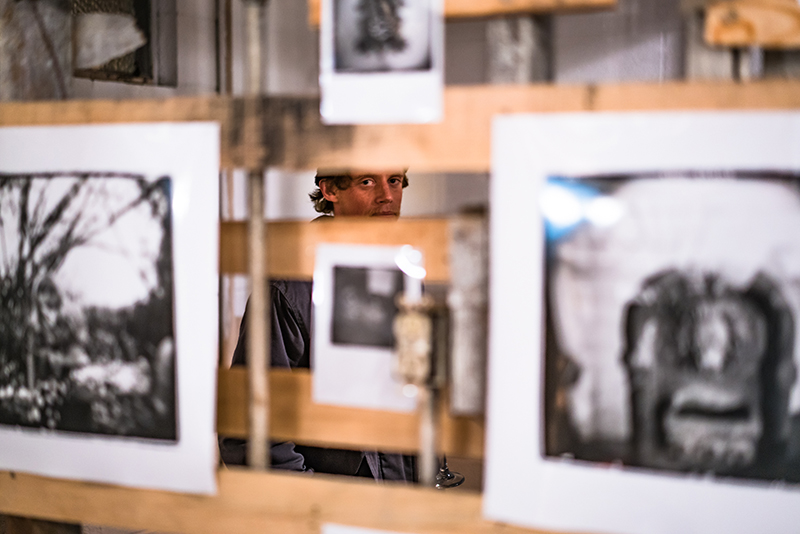 An underground artist’s collective put on a three-day art exhibition, running Jan. 19 through Jan. 21. The show lasted around six hours daily at the warehouse space behind the Shades of Pale Brewery in Salt Lake City.

Dennis Silversey, Douglas Tolman and Ben Sang produced the Shades of Entropy Art Show months after they built rapport with the art-enthusiast taphouse owners. Shades of Pale opened the door for the guys to use the back warehouse space for the event. The collaborative efforts of Silversey, Tolman, 14 other Salt Lake artists, musicians, Acme Camera Company, Daily Rise Coffee and the owners of Shades of Pale resulted in a successful Shades of Entropy Art Show.

Friday evening, people sipped delicious craft beer at the taphouse while talking and playing darts. Venturing outside, people congregated by a fire pit, and Layton’s Daily Rise Coffee served hot coffee. A wooden sign reading “Shades of Entropy” hung over the entrance to the back warehouse. Once inside, the warehouse space was converted into a beautiful art gallery with 16 various exhibits. Pallets hanging above the rafters displayed art—some artists constructed their own displays from fencing, tapestries and more.

Osis, a jazz ensemble, played the first set. Shanin Blake and the Shakes played a two-hour set next on a cleverly constructed pallet stage near the entrance of the space. The music was funky and upbeat, yet not overpowering the remainder of the gallery for those strolling and pondering the art installations.

Emily Senkosky, an artist in the show, came up with the title of the event.  According to Silversey, it references taking the definition of entropy—which is a measure of the degree of disorder in a substance or a system—and translating it into the artistic world describes the nature of the show. The direction of Shades of Entropy took the concept of the gallery and turned it into something else. Spaces and walls changed to shift the idea of how people perceived their art. The idea of the art show was to have artists make projects interactive and make some 2D art as 3D as possible.

Tolman and Silversey aim to produce more art shows in the future with the goal of subverting how people approach art.  Salt Lake’s underground art scene and community will continue to flourish with collaborative efforts and visions of talented artists and enthusiastic support from locals.