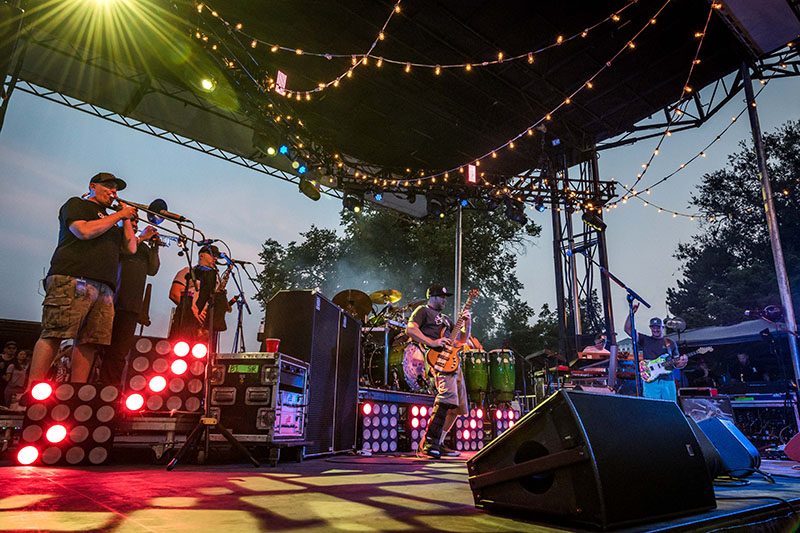 On a hot summer evening, a crowd of music lovers gathered under the shade of the Salt Lake City Public Library. Merch booths, food trucks and cold beer lined the street along 200 East, leading to the stage on the south side of the library. Iceberg shakes and Lucky Slice peddled their cold delicious shakes and freshly cooked pizza. The area in front of the stage was packed full of people listening to Pepper. Despite the $45 tickets, a diverse display of tie dye gathered to listen to the reggae music under the hot summer sun.

Pepper opened the show with their quintessential surfer-boy vibe with upturned visors. The band engaged the crowd with a giant RAW blow-up joint, and everyone reached high into the sky to toss the bouncing doobie back and forth. Bret Bollinger, Kaleo Wassman and Yesod Williams founded the band in Hawaii in 1996 and have been jamming ever since. Celebrating their eighth studio album release, the band played a mix of old and new tunes.

After a short break in the music, beloved band Stick Figure walked onstage. Vocalist, producer and guitarist Scott Woodruff, keyboardist Kevin Bong, drummer Kevin Offitzer, bassist Tommy Suliman and keyboardist, backup vocalist and guitarist Johnny Cosmic were joined by their lovely tour pooch, Cocoa, an Australian Shepherd. The playful pup danced and jumped with the crowd as balloons floated around and the band’s reggae vibes spread through the air. People from near and far gathered to see Stick Figure, and the band was met with some of their most enthusiastic and dedicated fans.

Slightly Stoopid, another ’90s favorite, finished the show off with a bang. Kyle McDonald and Miles Doughy, the original bandmates, bounded across the stage singing everything from their oldest songs to their newer ones, delighting the crowd. In the mid-1990s, the ska-punk band Sublime’s vocalist, Bradley Nowell, stumbled upon the awesome reggae-punk-sounding Slightly Stoopid. They released Slightly $toopid and quickly rose to great heights with songs like “The Prophet,” “Collie Man” and “The Joint.” They welcomed Rashawn Ross from Dave Matthew’s Band to play trumpet, and he rocked the stage.

As the clock struck 10, the show ended and crowds flooded into the streets. Stumbling over to the Pie Hole, a great late night snack of giant potato and bacon slices and jalapeño mango slices were consumed. The night felt perfectly complete.