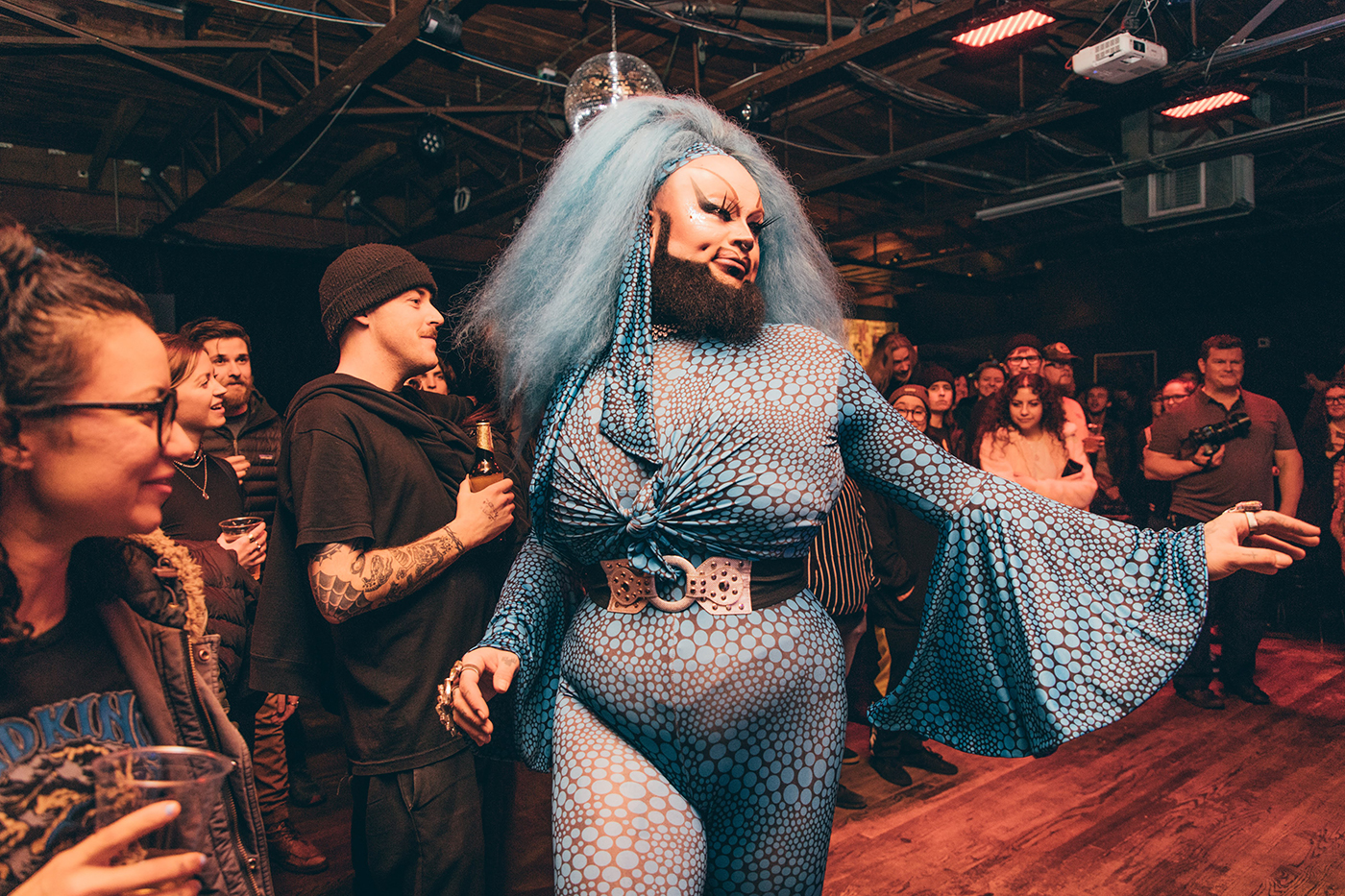 SLUG Mag’s 31st Anniversary Localized Show on Feb. 21 brought down close to 300 people to SLC staple venue Urban Lounge on a cold but electric Friday night. Pouring in from their Lyfts and Ubers, attendees came to both celebrate SLUG Mag’s 31st trip around the sun and to say one final goodbye to four reunited local bands: Beachmen, Dream Slut, Purr Bats and Telepanther.

With each band having been broken up before playing this show, the musicians spent months preparing to reunite and play for the last time on this special night. The evening was particularly rousing with the “brought back from the dead” theme shaking this lineup awake from their slumbers. Tombstones carrying the names of each band were posted up at the front of the stage while fog crept along the front of the dance floor—the same space that Hostess and Mistress of Ceremonies Ursula Major will soon perform in to start the show.

The towering Mistress kicked off the night dressed in a leopard-print gown and her iconic makeup style. After this ecstatic queen performed a lip-sync number she brought on the first band, Telepanther. Providing an outer-worldy electronic-rock performance, Telepanther did not waste time to get the crowd moving. As would be the routine for the night, Ursula came on in a different look to perform once again and introduce the next band, Purr Bats. Purr Bats switched it up with their quintessential orange gowns and zany DIY crowns to deliver their punk performance straight out of the late ’90s and early oughts.

Just like that, half the night had slipped away and the remnants of the drink specials designed after each band name riddled the ground and the surrounding tables. The defeated plastic cups lying empty and toppled over sparked the idea that the drinks were off warming someone’s belly somewhere. This was likely someone shaking their ass on the dance floor or invading the green room—the latter group comprised a lot of people. Unfurling in a blue-mod jumpsuit and chilling ice-blue wig, Ursula is three-for-three with her performances and is ready to dazzle the crowd before Dream Slut hit the stage. Post-punk/grunge band Dream Slut felt like they carried the last few month’s anticipation on their shoulders and just started to scream. Their 30-minute set was a burst of frantic energy and set the tone for what Ursula had in store for her last appearance.

Titty-tassels in tow, Ursula comes out ready to introduce the last band, Beachmen. For this performance, she was equipped with—that’s right—a staple gun to attach her cash tips to her chest and legs. The audience leaned in and made the stunt worth Ursula’s while with their cash contributions. Once that party was over, a calm settled over the crowd as they somberly braced themselves for the last band, not wanting the night to be over. Beachmen shows never failed to make a group of people bounce and sway together with their tried-and-true indie-rock songs, and this night was no exception.

SLUG Mag’s 31st Anniversary Localized left the audience sweaty, exhausted and exhilarated as they trickled back into the streets to hop into a cab or linger in front of the venue and finish their cigarettes before they made the trek to Twilite and find another party. What a time.