The second half of SLUG Magazine's 15th annual skate series, the 5th Annual Roughside of the Trax contest took to the streets on Saturday, Sept. 13! Registration began at 1 p.m. at Fairmont Park, then we hit the road to reveal secret spots. 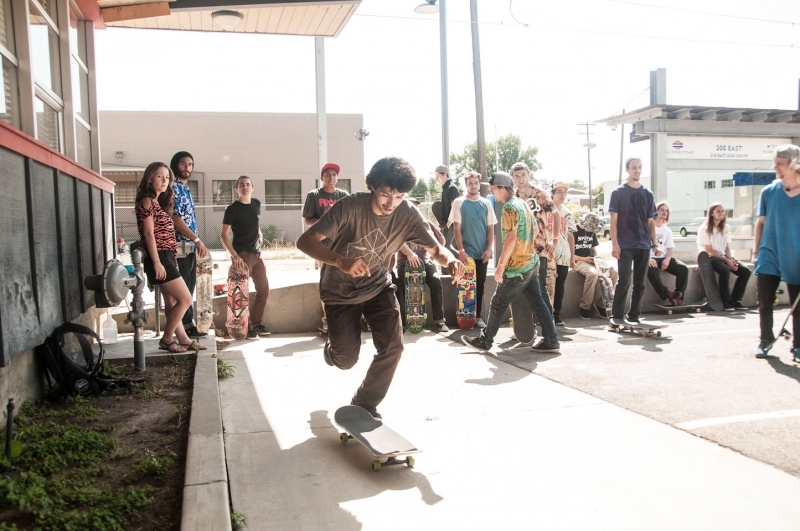 The Summer of Death skate series wrapped up this past weekend with SLUG’s annual Roughside of the TRAX contest. Using TRAX as our transportation and the city as our skate park, the contest is unique, with new spots and features each year. Johnny Roughneck and SLUG Magazine set up shop for registration and (heavy-hitting) warm-ups at Fairmont Skate Park. From the park, boom boxes bumped and wheels screeched as the skaters mobbed out to the first stop of the Roughside SLC tour.

Our first stop brought us to a tech-savvy manual pad on the east side. With two steps up and two steps down, this feature was the perfect size to go big, technical or basic. Among the bangers, Taylor Mineer kicked it off early with a nose manual, front side shove to manual combo. Victor Quintana stuck the first front 180 to switch manual of the session. Flipping in or out is always a heavy move and Nate Brown knew it with his nollie inward-heelflip manual that got the hype up for everyone. The thigh-high handrail route down the side caught some action, as Caleb Orton stuck an allusive, caveman-board-slide, while the two stair handrail caught a front nose bonk by Mike Zanelli. Boards and bodies flew on and off the pad with everyone getting tricks. The sun was high and hype was on when it was time to hit TRAX for spot number two.

Everyone gathered by train, car, bike or skateboard down a dirt path to the big drop, “Junk Spot.” A chest-high loading dock with a foot higher ramp at the end was the setup for this impact heavy session. Skaters popped ollies and grabs to get their legs ready and the session progressed from there. Curtis Ocampo came through, whipping a huge front side 360 boneless, which stepped the bar up right off the bat. With everyone getting hyped on each other’s tricks, the session carried some serious energy. Nate Brown came through again with a front side 360 while his brother, Jordan Brown, threw a stylish backside 360. Zanelli kept his unique tricks coming with a huge front K-grind bonk on a junk rail, stabilized by rocks. The size of the drop brought out some unique grabs with shove-it tail grabs and benihanas being thrown in the mix. Clark Thomas threw a bunch of tricks, including a backside 360, a stanky-legged 360 flip (on a different board after he broke his) and a front side big-spin. Orton shut the session down with his hard-earned switch heelflip to, the absolute, bolts.

The troops were rallied as we bailed on the junk to “Bonus Round” number one; another, more mellow, loading dock kicker. With a decent flat on top, After Dark skateboards provided a bench to pop up and slide, which added a new take on the spot. Zanelli threaded the needle with a barrage of tricks, including a backside crooked grind and a backside nose grind to backside 180 off. Thomas earned his stripes at this spot and got sideways on a backside blunt slide on the bench. The detour was a treat for all, but time winded down and we had to move out for the third main spot.

Back into the heart of the city, we went to a mix and match spot of all features. A ledge with angle iron, a manny slab to down bench and a sizable handrail were the hot spot here. Zanelli popped a nose grind 5-0 transfer on the ledge to a sketchy steel beam on the end. Jordan Brown kept up the tricks with a switch tail slide front side 270 out, followed up by Clark Thomas with a switch front side 180 5-0 grind, to backside 180 out. The technical tricks kept coming, with Nate Brown stomping a backside crooked grind to nollie flip out. The handrail was a focal point to some front board slides, courtesy of Caleb Orton and an insanely solid smith grind from Jose Sweet who had been throwing himself all day. Sweet’s trick called it for “The Goat,” but a brand new 10 stair awaited the masses!

The mob gathered, and little man David Mack had no problem busting a front side 180 down the set twice his size. The Brown Brothers killed it again, with Jordan sticking a backside 360 and his brother following him up on a frontside 360. Three spots and two bonus rounds under our belts, Roughside 5 was a wrap as we headed to The Shred Shed for awards and hangs.

Taking Third place, with his unique bag of tricks at each spot, Mike Zanelli landed himself a hefty prize pack. Second was too close to call, so Jordan and Nate Brown showed some brotherly love sharing the podium. Best trick went to the worthiness of Jose Sweet’s smith grind at the “Dead Goat” rail and Caleb Orton made it to an honorable mention with his undeniable shredding of every spot. Last, but certainly not least, was Clark Thomas, whose big tricks and all-around solid skating (even on a different board) gave him what he needed to get first place. Big thanks to everyone involved, and to our sponsors: Crossroads Skate Park, Ramp Sports, BC Surf & Sports, Us Against One Clothing, Salty Peaks Board Shop, Milo Sport, Publik Coffee, INI Cooperative, Rebel Union Clothing, After Dark Skateboards, Roughneck Hardware, Black Gold Grip Tape, and Everyday SF for stuffing those prize packs to the fullest and for lacing us all up on that product toss. Show these companies some love and gear up for next year—Roughside 6 is coming!