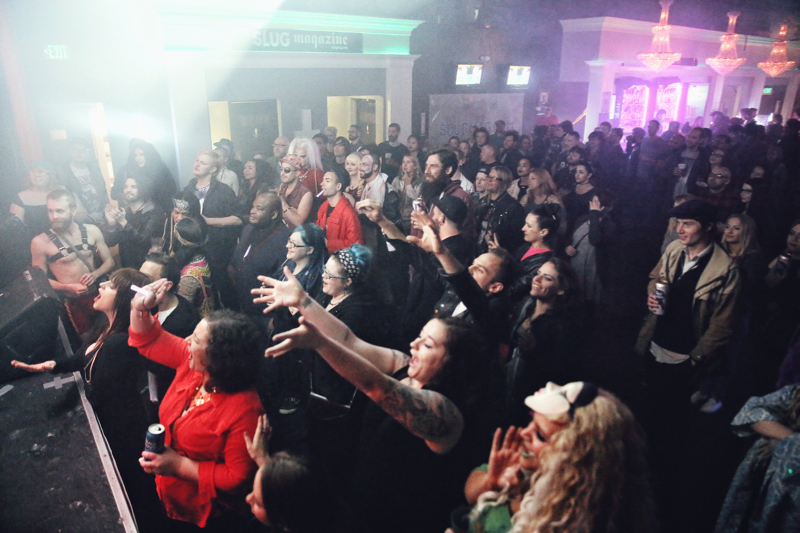 "Pick me! Pick me!" SLUG threw some amazing goodies into the crowd including shirts and Death By Salt V records. Photo: johnnybetts.com

How does one quantify the impact that SLUG has had on our community over the last 27 years? Throw a damn good party at Metro Bar in downtown SLC, that’s how. I don’t think that a forum of SLC patrons boring us with the tales of contributions and moving stories of local heroes comes close to the booty shaking, cross-dressing, libation pouring, music-making and epic mayhem that was experienced by all those who came to show their support for the anniversary party of SLUG Magazine. It’s hard enough to stay alive and attractive for 27 years, let alone keep something running and evolving to meet the changing landscape of physical medium journalism and cultural editorials—SLUG has not only managed this, but has created a haven for writers, poets, photographers, artists, musicians, geeks, gamers, snow lovers, foodies and more.

The evening was supported by performers dressing up as members of the 27 Club (famous artists who each passed away at the age of 27), including Kurt Cobain, Jim Morrison, Jimi Hendrix, Amy Winehouse and others … as well as local artists who adorned the upper area of Metro Bar with their pieces. Alcohol was sponsored by local distributers including Southern Wine, and unique drinks were crafted just for the event. I’m pretty sure anyone who’s anyone was there, including the entire staff of SLUG magazine, who had every right to parade as artists basking in their greatest work.

What impressed me perhaps the most about the evening was the range of people in attendance. Many in attendance were there simply because they are either involved with the magazine or friends with those who are actively involved in the Salt Lake City community. I enjoyed that though not everyone has a direct tie to SLUG magazine and it’s extensions, they recognize the contributions and work that SLUG has been a part of for the past 27 years. Local business owners, local artists and just plain locals all joined in one voice to celebrate. Thankfully, I don’t anticipate SLUG joining the 27 Club anytime soon, so you should have the opportunity to celebrate with us next year. Just get there early, cause I suspect that next year it will sell out!