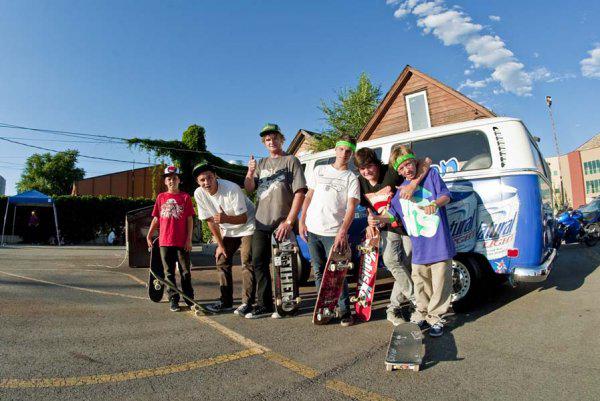 Summer of Death: Roughside of the Trax IV Presented by Scion 09.07 Carson Parkinson drops off the edge of the overpass to come in third. Photo: Talyn Sherer

The 14th annual Summer of Death has come and gone, and what a banger it was. Roughside of the TRAX IV Presented by Scion was one for the record books. Johnny Roughneck, creator of Roughneck Hardware out of San Francisco, was out in the streets to throw the Salt Lake version of the Roughneck BART Tour. The premise for the contest is to not be bound to the closed-in area of a skatepark, but to be mobile and to consist of various street spots around Salt Lake, all while being in convenient enough locations to use public transportation.  I know what you’re thinking to yourselves right now: “Wow, that is fucking genius!” And yes, I couldn’t agree more. With some pretty heavy spots, this was no walk in the park for anyone involved—it was bound to be epic. Johnny Roughneck and crew got the crowd together early, and a variety of chaos and skateboarding ensued shortly after. Between mobbing the streets, public transportation and skating the spots, Summer of Death was sure to be on the #roughside.

A noteworthy session went down at 9th and 9th skate park during registration time, while the 50-plus skaters gathered and got ready for the day. A heavy warm-up on the down rail would foreshadow events for the rest of the day, with some bangers from Jordan Brown and Nate Brown, as well as Caleb Orton throwing down a plethora of tricks to get the blood flowing. The troops gathered just before 3 p.m. and it was off to the train station. While some bobbed and weaved on the uneven sidewalks, others took to the streets and accepted the risk of the daytime traffic. The TRAX station was packed and ready to go, with all fares paid courtesy of SLUG Magazine. With a mostly unknown scene now out in the public eye, raised eyebrows and snickers were sure to follow from the other passengers, given the motley crew that was suddenly among them. The costumed fans of Comic Con threw a humorous twist on things, leaving even myself thinking, “What the fuck is going on here?”

Our first spot brought us all to really “Discover Gateway,” as well as the unique and skateable architecture within it. You could slide down the C-ledge, send a wallie off the rock over, lip slide up the ledge, or wallie the spherical decorations of the sidewalk. The contestants were anxious to take their skills to the streets, so the session went off from the get go. While one skater was sliding the ledge, another was popping over it, and another was sliding the other way. Cameron Parkinson had a wallie, late frontside shove-it off the rock gap while Orton stuck it out at the spot, just long enough to pull off a stylish, backside boardslide to pop over the ledge that would land him Best Trick for the day. Once we got wind of po-lice trying to get down on us, the mob headed out around the corner to a sizable parking lot to parking lot gap with a tight landing. Nate Brown took no time to launch himself down the gap as well as pulling off a ninja-like frontside 180. Orton was not far behind, grabbing his nose down the gap. The spot was shortlived, but a banger for sure. From there, the Roughneck soldiers caught a train out west to our next stop for the day, which was out there, in more ways than one.

As the mob moved further west, we eventually got to an underpass bank, with ramps on each side and a ledge going the length under the bridge. Things got started here with a couple of halfway hill bombs down the bank, which eventually turned into a drop contest off the highway barrier above. Both Cameron Parkinson and Carson Parkinson charged this drop, leaving some skin to show for it. Brown showed off his rough side at the spot, dropping from a nose blunt stall, into the bank from the highway barrier, which landed him ass down on the sidewalk, as well as into the SLUG history books. After the excitement of the death drop cooled, a couple contest goers hit the bank with some flat ground tricks, including a backside flip, nollie backside heelflip and a stylish no comply pressure flip 180 from the homie Millhouse.

As the storm clouds began inching their way closer, we trudged back onto the train and back east a bit to hit the next spot. A circular, sizable manny pad roundabout would lay the groundwork for this technical leg of the contest. With bodies charging the spot from all angles, it was a bit chaotic to see who was doing what, but tricks were going down. The transition of the sidewalls made wallie manuals and nose manuals the most attempted tricks with some flips out on either side. Getting across the pad unscathed was worth a medal in and of itself, as collisions became more and more apparent, making the sidewalls an attraction to the spot as well. The rain held for most of the day but broke out in the middle of the manny pad session, leading us all skitching, hitching and pushing like mad men and women to the nearest bridge underpass, which contained the last features for the day.

With the rain coming down on either side of us, our mob of skaters made the most out of this dry spot, hitting the transition going up the Jersey barrier and showing off their rugged style and DIY spot skills. Jorge Martinez, winner of the am division from the first SOD contest this summer, tore up the spot with a frontside 5-0 transfer and then a frontside 50-50 with a same way 270 into the bank. Carson Parkinson knocked a quick backside krooked grind tap on the top of the barrier while Jordan Brown backside nose slid the bank. There were honestly too many tricks going down in too many places to keep up with, but the session would pretty much wrap up with a technical backside feeble to backside tail slide transfer on the Jersey barrier by Levi Faust.

Johnny Roughneck rounded up the troops under the bridge for the announcements of the big winners of the day. Best Trick would go to Orton with his last-minute board-slide pop out on the C-ledge at the first spot. Third place would go to Carson Parkinson, who was followed by his brother Cameron in second, and Brown would close it out, taking home first place as well as Best Digger from the death drop spot out in the Wild West. The winners’ circle took home some hefty prize packs put together by all of our sponsors. Nike SB also put a new pair of shoes on the contest-goer with the worst shoes. From there, it was off to Spedelli’s for pizza, beer and music from The North Valley and Edguf as well as some more product to be tossed from Johnny Roughneck and the nice people at Scion. Thanks to sponsors After Dark Skateboards, Saga Outerwear, SK801, Salty Peaks Boardshop, Milo Sport, Goal Zero, Arcade Belt Company, Scion, Epic Boardshop, Arize Board Shop, Board of Provo, iNi cooperative, Spedelli’s and, of course, Johnny Roughneck and Roughneck Hardware. Thank you to everyone who came out, contributed and made Roughside IV Presented by Scion so awesome. Until next year, remember to keep an eye out on the Roughside.