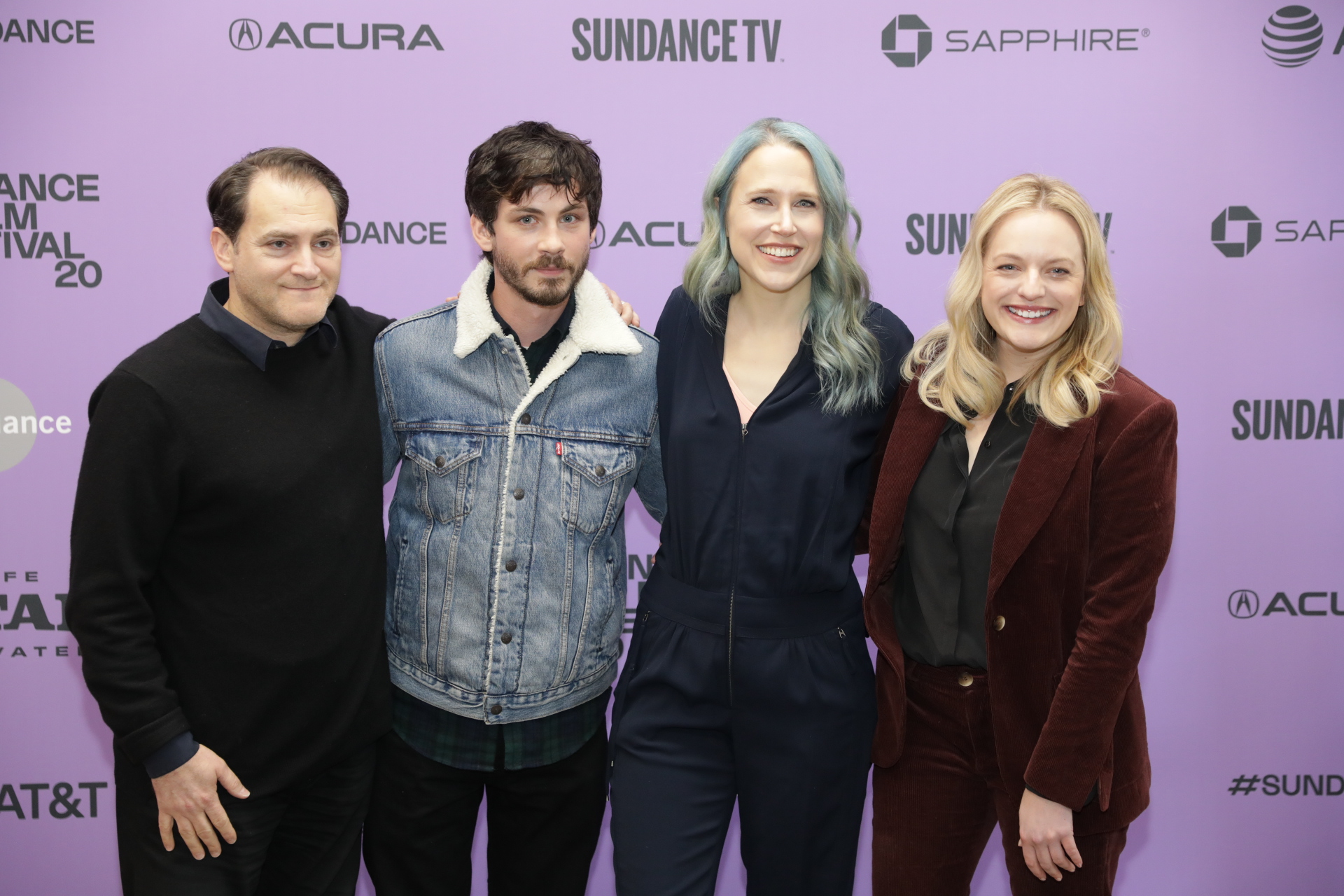 Cast of the new film, Shirley at the Eccles Theater for the Sundance Film Festival 2020. Photo by: Logan Sorenson (Lmsorenson.net)

Sundance 2020 Friday, Jan. 24: The premiere of the film Black Bear is almost underway—the cast and crew are ushered onto the Library Theater red carpet to take some photos and share their excitement for this project they’ve been working on. Black Bear‘s film description is as listed: “At a remote lake house in the Adirondack Mountains, a couple entertains an out-of-town guest looking for inspiration.” The drama stars Aubrey Plaza, Christopher Abbott and Sarah Gadon. Also in attendance is director Rob Leitzell who tells about how the film is a personal story in which he “poured himself into,” while he takes interviews minutes before screen time.

Later at the Eccles Theater, cast and production staff arrive to promote and introduce their latest project Herself. The synopsis describes the film as “an Irish single mother of two young girls faces a dire situation. An attack by her abusive ex-husband and a housing crisis in Dublin leave her living in fear.” Principal cast member Clare Dunne (Sandra), and others, including director Phyllida Lloyd, express their excitement to be at Sundance. They also recognize the importance of the retelling for the type of story they’ve created by including elements of social neglect, spousal abuse and other issues within the city of Dublin. Hearing the creatives involved speak about their experience with such passion helps heighten the anticipation for the film.

Ironbark, a period-drama piece starring Rachel Brosnahan and Benedict Cumberbatch (not present), is about a Cold War spy and his Russian source as they try to put an end to the Cuban Missile Crisis. Director Dominic Cooke and other members of the production staff were also present at the Eccles Theater—they wore smiles and had high levels of excitement for the red carpet.

Saturday: the film Shirley premieres at the Eccles Theater, and members are full of energy as Elisabeth Moss, Michael Stuhlbarg, Odessa Young, Logan Lerman and director Josephine Decker take a few photos and interviews. Decker expresses her pleasure in the being given the opportunity to work with Elizabeth Moss in this biographic picture, telling interviewers “she is one of the most daring” among working actors today.

Uncle Frank is a film that relays an extremely personal narrative for some of the cast members—a family dynamic is explored where a member is “in the closet’ for a majority of their life. This stars Paul Bettany, as the titular Frank, and Sophia Lillis as his teenage niece, who leaves her rural home and family to go to university and discovers her uncle living with his partner.

Four Good Days stars Glenn Close (Deb) and Mila Kunis (Molly) as the mother-daughter duo. It is described as “A true emotional rollercoaster. Four Good Days showcases the desperate decisions of a family destroyed by Molly’s addiction to drugs and her mother’s guilt-ridden compulsion to save her.” This film depicts a seemingly powerful and difficult story that is all too familiar with modern society; it’s lining up to be a must-see.

Also premiering at the Eccles Theater during the 2020 festival, is The Nest: “Life for an entrepreneur and his American family begin to take a twisted turn after moving into an English country manor.” The film stars Jude Law, Carrie Coon, Charlie Shotwell and others. These members gather on the red carpet to celebrate their new project and excitement for the event.

Downhill, the new Netflix property starring comedy legends Julia Louis-Dreyfus and Will Ferrell, also includes the Lord of the Rings’ Miranda Otto, Game of Thrones’ Kristofer Hivju and The Office’s Zach Woods. The cast and production members have high energy during the Eccles Theater premier. While posing for photos, a few screams (or three) are heard as Ferrell engages with the crowd.

Monday: The day is a bit slower already with the weekend over for some and “Monday” finally kicking in for others, but Sundance still goes strong. With the premiere of Horse Girl starring Allison Brie, Debby Ryan, John Reynolds, Molly Shannon, John Ortiz, Robin Tunney and Paul Reiser, cast and production members trickle into The Ray Theater in Park City and pose for photos and questions before the film starts.

The Last Thing He Wanted tells the story of “a veteran journalist who loses the thread of her own narrative when a guilt-propelled errand for her father thrusts her from byline to unwitting subject in the very story she’s trying to break.” The film is adapted from Joan Didion‘s namesake novel. The premiere at the Eccles Theater stars Anne Hathaway, Willem Dafoe, Rosie Perez, Edi Gathegi and others. Spirits are high as cast and production staff meet after wrapping the project up months ago, posing for photos and enjoying their experience during the festival.

Every year, the same banners go up, the same bus schedule is planned and the drink prices increase just a touch, yet there is always a hint of that special something during the Festival. We’re all enamored by the chance to view these projects: Some maintain their budgets by the skin of their teeth, some are built on a name, and others burn forward purely from passion for the story they’re telling. Every year, there is a great time to be had by all as Park City hosts a weekend full of opportunities—did you take advantage of yours?