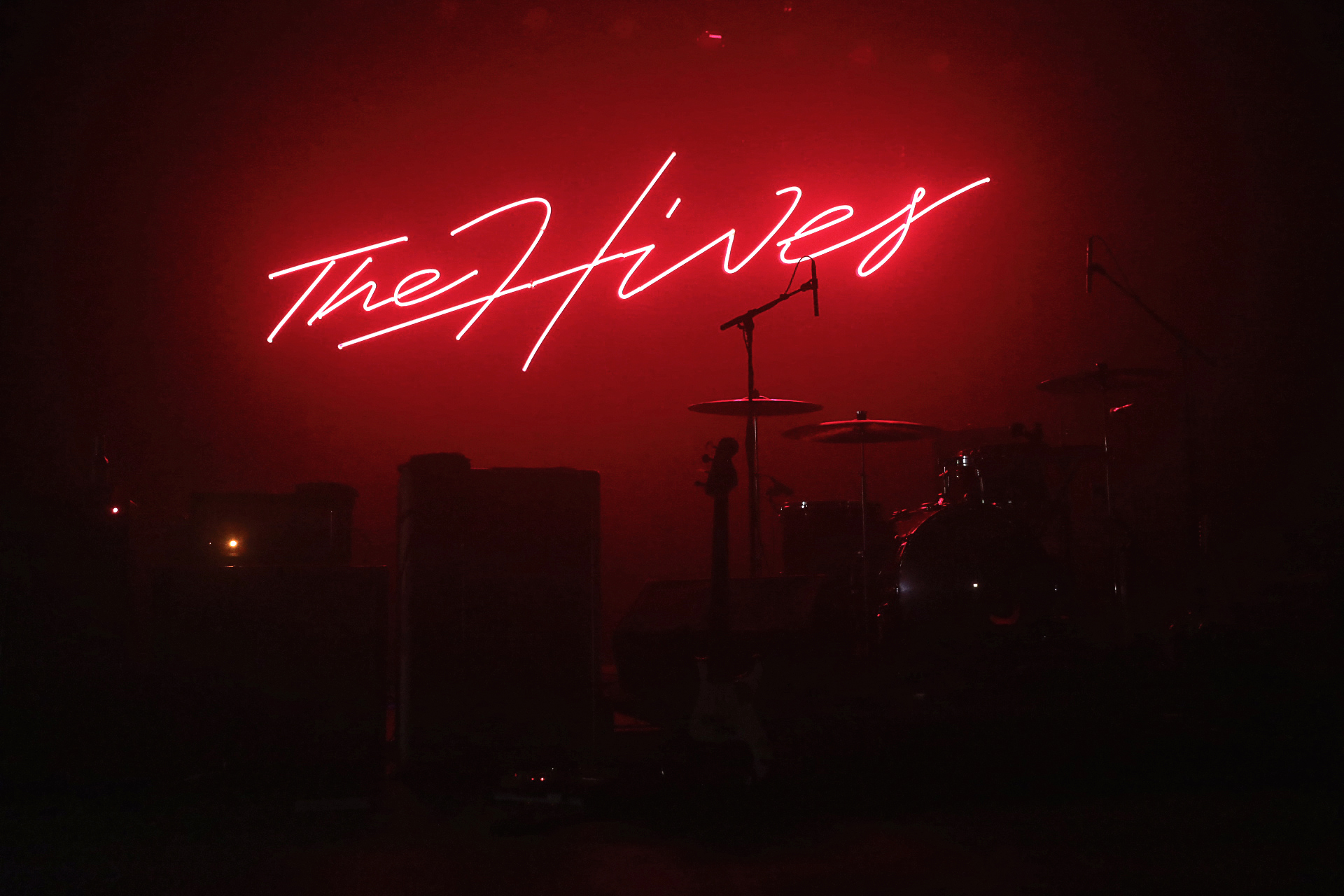 The Hives signage glowing behind the stage before the music begins. Photo: @Lmsorenson

The sunny springtime is a great occasion for getting some friends together, dress in black and get some Swedish punk rock in our faces. Refused and The Hives played together on the Scream Team Tour for the first time together in more than 20 years at the Union Event Center in Salt Lake City with supporting guest Bleached.

The lower levels were open, showcasing offerings of churros, soft drinks and  a pop-up beer bar in the 21+ area as fans trickled in to fill the open area between the stage and the soundboard. Bleached takes the stage in the dark and begins to play with lights raising to reveal members Jennifer and Jessica Clavin standing at the mics joined by Nicholas Grant on Drums and their touring bassist. As the room begins to fill up, the crowd claps, lets out some “Woo-hoos” and even starts cheering.

As the set changes and the sun heads down, people get a few beers in, grab their merch and are ready for the rest of the evening. The room is being pumped full of a light layer of smoke in the back as it makes its way overhead to the stage. The members of Refused emerge and make their way to their instruments. Screaming and dancing all about, front man Dennis Lyxzén bounces around the stage while members David Sandström, Jon Brännström, Kristofer Steen hype up the audience. The crowd moshes and tosses up some hands or horns, filling the Union Event Center with energy. Lyxzén steps over the monitors and off the stage into the middle of the fray, heading deep into the banging heads and shares the mic with them. In between songs, Dennis Lyxzén states his opinions about the state of sexism in Western Cinema, in Politics; stating that “If you ever watch a Swedish film, there will be uncircumcised penises everywhere.” He also states that there is a war on women and elaborates on why we shouldn’t let people legislate our bodies. As he closes his “rant,” he promises to play more after a few more words on encouragement before delving into fan favorites, such as “Blood Red.”

At this time of the evening, it is the height of anticipation for the finale. Again, the lights go down and a red glow reveals a neon sign that reads “The Hives” as the smoke continues to billow. Members Vigilante Carlstroem (guitar),  Christian Grahn (drums), Dr. Matt Destruction (bass), and brothers Niklas Almqvist (guitarist) with Pelle Almqvist (vocals) all appear in matching white ensembles and smiles on their faces. Niklas approaches the front of the stage before the music begins, egging on the cheering with a simple “come on” gesture and a hand to his ear, as their familiar riff and beat to the hit “Come On” begins to play and the lights and the volume turn up.

With cheers hardly stopping and every lyric being screamed from the crowd, The Hives talent and attitude spews forth in the music and the energy of the members, guaranteeing that everyone left this evening pleased, and as Pelle states, “pleasured, you know what I mean.”