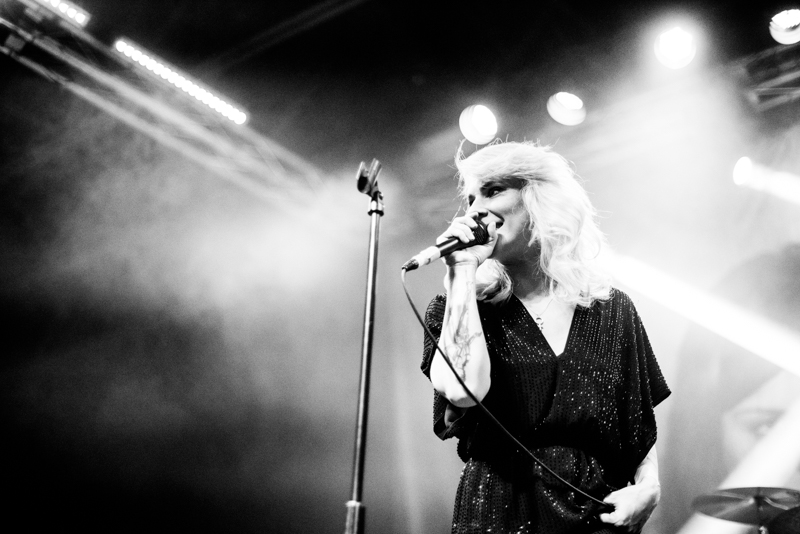 Maja Ivarsson on vocals for The Sounds. Photo: Gilbert Cisneros

The Sounds kicked off their North American tour for the 10-year anniversary of Dying to Say This to You on Tuesday, Nov. 15 at In The Venue in Salt Lake City. The Swedish group was supported by acts My Jerusalem and Zipper Club.

The show had a late start Tuesday evening, and from my experience, attendance at shows during the week are either hit or miss in Salt Lake City. The crowds gathered a little later than usual, but the floor filled and the show started off great with Austin-based group My Jerusalem’s indie rock set. The crowd gave a good response to the band. Zipper Club from Los Angeles played next, bringing more of an ’80s vibe. I had never really heard of the band before the show, but I did recognize their single “Going the Distance,” which had been featured on music sites over this past summer. After Zipper Club’s set, fans waited as the stage crew set up for the headlining band.

The Sounds finished off the night by playing Dying to Say This to You from beginning to end. They started off their set with “Song with a Mission,” and I was instantly back in 2006 watching them play at the Vans Warped Tour at the Utah State Fairpark. Bands start and end in 10 years, but The Sounds are still making music. The crowd sang along to their whole set while they played their album. Nostalgia permeated the night as everyone sang along to “Painted by Numbers” and “Ego.”  The Sounds also played a lot of their hits from their catalogue, including their newest single, “Thrill,” which dropped Nov. 10. Song after song, The Sounds had the crowd engaged until the end, when they finished the night with “Hope You’re Happy Now.”