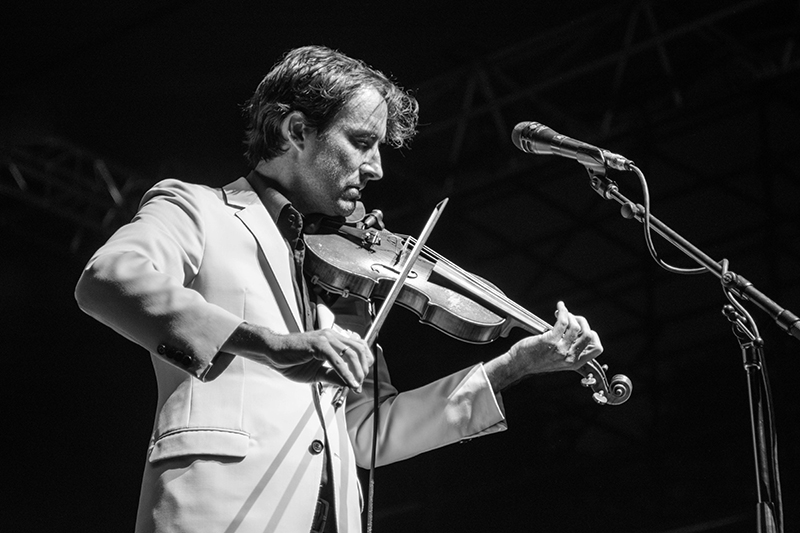 In the seventh week of the Twilight Concert Series, crowds of music listeners gathered under the baby blue sky. Pioneer Park was filled with the relaxed vibes of a warm, waning summer evening. Opening up the show, Talia Keys & The Love brought their powerful soul-funk rock to an adoring crowd. As part of the Rock n’ Roll Camp for Girls SLC, Keys welcomed many of her students, friends and fans to the Twilight series before both The Handsome Family and Andrew Bird played that night. Her energy imparted a general sense of calm to the park. The entire venue enjoyed the opening music, wandering through the shaded grass enjoying food and drink from the various vendors at this evening’s show.

The Handsome Family introduced a very different, playful vibe to the crowd. Their music carried dark interludes that were both hauntingly beautiful and poignant. Brett and Rennie Sparks are a husband-and-wife duo currently hailing from Albuquerque, New Mexico. Rennie Sparks wore a dazzling, sparkling dress and crooned beneath the dusky summer light. Their Americana vibes have been gracing the ears of many since 1995, producing 10 albums of their terrifically inspiring dulcet tones.

As the heat of the day turned to a cool, breezy evening, Andrew Bird emerged onstage, whistling his amazingly talented tunes. The Chicago native combined his violin and hypnotic voice in front of an awestruck crowd. Joined by his drummer and two guitarists, the band played many graceful, warm songs to a swaying crowd. Playing “Capsized” off his newest album, Are You Serious, Bird would elegantly switch from the violin to the guitar while occasionally tapping the xylophone in front of him. A phonograph spun in the background, highlighting the folky vibe of his musical talent. The crowd was lulled into a delighted stupor, captivated by the web of notes spun by Andrew Bird’s skillful hands.