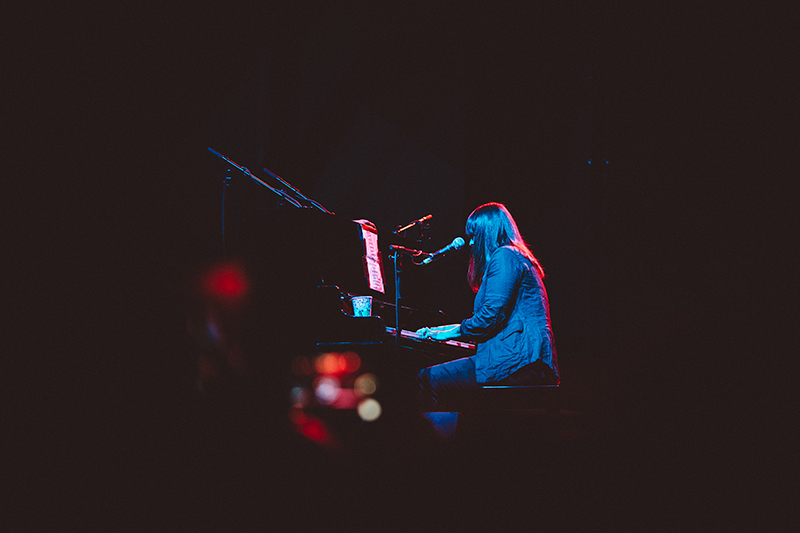 The crowd was really thick at this point and it was difficult to get a good shot, but Cat Power had stage presence that could be felt regardless of where you were watching. Photo: johnnybetts.com

This evening was proof of the power of the voice. While I was perusing Pioneer Park before the Aug. 17 Twilight Concert and taking pictures of vendors, patrons, artists and the like, I witnessed an amazing event. At first, there was some stirring from the speaker cones onstage and a few feedback peaks, but as soon as Belle Jewel started singing, it was as if a hypnotic tide had started receding.  This “tide” was calling people to the front of the platform to listen to an unknown yet somehow comfortingly familiar voice in the same fashion that the ocean calls the sand and shells from the shore to join in its party beneath the waves. People started materializing and filing up the spaces near the stage. Accompanied by local musician Joshy Soul, it is possible that Belle Jewel filled as great if not greater shoes than the acts that followed her and set the bar for what was to be an absolutely wonderful evening.

Phoebe Bridgers (L.A.) took ghostly form following Belle Jewel. “Ghostly form” meaning the type of ghost that grabs your hand via unknown forces and carries you to a melodically mythical place. Bridgers’ haunting songs created a silent stir throughout the crowd that couldn’t be heard and could only be joined through sonic connection. Many people came to the show to see Cat Power and left with much more than only a single talent.

Cat Power truly showed her experience in performing and her unique ability to craft what appear to be simple songs into symphonic masterpieces. She would start with one chord and then, without our even realizing whether or not that chord had changed, we would find ourselves swept into another world that most found better to experience while lying down in the grass or hugging each other for fear that something both terrifying and euphoric might happen.  At the close, in the same fashion that the tide slowly deposits its prey back on the shore, people slowly wandered back to their Lyft, bike or car to ponder what they had just witnessed and if it could ever exist again.