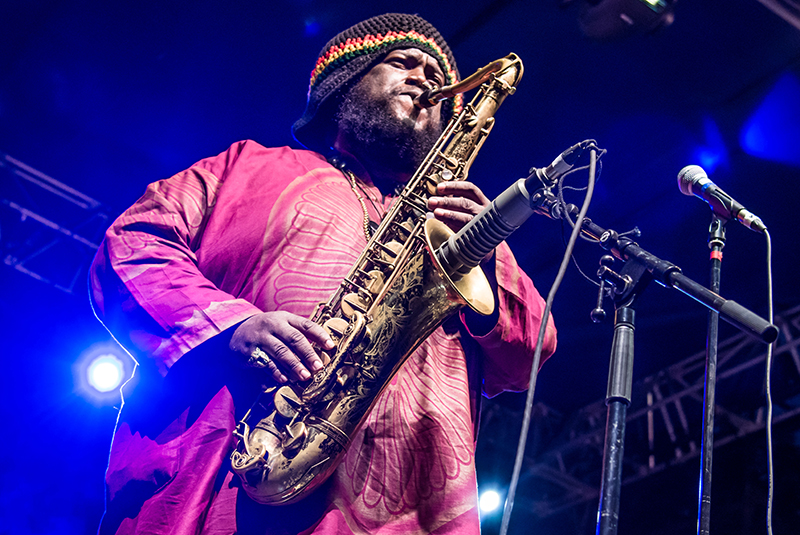 On an especially hot afternoon, the Twilight Concert Series opened its gates once again for the third show of their summer season. Local vendors like Normal Club Ice Cream and Uinta Brewing provided delicious treats to cool down in the scorching sun. The burnt honey ice cream cone was the perfect Twilight snack, sold out of a reflective old-school ice cream truck from yesteryears. Fellow SLUG photographer Tyson Call was snapping pictures of the interesting stylings of the people that had arrived to Pioneer Park for this evening’s show. A week before the upcoming 9th Annual DIY Festival (Aug. 11-13), Craft Lake City joined SLUG to celebrate this night’s events. On the other side of the stage, Urban Arts Fest had set up a live graffiti wall by Justified Ink to promote their festival on Sept. 16–18. People wander around the park waiting for the first local musician to start the night off.

DJ Ebenflow brought his dynamic musical set to the stage first. He broke into the DJ sceen 16 years ago and has been playing sets around the country. Despite the heat, locals came out to dance and support under the blazing sun. As the day began to cool off, 11-member band Antibalas stepped onstage. Their Afrobeat tunes have graced the stages of over 35 countries and they’ve performed around 2,000 shows, including one in SLC 12 years ago. Lead vocalist Amayo brought a positive energy to the park with his sparkling outfit and painted face. This energized band has performed with acts like The Roots and St. Vincent, reflecting their widespread musical talent.

Kamasi Washington was the main performer of the evening, filling the warm evening’s air with his jazz saxophone. Hailing from Inglewood, California, the band offered a very different sound to the Twilight crowd as the stage was bathed in red and blue tones. During his set, Washington highlighted each member of his band, including his father, a wonderful flautist. His fellow band members Patrice Quinn, vocalist, and Ryan Porter, trombone, brought their special talents to the band’s hypnotic sounds. Their energetic jazz rocked the crowd as the hot summer day turned into a cool summer night.