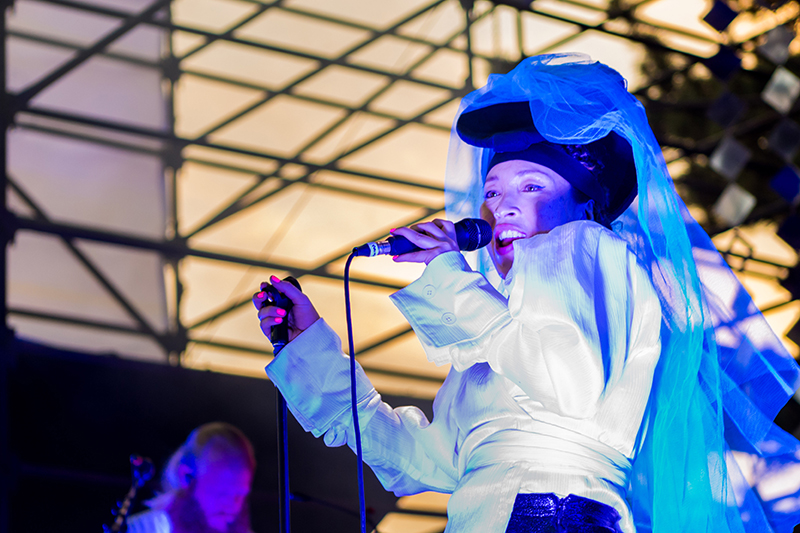 Little Dragon take the stage as the first Twilight headliner of the year. Photo: ColtonMarsalaPhotography.com

In the opening celebration of its 30th anniversary, the Twilight Concert Series welcomed Salt Lake City back to Pioneer Park. A steady trickle of people filled the park to enjoy the many food trucks, vendors and lounges. From Black Sliders’ ethical farm-to-truck food to Waffle Love’s sweet treats, everyone was treated to a delicious assortment of food. Food trucks like Poutine Fries and Monsieur Crepes were gathered by title sponsor Salt Lake Community College. Uinta Brewing, a partner sponsor, supplied a variety of brews to wash down all the pizza from Lucky Slice or the Korean BBQ from Cupbop. Vendors like the Hand Drawn Photo Booth and Mineral and Matter showed off their cool creativity with quick sketches and delightful jewelry. With the stage set and the crowd waiting, the 30th anniversary season started with a bang!

Local opener Angel Magic performed their experimental synth pop for the first Twilighters. Next up, Xenia Rubinos brought the crowd her sensual powerhouse vocals. As she danced across the stage, the Utah sky lit up with a fiery sunset to welcome the headliner, Little Dragon. As the crowds began to gather, the Swedish electronic band welcomed them to a beautiful stage where diamond mirrors hung from the sky and Yukimi Nagano showed off her first costume of the night, a Maleficent-style headpiece. Their music attracted a big crowd to hear them play; for some, this was the first time they had heard the group outside of their many collaborations with artists like Big Boi, Flume and Gorillaz . Nagano finished the set with a costume change into a vibrant combination of silky fabric and wired lines. Their wild sounds echoed throughout the downtown area, bringing old and new fans together to celebrate the kickoff of the 2017 Twilight Concert Series.