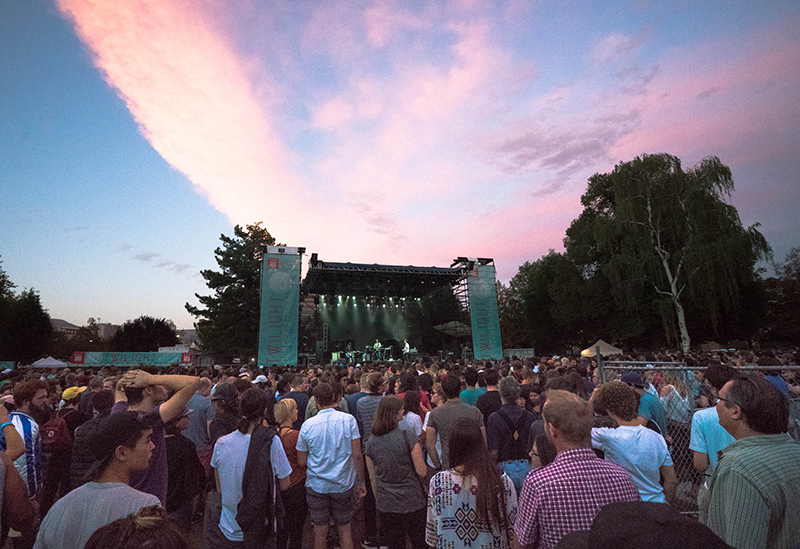 Jagwar Ma had the crowd amped with their kickin’ tunes. Photo: JoSavagePhotography.com

I cleaned my brand new Vans in the kitchen sink of the dusty coat they earned from my dancing in the energetic, moshing crowd at Grimes’ Twilight Concert Series show at Pioneer Park on Thursday. Smiling, I remembered the wild spirit of the masses and the sweet sounds, heavy bass, crazy light shows and dance that Grimes’ performance encompassed.

At Grimes’ request, we did not take photographs during her performance, so out of respect for the artist, there are no photos of her or her performance in this gallery. However, she drew an eclectic crowd, and the openers, Elytra, Hana and Jagwar Ma, made for engaging and danceable shows.

Prior to Grimes performance, attendees at Pioneer Park lounged in the grass, hung out under trees, got food and tasty beverages from the food-truck trailer park and beer from the beer tents, or danced at the stage to the openers.

Salt Lake group Elytra put on a spectacular performance with cool style, great lyrics and danceable tunes. The second performer, Hana, lives in L.A. and tours with Grimes.  She has a similar style to Grimes in that she plays the keyboard, mixes beats and carefully sings challenging notes. She kept the melody and rhythm all while dancing and captivating the audience.

Jagwar Ma, originally from Australia, primed the patrons with their progressive psychedelic rock and dance sounds.

I did not realize how influential Grimes’ style statement is to her followers. It only makes sense, as she is proud of her uniqueness via music, message and vibe, encouraging everyone else to be elated about being themselves and having fun. Walking around Twilight on Thursday, it was commonplace to see attendees wearing giant angel wings, neon-colored hair in various arrangements and more—I think I saw one person wearing a bridal gown.

During Grimes’ act, she had her second performer, Hana, join her onstage for backup singing and dancing, along with her two super rad dancers. Grimes took the lead, singing, mixing and looping sounds. Hana sang, and the four of them danced, feeling at times like this hot, avant-garde, female pop group with sporadic, climactic drops where the crowd would go nuts with the music—along with Grimes’ occasional death-metalish vocals.  It was a fun mashup that energized the Twilight-goers.

“I love the dancing and the energy out there, Salt Lake!” Grimes said to the moshing crowd. “I probably shouldn’t condone it, but I appreciate it!!” she giggled. Cleaning my new shoes of their badge of dirt-honor was a task that I proudly accepted.