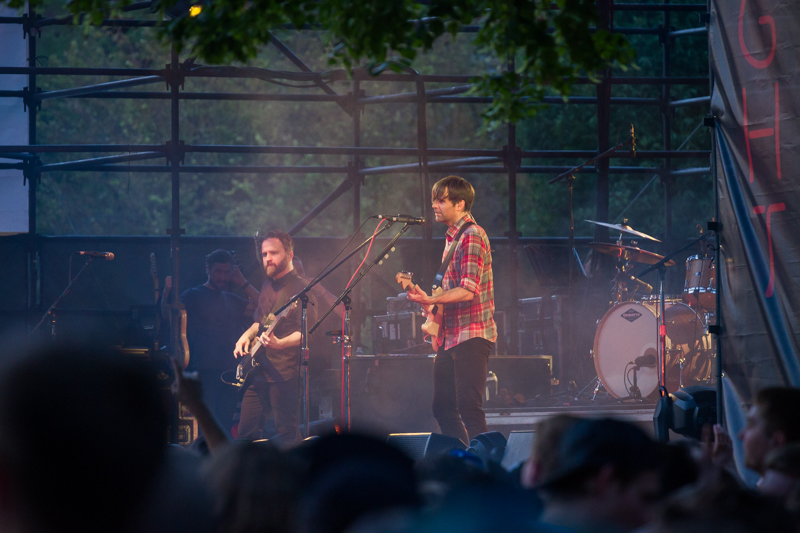 As their set begins to wind down and dusk sets over the park, Death Cab for Cutie thanks the crowd by playing some of their songs from their first album. Photo: Talyn Sherer

The annual Twilight Concert Series broke ground on Thursday night as thousands of fans came out to bask in the music of Death Cab for Cutie and tUnE-yArDs. Pioneer Park played host to the event in an effort to bring as many fans together to witness these incredible bands perform. tUnE-yArDs opened up the series with their eclectic sound that evolves with each and every song. Seasoned fans knew what to expect, but as the crowd increased in size making movement near impossible, those who were unprepared quickly adapted to the growing fan base that surrounded them. Death Cab for Cutie was the perfect headliner to open up the series as their unique tones and memorable lyric complemented the beauty of Pioneer Park at twilight. Their performance on Thursday night helped set the pace for what is to be expected from the series going forward with more and more diverse bands coming in the weeks to follow. Fans of the Twilight Concert Series are dedicated to come out and dance the night away each week as they are introduced to familiar and unfamiliar bands all for the price of a $5 ($10 day-of) ticket. Whether you dig the music, the people or just want to get drunk and jam out in a park, the Twilight Concert Series has something for everyone.