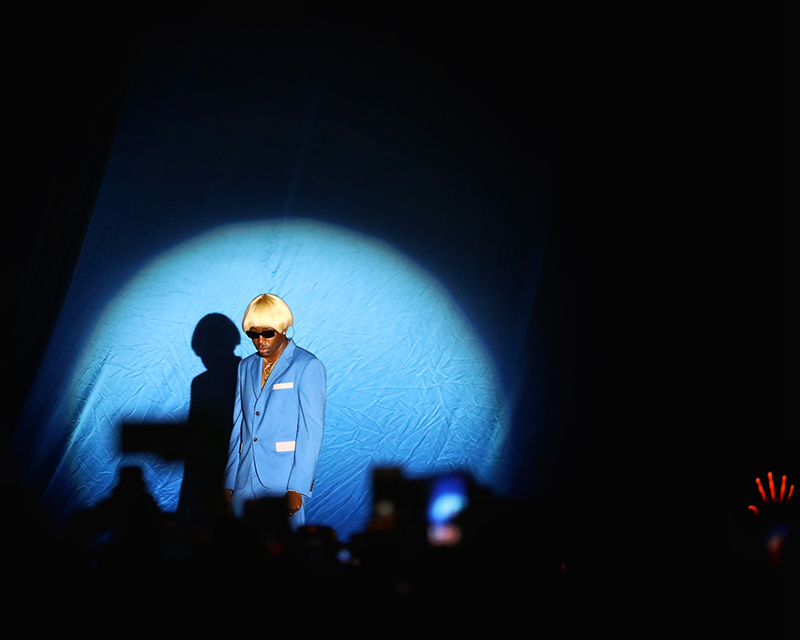 Venue doors open at 5pm, and within ten minutes an eager all-ages crowd is filing in. Traffic is backed up. Fans skip excitedly towards the show from their distant parking spots. As swathes of ticket holders are given the wand and cleared through security, they either make their way into the merch line for a shirt or past the Saltair interior to the outside stage on the opposite side of the building.

Fresh, cool air, fills the setting with golden tones everywhere as the artist Goldlink is already finishing with his set, lamenting that “this is one of the most beautiful places I have ever seen in my motherfucking life.” As a horde of stragglers continue to seek parking, they miss out on this supporting artist. Next up to the mic is English musician Devonté Hynes, better known as Blood Orange.

With a giant three-panel landscape screen set up just behind the stage area, Blood Orange and his supporting talent approach the stage backlit by what seems to be clips from music videos and home movies that play silently as the music takes over. With mellow, soothing R&B tones, Blood Orange stays light and vocally focused for the beginning of the set. Accompanied by two supporting singers, the vibe of the music is a mixture of 1980s/1990s–inspired gospel-funk with sparkles of indie rock and electronic pieces as well. Dancing with the crowd as he moves around on stage, Blood Orange sings of times past, friendships, relationships and hardships and shares the stage by giving time breaks to his supporting vocalists, each contributing their own lone tracks or solo performances.

The sun is now well below the horizon and the air becomes colder. You can see clouds of smoke puff up from the crowd as they huddle together just a little closer, conversing as they anticipate the next performance. Chants of “Tyler! Tyler!” swell up every 10-15 minutes and then trail off as it becomes apparent that the house music is not giving up. All is not lost however, the collection of persons front & center pass the time under the open sky by throwing bottles of water above their heads as droplets cascade over unsuspecting patrons, highlighted by the stage and now moonlit night.

A spotlight appears and the static blue curtain grabs the audience’s attention as Tyler take the stage donning his now-signature wig persona while the music blasts to a roar of pleased fans. Standing stoically in the spotlight, Tyler calculatingly waits at attention in an almost freeze-framed position, anticipating the perfect time, the perfect split second of strobe lighting to break formation and dance himself into a frenzy. This cat-and-mouse game with the strobes and the blackness lasts for the first track and ends with the audience jumping with the beat and shaking the ground. The evening continues in the fashion of die-hards shouting back every word, picking up on cues as they lose themselves in the music. And the rest of the crowd? They had a blast too.

Tyler, the Creator: Over Before It Started