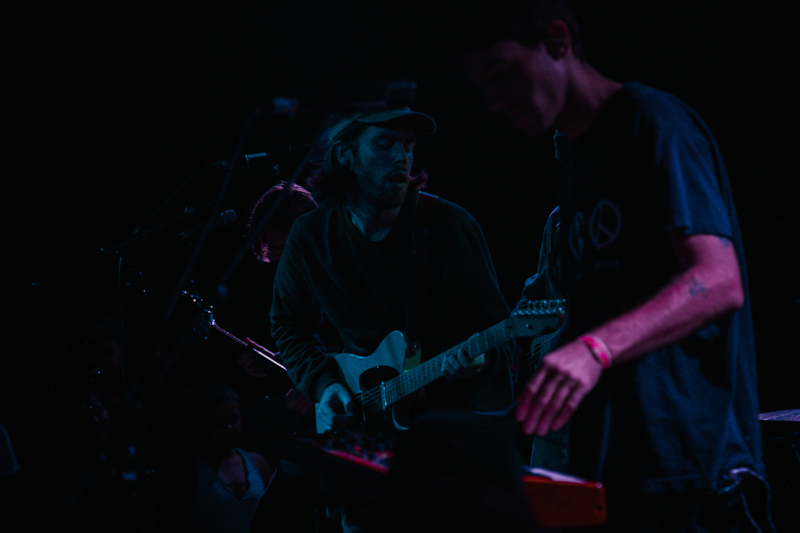 A shared moment with Tatum and Kallman.

The marquee above the bar at RYE was marked with a warm greeting for our visitors from the south on Saturday, Nov. 3. “Welcome Wild Nothing” adorned the sign and anyone that egressed from the bar around 7:30 was greeted with a block-long line next door. Wild Nothing and openers, Men I Trust, drove a rowdy crowd to Urban Lounge and though the show didn’t quite reach sold-out status, the newly renovated space—which seemed to have more standing room—felt like it might burst at the seams.

Canadian indie-dance group Men I Trust opened the night’s entertainment to raucous applause. Emmanuelle Proulx, Men I Trust’s lead singer, could barely squeak out a “thank you” loud enough to be heard over the cheering between songs. The dichotomy of the group’s gentle, driving music, delicately delivered vocals and the crowd’s untamed energy was incredibly stark, and though the band performed a flawless and confident set of music, the crowd seemed much more attuned to the night’s headliner.

Jack Tatum and his band took the stage and launched right in to a set full of singalong-able hits and channeled the crowd’s vigor with their driving rhythms and dreamy, swirling guitar riffs. It was easy work winning over an audience like the one in attendance on Saturday, but if there was anyone hesitant to buy in to Wild Nothing’s performance, keyboardist, Matt Kallman won them over as soon as he picked up the saxophone. Arguably the most understated performer in the group, Kallman drew everyone’s attention as soon as he picked up his sax and held it until the moment he put it down. Wild Nothing returned to the stage for an encore featuring a handful of tried and true fan favorites and, of course, more sax solos.