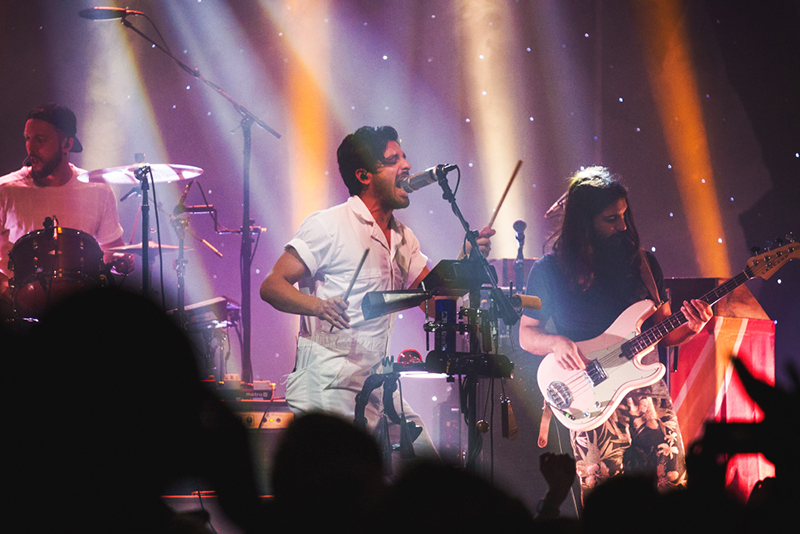 Young the Giant’s Sameer Gadhia moves to his own personal rig of noise, complete with a cowbell and all. Photo: Talyn Sherer.

If there were ever a soundtrack to define the 2010s, Young the Giant would surely appear at the top of that list. Formerly known as The Jakes, Young the Giant quickly became a household name in 2010 when their hit song “My Body” shot straight to the top of the Billboard Alternative Songs chart. Since then, they have been met with wave after wave of success. A purely musical melting pot of culture and sound, Young the Giant are staffed with members of different backgrounds, from Persian to Indian to French to English. Sameer Gadhia helped form the band after he put a halt on his studies at Stanford University, where he was studying medicine. While it was a huge risk to put school on hold, the world has benefitted for it, as his music has helped shape the current generation. Saturday night was like a watching a musical dissertation take place before our eyes. With opening act Lewis Del Mar showcasing their unique and stylistic sound, and Young the Giant massaging the eardrums of every head in the crowd, the complete euphoria of the event was groundbreaking. The sold-out show at The Complex was of no surprise to anyone who has followed the success of Young the Giant, as each album they produce seems to be riddled with hit song after hit song. Their latest album, Home of the Strange, has proved itself to be one of the best albums the band has released to date, and seeing it performed live is a bucket list–worthy experience that everyone should check off.