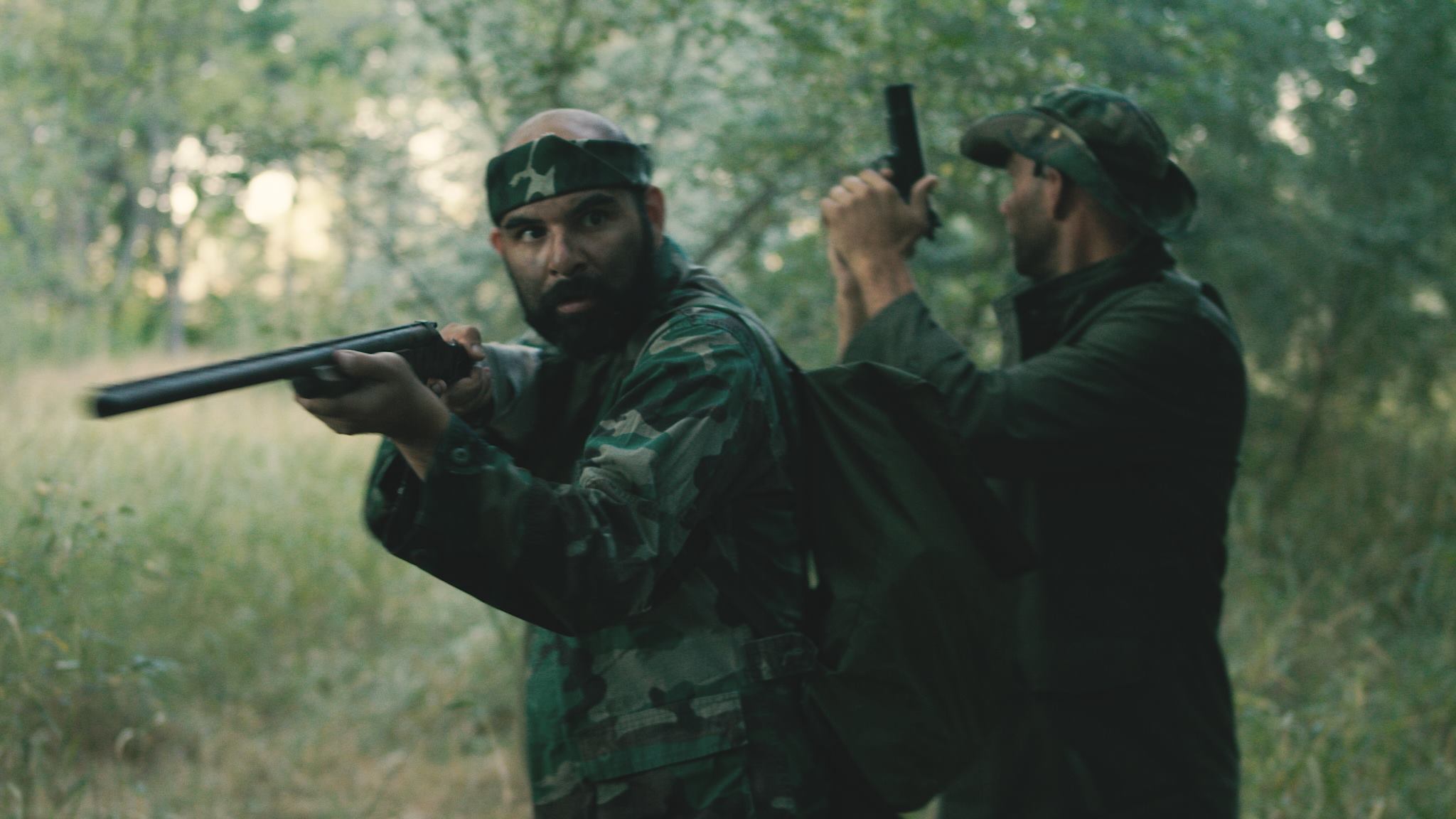 Dead things have a way of getting in my head. Seeing them splashed up in front of you in Creative Guild Studio’s completely cozy environment is an oddly suiting contradiction. Director/Actor Oscar Sanchez is sitting to the right of me, but in front of me, on screen, he’s a mess of bloody circumstance. Creative Guild Studio’s premiere of Lucre Films’ productions, F.U.B.A.R. and Criminals,  was everything an enjoyable evening viewing should be; funny, scandalous and full of potential abandonment and dead things.

Creative Guild Studio wheels in theater chairs attached in long rows for this event. The rows are stadium style, and rise as they proceed back. This is notable, because the skeleton-like construction of these rows leaves my feet dangling a foot from the floor as I sit. I don’t know if you’ve ever watched a film while swinging your legs like a kid on a swing, but it’s fantastic. The youthful indulgence is magnified when you consider the studio also had treats to offer, as well. As my legs were swinging, I had a snack and beverage in hand. This is a proper way to enjoy film—I was cozy, fed and ready.

Films are generally taken in separately. Being this was a double feature, I’d like to take a moment to consider these two films in the same breath. Though these films feature some crossover in both themes and actors, they really couldn’t be any different tonally, and that’s what’s make the pairing so effective. It was a one-two punch, featuring desperate men in two varying positions, but where one leaves you haunted and wondering, the other leaves you chuckling with its tongue-and-check presentation. Humor rings well after horror and this was excellent film pairing.

The desperate men in Friday night’s first film, F.U.B.A.R., are stranded in non-descript military attire, out of touch with HQ and trying to survive in a crumbling circumstance. The film is at it’s strongest when all of the actors are working together, and you get to feel the camaraderie these performers developed working together over the three-day shoot. This also works to a fault, because, at times, the actors perform dialogue so casually that their firearms moved as if they were talking with their hands. This act undermined the situational intensity at times, but also made the audience smile. So, it’s a soft criticism at best. The sound in the film was used to great effect and drew me into the focal points. The look of the film (Ursa Mini Pro) seemed to have two different personalities. The initial feel catered to the abandonment situation, with its focus on environment and situation, but as the film progresses, the camera work becomes more intimate and the focus shifts from the environment to the characters with it’s dark, silhouetted close-ups. Speaking more about the details would compromise the film, just know it is rather haunting and you will wonder about F.U.B.A.R. afterward.

In Criminals,  these men are a different lot all together. Somewhere in the production process, you almost wonder if someone said, “What would Quentin Tarantino’s take be on Pineapple Express?” and the answer was this film. Criminals  is a bit more nuanced than that idea, and the humor is uniquely cheeky, which compliments  Director Casey William Walker’s presentation of the narrative. I could almost hear the laughter between takes. The film sits around two characters in an impossible situation involving a death of a lover. With a clean resolution to the film being thrown out in the first minutes, (think: Shaggy finding out Scooby Doo was in a relationship with Fred and killed Fred for dating Daphne as well), we accept the madness of the situation because there is no other recourse. We accept the absurdity which makes Sanchez (returning to act) ability to chew up the screen with offbeat, stoner antics so much more enjoyable. While the film displays a difficult situation, it doesn’t transition that burden to the audience—making the film light hearted and ultimately fun.

One of the more potent moments of the evening came during a Q+A session, where Sanchez was asked why he worked on these films. He answered, “I wanted to be reminded of why I did it,” which I found brilliant. Art comes from any source but ultimately, it’s function can be, via Gertrude Stein, “to induce hope.” What’s missed in that statement is that hope doesn’t always come from the person perceiving the art, sometimes, that hope is for the artist themselves. There’s a genuine feeling that comes from art made for yourself and great fictions come from genuine hearts. Criminals and F.U.B.A.R. were incredibly genuine films and hold up well in the lofty ranks of Utah film.