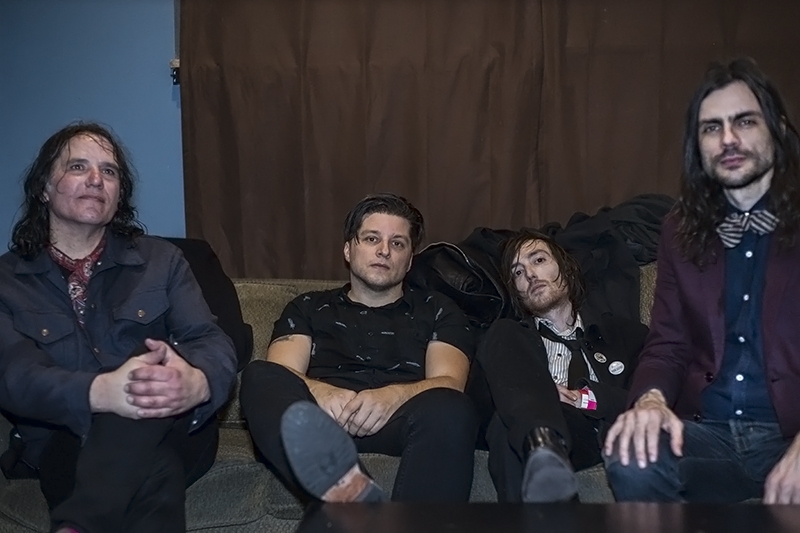 The Relationship hangs out in the prep room at the Urban Lounge. Photo: mikeybaratta.com

A Shadow in the Relationship

It dawns on me that there is actually a period of time before and shortly after 7 a.m. when the sun is not present over the skies of the Land of Zion. This divine awakening comes as I walk toward Coffee Garden while blasting Kim Fowley’s “The Trip” through my earbuds. Though I have to ask myself what on earth, heaven or hell can raise me from my crypt this early on a January morning, I am keenly reminded by the adventure I am about to embark on that blends Almost Famous and A Hard Day’s Night into a 12-hour-plus extravaganza. Today, I am going to be shadowing the lads from The Relationship as they take on Sundance and Park City.

At the café, I take a seat and sip my highly caffeinated coffee. Within moments, I observe a sharply dressed Brian Bell stroll in and grab his morning expresso. Not wanting to disturb him before his first cup of caffeinated joy, I sit back and chill until Nate Shaw shows up with members of The Relationship’s management. It is quickly decided that I will ride with Shaw and the management in the tour van. On the way up to Park City, topics of conversation cover Shaw’s love for skiing, the clear evidence of Climate Chaos and prepping for the interview at the Wasatch Brew pub. The latter topic has a focus of (if necessary) steering the X96 interviewers away from topics that edge too close to Bell’s association with Weezer by emphasizing the subject at hand: The Relationship.

Filing into the Wasatch Brew pub, I notice that the Jon LaRue and Anthony Burulcich are not present for this initial interview. “They’re still in L.A. time” says Shaw. The interviewers are none other than Bill Allred, Gina Barberi and Kelly Jackson from Radio from Hell. It’s interesting to put faces to names that I’ve only heard over the airwaves—though, I confess that I’ve never had a real interest in the critically acclaimed talk show. Still, it makes great PR sense to tackle the “Holy shit, this is early” audience with the folks from Radio from Hell. Shaw and Bell seem in great spirits and even manage to take their hosts’ friendly jabs with good humor.

The dynamic duo explain the history of their band and their first album, eagerly promoting the Oh Allen 7” that is going to be released through Burger Records in March. The interview also covers some promotion for the ASCAP show, which is a part of an exclusive event later in the day. In regard to this, Bell says, “I don’t like this exclusive stuff.” He then proceeds to talk up the Urban Lounge gig on Jan 25. After all is said and done, the duo poses with some fans in front of the X96 poster.

During this interview, the lads learned that, later in the day, they will be performing an acoustic set at the Wasatch Brew Pub. This comes as a bit of a surprise, but does not detour their creative determination. As we make our way to ASCAP building, Park City seems to be coming to life with the activity surrounding the Sundance Film Festival. After all four bandmates reunite, they quickly go through the motions of a sound check for the gig later in the evening. Following this sound check, the lads have another brief practice / experiment to knock out a few numbers acoustically—mostly. They decide to perform the songs off the Oh Allen 7”. Their set comes across as solid, and when it is time to go back to the pub an hour or so later, The Relationship delivers and then some. It’s pretty good for being totally on the spot, but then again, these guys are far from being amateurs, and their (mostly) acoustic performance of “Oh Allen” and “Young Temptations” earns them new fans.

The end of the impromptu session sees the lads continuing on to yet another interview at the Billboard. In almost comedic fashion, we go through a labyrinth—in one door and out the next only to find ourselves back where we started. Finally after this the band gets a break from the hustle and bustle. I take off with Shaw and LaRue. As we make our way back to the ASCAP green room—which, for today, operates as home base—we find ourselves some comfortable seats next to a fire pit. There the two start dissecting the modern foundations of rock n’ roll. “In a lot of ways, rock n’ roll has become a bad stoner joke,” says Shaw. “I feel like rock’s lost all those great educational years of punk—washed away by people just wanting to be liked, be PC and appear kosher in interviews like corporate spokespeople.”

LaRue says, “Speaking your mind’s a good thing… Rock n’ roll’s always about non-conformity. That’s the reason so many young suburban kids end up turning to rap and hip-hop. It’s because their parents don’t understand that. Their parents grew up with punk rock, so it’s like playing a Sex Pistols record doesn’t piss off mom and dad—like some music they don’t understand, that excitement has sort of disappeared from rock n’ roll.” On the note of providing meaning through music, Shaw reveals that he is looking into showing visible support for school teachers—citing their obvious importance to developmental education.

Back in the green room at the ASCAP building, I take down a bottle of Stella Artois. I had been told earlier in the day that I had free reign in the green room, and all I could think through my shit-eating grin was “famous last words.” I am told that that band had not really expected a sound check, so every performance was being treated as a pop-up session. When The Relationship takes the stage, it is clear that there is keen interest from the gathered assortment of people. They start out with “Young Temptations” and continue knocking out numbers like “Rather Be,” “Ain’t It a Shame” and “Oh Allen,” much to the appreciation of the audience. It is clear, though, that some of the interest in The Relationship does stem from Bell’s association with Weezer. It also helps that The Relationship provides a ’90s pop but heavy rock n’ roll feel—so I’d imagine it’s a little difficult to escape that particular legacy. That being said, these guys definitely have the ability to stand on their own—as they give a performance that keeps the assembled audience captivated. I even spot some jerking about from members of the crowd.

During the latter half of the gig, Shaw announces that during any show he performs school teachers will get in free of charge. This announcement meets with clear enthusiasm from their audience and it appears that teachers are among tonight’s crowd. It seems socially conscious rock n’ roll isn’t quite dead yet as one former educator Kim Zermianin says, “That made my year.”

Back in the green room that lads discuss the possibility of an after party. I’m up for continuing this adventure with the assistance of several pints to take off the edge. However, after a long day of hoofing it about, I am a bit self-aware of my less-than-pleasant body odor, and I fear knocking some unfortunate soul dead due to my fresh aroma. So, in earnest before the fun begins, I go out in search of deodorant and quickly find that there is almost no place on Main Street that sells it. It must be because Park City folk do not perspire—maybe something to do with the elevation. After many wrong turns and being turned away from the Sky Lodge by some rather large chaps in fitted suits, I find myself at the Marriot—the only place to buy a little stick of deodorant.

When I get back to the green room, things are winding down, and everybody is going their own way. Fear not, kids: Yours truly doesn’t end things on this particular note. Rather, I leave this adventure with the words “anything on the menu” hanging in the air—famously uttered by an ASCAP representative who treated the photographer and me to a sushi dinner and drinks. Now, imagine that shit-eating grin.