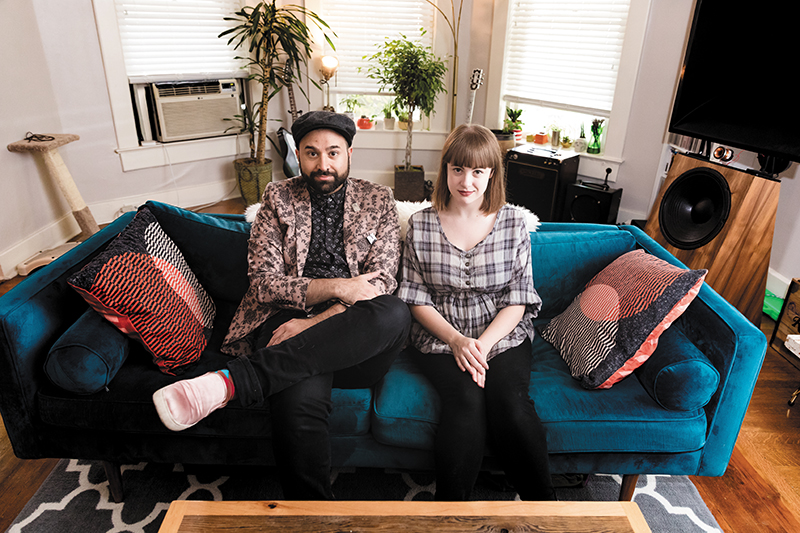 Halloween is a gift that transforms an entire month into a time when everyone ups the ante—more parties, more fun, more weirdness. As summer switches off and the air is imbued with the strangely homey, charming smell of cold and decay, this seasonal spirit sparks new life into our local scene. That’s why, in the spirit of the season, Albatross Recordings and Ephemera  has planned their event “Meet the Creatures,” an evening for indulging in everything spooky. Albatross founder/owner Timo Hatziathanasiou and Salt Lake Film Society Manager of Marketing Annie Jenkins discuss what inspires them at this time of year and what we can expect from their creepy, freaky endeavor.

Hatziathanasiou says that they’ve long held Halloween parties at Albatross, since the opening of the shop’s first location. “The first location on 9th and 9th was opened in mid-October, so the first thing I was able to do was a Halloween event,” he says. “The store was so new at that point [that] the turnout was pretty minimal, but it was still really fun.” He says that at that event and the small gatherings that followed later, after they’d moved to their current location on 1300 S. and 900 E., they’d have friends play Halloween shows, usually accompanied by the straightforward, can’t-go-wrong additions of decorations and candy. This year they are switching gears, looking to a bigger venue that’s more party-friendly than their shop locations have been. What better place to go to for a party than a bar? They’ve settled on The Ruin, which is in Sugarhouse on the newly popping-off Wilmington Avenue, an ant-thin street wedged between towering buildings home to many local up-and-coming businesses.

With its new home, the event will be strictly party-focused, with fellow event co-organizer Cesar Reyes’ Super 78, Hatziathanasiou’s project Echopraxia and other live acts playing sets, and with a general dance party going on otherwise. For food, they say that new SLC food vendor Mercado will be there with their assortment of internationally imported snacks and treats, to lend a sort of trick-or-treat feeling. Party-goers can escape the $3 cover (though it is donated to Best Friends) if they come through dressed to the nines in a costume because, of course, there’s going to be a costume party. Jenkins says that the theme of the party is pretty much to encapsulate that nostalgic essence of Halloween: “Old Universal Creature From the Black Lagoon meets Elvira,” she says. “I think we want to encapsulate those Halloween events you would go to as a kid. That feeling of being so super stoked about it but it being more of an adult event.” Hatziathanasiou chimes in that movies will be playing in the background, potentially Frankenstein and The Monster Squad.

On the more adult side of the theme, though, is probably their inclusion of free tarot and palm readings—something that probably wasn’t present at our elementary school Halloween parties because we’d have all twitched in our chairs before running off or being snatched away from the wickedness by our Mormon moms. Good thing growing up grants you patience and a respectful, enthusiastic interest in the occult. Lindy Stokes and Hatziathanasiou’s mother Leah will do tarot and palm readings. After you get your death omen, you can go have some fun decorating your own coffin, a little craft setup they plan to have where you can use chalk to personalize your own mini coffin-shaped stash box. How many “666s” will be marked down on the boxes is only speculation at this point, but I’m sure it will be enough to designate this as one of the adult activities of the night. If you want a peek at what those will look like, or lack an artful touch of your own, Hatziathanasiou says they’ll be selling a few at the next Vague Market.

Both Jenkins and Hatziathanasiou have spent time out east, so both know what the spirit of a true fall feels like. Jenkins says that the goal of Meet the Creatures is to establish the lighthearted feeling of the season, because she feels that last October had a bit of a funky air. By that she seems to be insinuating the actual fear surrounding the election season. This time around, they want to cultivate an atmosphere that is playful, nostalgic and fun, or as Jenkins remarks, “An excuse to go out and be joyful.” So whether you go to see the musical performers (much cooler than the music at your childhood parties) or to slay it in the costume contest, know that Albatross wants it to be just as spooky of an evening as you do. Be there Oct. 27, catch doors at 8 p.m. for this 21-plus event. Watch for more information at instagram.com/albatrossrecslc.

Editor’s Note: After SLUG already submitted the October issue to the printer, unexpected circumstances required a venue change for Meet the Creatures. This digital version of the article has been updated from the original print piece to reflect the venue change.