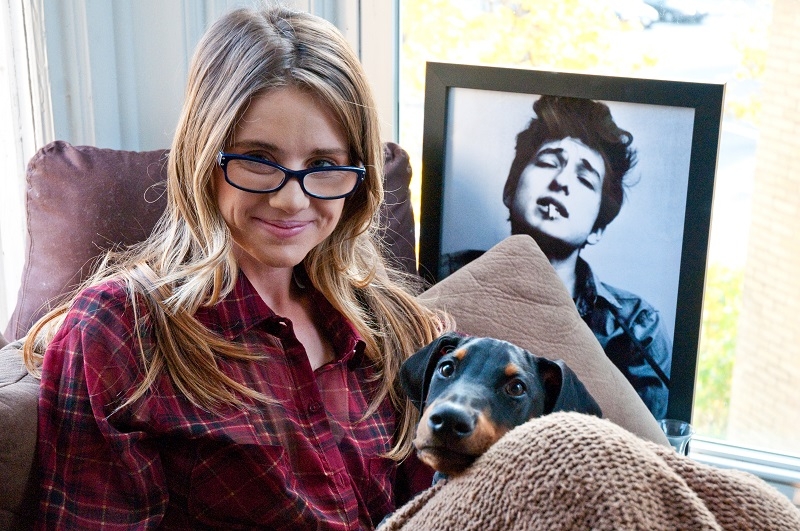 An Interview with Brooke LaChance

Mary Brooke LaChance does not look like someone battling Stage IV Melanoma. She is young and strikingly beautiful, with softly glowing skin and a sweet smile. She decorates her body with tattoos and she is engaged to be married. When I met her, she invited me into her home and spoke to me gracefully as sunlight from her daybed trickled onto her face and her puppy, Bruce, slept in her lap. She stroked his ears as she told me about tumors, chemotherapy and recovery without a tremble in her voice or tears in her eyes. It is her story, and she is not ashamed or afraid of it.

At age 17, LaChance was diagnosed with cancer for the first time. It was in the lymph node regions of her body and after a few simple surgeries and a year of treatment, she marked “beat cancer” off her life’s accomplishments and moved on. After 11 years of remission, she began experiencing strange hip pain and, after multiple scans and bone biopsies, was notified that her Melanoma had returned and spread to her lungs, femur, hips, collarbones, shoulder and brain. The cells spread so quickly in two months that her hip was actually broken from the force, and she was given a total hip replacement surgery. “When I heard it was back, I thought, oh okay. It wasn’t that bad the first time,” she explains. “But this treatment is less predictable.” LaChance is on two types of chemotherapy as well as radiation for her brain tumor. “Right now, I’m focusing on recovering my most recent surgery. Hopefully everything starts working and we’ll get rid of this thing.”
When asked how she would describe how it feels to kick cancer’s ass for the second time, she was overcome with gratitude. “I have never felt so much support. Not that I didn’t have support the first time around, but there is just so much love being sent my way.” LaChance is absolutely right in this—she’s got an army of loyal friends, family and community members at her side. Her dear friend Becca Corey organized the Mary B Lucky Foundation in LaChance’s name to raise money for her treatments. There have been several events organized to help with funding as well, including a silent auction at Willie’s and a 5k run. Because of the severity of her cancer and the level of treatment she is receiving, LaChance cannot work and faces enormous medical bills. In case you didn’t know, having cancer is one of the most expensive things that can happen to a person—which is cruel, considering that chemotherapy makes it very difficult to function normally, let alone earn enough income to pay it off.
LaChance relies on lots of sleep, soft blankets, puppy cuddles and visits from friends and family to heal and look forward to the future. When asked what people who want to reach out can realistically do to help, she responded, “The more people I have behind me, the better. It keeps me going and keeps me strong. Nobody has been annoying or intrusive.” LaChance wishes to give a huge shout out to her fiancé, Joe Mandl, who provides with her daily love and care. She also wishes to thank all of her friends who have initiated benefits in her name, as well as every single person who has given money or just sent her good vibes.
If anything can cure cancer, it’s the collective well-intentioned energy of a group of people who care. LaChance has quite a bit stacked up against her, but she has the experience, wisdom and fearlessness she needs to beat cancer twice. However, she can’t do it without the support of loved ones and strangers alike. Please consider donating whatever you are able to her Giveforward campaign, and if you aren’t able to give anything monetary, send LaChance all the mental hugs you can spare.
Photos: