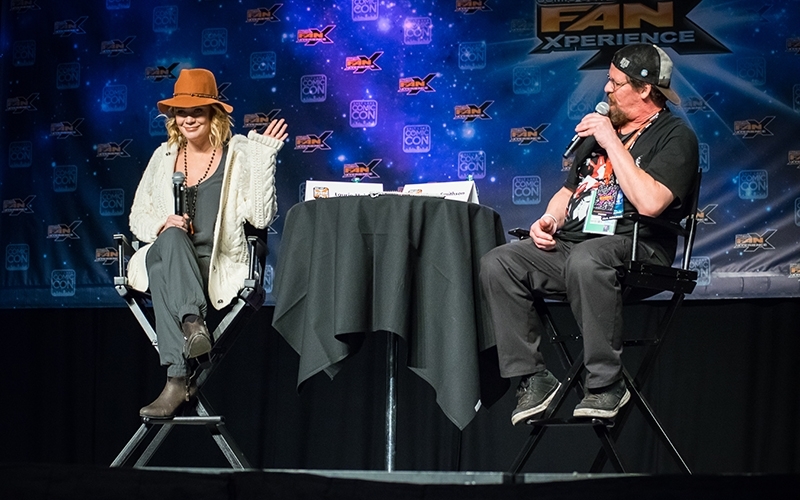 Laurie Holden, most recently known as Andrea from The Walking Dead but forever in my heart for her role in Silent Hill. RIP Cybil Bennett. Photo: Matt Brunk / unlifephotography.com

“Fuck Andrea!” That was the thought I had pretty much every time Laurie Holden’s Walking Dead character was on screen, throughout season one of the show. She was just goddamn whiny and always said and did the exact wrong things. But, maybe more than any other show I have watched, she evolved on screen … Andrea grew up and grew on me, and her death on the show probably affected me more than any other character’s on Walking Dead and beyond.

Fast forward to Thursday, and Ms. Holden’s Fan X panel. I was there not only as a huge fan of her most famous character, but also of her as a human being. You see, Holden has been working with a local charity called Operation Underground Railroad. This group of badass motherfuckers (a number of them ex military and police, etc.) go into some of the most desperate and dangerous places on the planet and rescue enslaved human beings from their captors. And Ms. Holden isn’t just a spokesperson for this group … she’s there, side-by-side with them, saving these hopeless people. Incredible.

The panel, beyond the talk about Holden’s human rights work (which was the best and last part of the panel), mostly focused on Andrea, the similarities between the actress and the character, the show and its tight-knit cast, overall.

“I don’t watch the show anymore,” said Holden, “Those are people I love, that I worked with everyday and when they struggle, when they are in pain, and when they die it’s just too real for me.”

Holden spoke at great lengths about her relationship with Frank Darabont, who developed The Walking Dead and worked with Holden on The Majestic and The Mist. “[When he left the show] we all just sobbed,” said Holden. “None of us knew why and none of us understood it, but it is a true testament to how great of a leader he was that the show continued.”

The best question from the Q and A portion came from a young woman with Down’s Syndrome, who didn’t say her name. “What decisions did you agree or disagree with Andrea on?” she asked. The panel’s top-notch moderator, Sean Smithson of Fangoria and twitchfilm.com, praised the question as Holden thought on it. “The thing I didn’t understand was why Andrea would stay with that awful man,” Halden said, of course referencing David Morrissey’s Governor character (who Holden said was one of the warmest people in the cast). “In the end, it was about the people of Maybury and not because she was staying for him, but I don’t think the show portrayed that well enough.”

Holden closed by saying how much she loves coming to Salt Lake City. “I came here last year, and I was introduced to this amazing group and now I’m back and it’s almost like a homecoming,” she said, obviously trying to mask a lot of emotion. “The people here have such good hearts. I love you, Utah.” We love you too Andrea … err … Laurie.

Check out our photo gallery for more photos from Fan Xperience 2015!