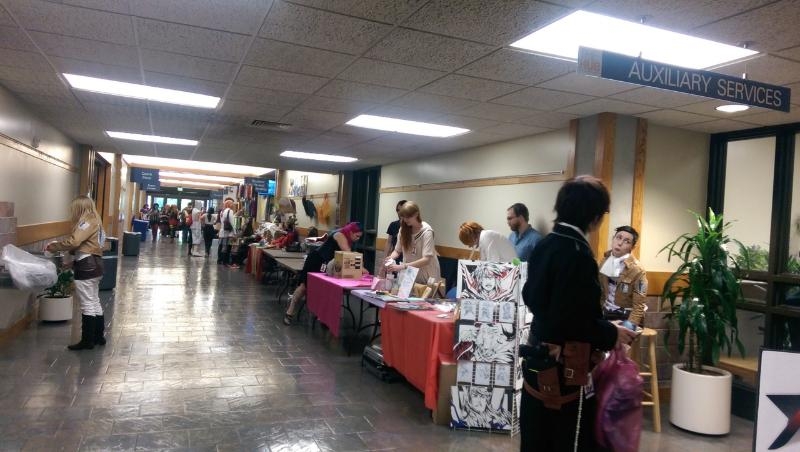 The second annual Anime Salt Lake gets a slow start Friday. Photo: Rebecca Frost
Last year when I attended Anime Salt Lake, I was there to record a live episode of my podcast. We arrived towards the end of the festivities on the first day and Salt Lake Community College’s Redwood campus was still bustling. The second floor was filled with people in cosplay running around, being loud and talking about things I didn’t (and still don’t) understand. We started recording and had to pause a few times due to the noise level of all the teens in the hall. At one point, everyone took time to participate in a Harlem Shake video, so 2013. We actually had a good time, considering most of the people in attendance were younger than 18 and dressed in costumes I didn’t recognize and speaking about things I couldn’t understand. The vendor room was full with artists and vendors selling definitely anime-related things that I wasn’t interested in, but as a person of geek persuasion I could appreciate that there is a market for all these weird toys with eyes and ears. I was only slightly overwhelmed, and it only the first day of the convention. I could only imagine what Saturday would look like.This year, however, was a totally different convention. I am a working girl, so I was able to finally arrive to Anime Salt Lake after 7:30 p.m. Anime Salt Lake’s website posted their floor hours as 10 AM to 10 PM so I figured I still had time to see what this year had to offer. I pulled up to the Salt Lake Community College Redwood campus and found the parking lot seemed to be mostly empty. The campus is huge with parking galore so for me to preemptively judge the turn out based on this one parking lot was a little unfair. I walked up to the building, passing a couple of girls in cosplay doing an impromptu photo shoot and another couple of girls in purple wigs and pink dresses smoking. I had a brief flash of the confusion children must feel when they see Mickey Mouse at Disneyland without his head on and instead a bearded man in an oversized mouse suit. I continued in, fumbled a bit trying to retrieve my press badge (which, by the way, needed a spell check), and began to walk around.The floor was…empty? Not nearly as many people as I remembered seeing the year before. I moved down the corridor deemed Artist Alley and most of the artists had begun to pack up. It was only 7:45 p.m. and everyone seemed ready to go home. Further down Artist Alley there was an entrance to the Vendor room according to the map pamphlet I received when I checked in. I was confused because the door seemed to be locked. Two boys were asking about the room but the woman standing in front of it bared the posture and tone that suggested the room was no longer available for us to see. Oh. Well. Alright then. Later, upon further inspection of the program, I realized that the Vendor room was being used for panels (correction: panel. One panel on Friday) and would be open to vendors and dealers on Saturday.I moved back across the entryway and into the other room available on the first floor, where most panels seemed to have been held during the day. The room was semi-full, watching a group of guys sitting around a table. It didn’t seem exciting upon first arrival. The room was quiet, no one was hosting a conversation. Was this a panel where a group of people played a game and the audience just watched? If so, this was a slow moving game that I maybe didn’t know about. I looked at my program and saw this was supposed to be the “Batsu Games” panel. Batsu games are most recognized as those wacky Japanese game shows, in which after a competition or a bet the loser is subjected to something awful. In the instance I saw, the losers had to take a shot of hot sauce. I missed what the challenge was and didn’t quite understand how the losers came to this unfortunate fate. I did, however, witness some near-vomit-experiences and people leaning over a trashcan. At points, instead of clapping, the audience was led in beatnik slam poetry clapping. A wave of snapping fingers like these kids who just took shots of hot sauce had performed moving, personal poetry.

I had to see what the second floor looked like. All I had seen so far were half-attempted costumes and bored looking bike policemen. I went upstairs and the scene was similar to the one downstairs. Only a few costumed kids wandering around, artists packing up their booths and not much else. There was a Brony (dudes who just absolutely love My Little Pony) panel happening in the area of the map deemed the Video Game Room, and ain’t no way I’m walking into a Brony panel. In the Viewing Room was an AMV contest. A room half full of people watching music videos set to different anime shows. No one held papers or ballots to vote, so I can really only assume it was a fun time for people who created these videos to sit, share, and watch all of the submissions. Of everything I saw (or didn’t see, really) this was probably the coolest. The videos were well done and comical.

I left the viewing room and went to the ladies room. If there was one thing I missed the most from last year, it was sitting in the ladies room listening to two teen girls talking about boys and anime things all in one go. Alas, the room was quiet and empty. This day officially sucked. I get that I showed up a little late to the party. If the convention hours go from 10 a.m. to 10 p.m., why not utilize the hours to their fullest? Some teens and most adults have jobs and can’t spend daytime hours at an anime convention. Anime Salt Lake is put on by Salt Lake Community College and it gave me the impression that the Anime Club was granted a weekend to demonstrate what they are all about. It felt lazy. Like they had expended all their energy into last year’s gathering and were still recovering.

I sat outside and quietly fumed. This was underwhelming and I was disappointed. The program boasts a list of panels and events that sounded cool, but towards the end of the day the coolness levels lowered and left those of us who couldn’t attend earlier in the day with not much to do. I don’t even like anime and I was envious of my friends who would attend Saturday. Hopefully next year the group behind Anime Salt Lake will have recovered enough from the awesomeness of 2013 to really make 2015 count.