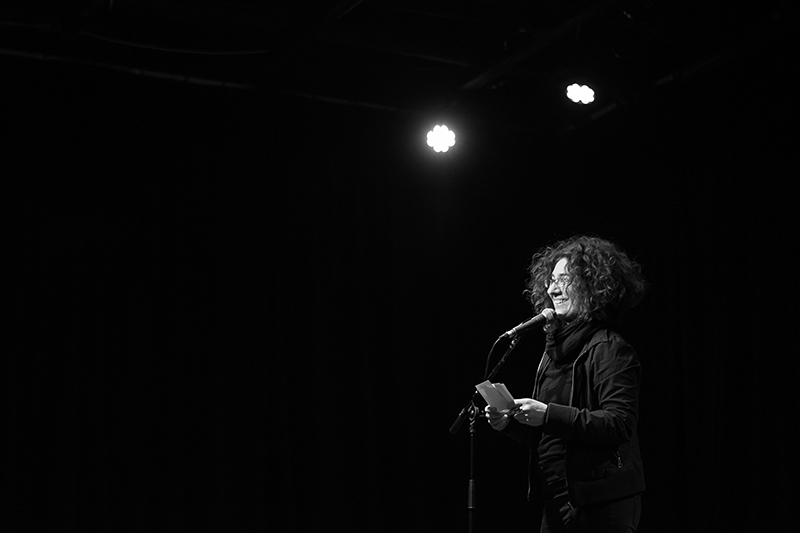 The Bee: True Stories From the Hive

“Storytelling is something that’s a part of culture. It’s a part of us that goes all the way back to the beginning and belongs to everyone,” says Giuliana Serena, “beekeeper” and founder of The Bee. The Bee is a story slam that has joined storytellers together for workshops, curated shows and “lovingly” competitive storytelling since 2014. For every month during 2018, The Bee has hosted shows at Metro Music Hall, allowing 10 storytellers to share a true, personal story for five minutes each, without notes, in front of an audience and based on the theme of the night. It’s an intimidating prospect for both new and seasoned storytellers. Although, for Serena, being in the audience can be equally participatory. The audience is asked to listen attentively to what the storyteller has to say and try to understand their experience as part of a greater, collective, human experience. Though guest judges score the stories based on their adherence to the theme, truthfulness, compliance with the time constraints and the overall effectiveness of the story, For Serena, the real reward comes from the story being shared. “There’s no prize,” she says. “We like to say that you have the satisfaction of having told a pretty great story to a crowd. That what it’s about: stories and people experiencing [those stories] together.”

The Bee is a consistently well-attended event, with tickets for each show often selling out soon after they’re available. For Serena, the popularity and draw of The Bee hearkens back to oral tradition’s relationship to humanity—bringing people together in a way that is becoming increasingly rare in an age defined by social media and technology. “One of the things that’s special about [The Bee] is that people are showing up with this shared intention, especially in the world where so much of our contact with other people is mitigated by devices and screens,” she says. “This can increase the potency of showing up in the flesh—human bodies together, having a moment together that we’re co-creating.” The Bee keeps an archive of their past stories on their website, which Serena highly suggests listening to, though she says the archived recordings cannot replace the real event. “It’s not the same as being in the room when it’s happening. I think that’s one of the reasons people want to be there. It’s one way of countering the vast reservoir of isolation and sadness so many of us experience. It feels that good to be around people sometimes.”

While the act of being vulnerable and genuine through telling a personal story onstage can seem daunting, Serena promises an experience where the audience is on the side of the storyteller. “We have a strong emphasis on showing up for each other … We’re pulling

for you onstage,” she says. “We think it’s really important to celebrate the bravery of taking this opportunity to be honest and have a moment of actual connection with the audience.” The 10 storytellers on any given night are picked at random, and the resulting stories can be unexpected, can challenge your worldview, or completely surpass your expectations. None of the stories are censored, though anything bordering on hate speech or bigotry is not welcome. Anyone can submit their name to be considered for an opportunity to tell a story onstage at The Bee’s website prior to the show. Newcomers get two submissions into the “hat,” doubling the chances of being called onstage. For Serena, the balance between newcomers and returning storytellers—though left to chance—has usually balanced itself out. She especially welcomes those who have never attended a show before to tell their story. “We’re stoked on new storytellers,” says Serena “We’re stoked on all storytellers.”

In addition to the storytelling shows, The Bee also provides workshops called Storytelling for Adults. In these workshops, participants can flesh out their ideas for stories using different prompts and exercises in a small group setting that is more collaborative and less competitive than the shows. “It’s pretty high-stakes for most folks to go onstage and tell a story in front of people. Working on the practices of articulating what’s going on inside of us and being able to [do so] in a more low-key setting is what the workshops are for,” says Serena, who hopes to help storytellers recognize the stories they have from their own personal experiences. “When you’re preparing to tell a story, even if you don’t get onstage, you learn something in the process in preparing it. Knowing what your story is about can be a really valuable thing. I don’t believe you can know what your stories are really about until you start telling them.”

With more monthly shows at Metro Music Hall to come, there will also be a curated show at Kingsbury Hall in conjunction with UtahPresents and the University of Utah Resiliency Center and Program for Medical Ethics and Humanities on Jan. 19. The theme is healthcare: stories of illness and wellness. There will be seven speakers ranging from patients with chronic illnesses or acute injuries to healthcare providers, and stories for this event will be 8–10 minutes long instead of the usual five. Tickets for this event are $20 for the public and $5 for University of Utah students. More information about this show and other upcoming shows for The Bee can be found on their website at thebeeslc.org.