Partners Matt Aller, Chris Barlow and Erik Ostling, who have worked in Salt Lake’s design, advertising and photography industries, officially started producing at Beehive Distilling in January of this year and their visual skills show on both the bottle’s great label design and their promotional materials. The precious liquid inside the bottle, though, outshines its appearances—Jack Rabbit Gin is some fine-tasting liquor. 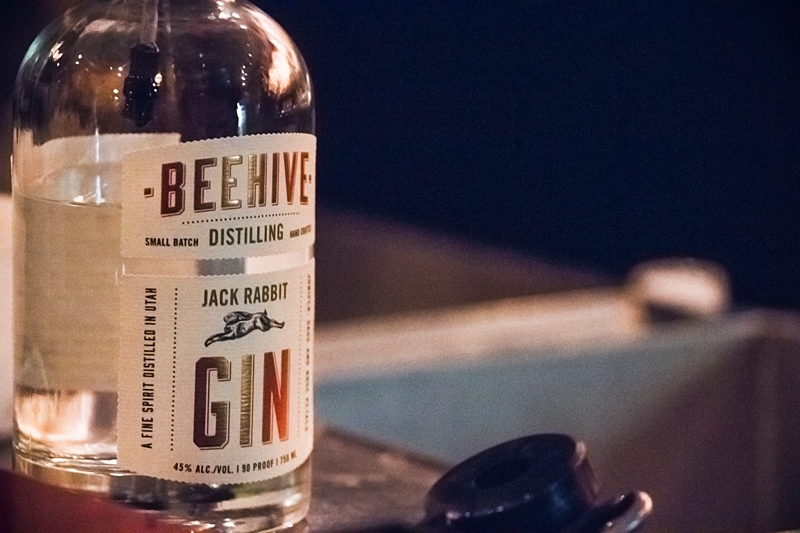 Aside from coffee and the written word, both of which I produce professionally and obsess over recreationally, my only real hobby is drinking booze. No, not by the plastic jug on the bottom shelf of the State Liquor Store—I’m a mid-shelf kind of guy. My girlfriend nods politely when I interrupt her reading to ramble on about the next set of glasses or bottle of rye I think I want to buy, and I have two shelves in my refrigerator designated as beer and vermouth–only. This may be why I was assigned to cover the official unveiling of Utah’s newest—and only—locally produced gin, called Jack Rabbit.

Partners Matt Aller, Chris Barlow and Erik Ostling, who have worked in Salt Lake’s design, advertising and photography industries, officially started producing at Beehive Distilling in January of this year and their visual skills show on both the bottle’s great label design and their promotional materials. The precious liquid inside the bottle, though, outshines its appearances—Jack Rabbit Gin is some fine-tasting liquor. Beehive sources a corn-based neutral spirit and re-distills it with textbook gin botanicals including rose, lemon peel, coriander and, of course, juniper. Their motto of sorts is “Juniper is King,” and it shows. Jack Rabbit holds its own next to other juniper-forward commercial gins such as Tanqueray or Beefeater, but the heavy rose and sage additions and overall concentration of flavor make it a much tastier spirit than most gins I can recall.

Though Jack Rabbit Gin has been available in liquor stores for a few months, the party on August 2 was kind of a grand opening, with a VIP pre-party starting at 6 p.m. and the regular people party starting at 8 p.m. Set to entertain were Charles Ellsworth & The Blue Bourbon Orchestra, Vincent Draper & The Dirty Thirty, and Six Feet In The Pine, and Off Premise Catering provided food for the VIPs. The featured drinks were the martini, the negroni and the gin fizz—three classic gin cocktails that showcased Jack Rabbit and adequately lubricated the crowd. Here are my notes from the event:

Really rose-heavy with a splash of water added.

Negroni: Gin stands out as much as Campari, cuts bitterness perfectly. The gin’s sweetness really stands out, too.

6:56 p.m.
Everyone is vacuuming up the apps. Food guy descending, backward, beneath the curtain on stage. Most people didn’t realize there was food at first and just crowded in The State Room lobby. I “snuck” back here at 6 but turned back with fear.

7:15 p.m.
I’m feeling kind of drunk. The first gin, neat, made me relax but this negroni is sneaking up on me. I forget they’re all booze.

I’m watching a guy’s RED camera for him while he gets a drink. For some reason I told him I’d stab anyone who touched it. Why would I say that? I have to pee but I can’t betray the camera guy.

7:22 p.m.
Camera guy came back. He said I did a wonderful job. The food situation is looking hostile. Thirty seconds after the food guy replenishes the olive tapenade bruschetta things, they’re gone. I think he’s stressed. My friend Frankie just sat down with a giant plate of food. The plate isn’t giant, the food pile is. He keeps talking about the food. He grabbed enough food for his girlfriend, Monica, but he’s going to eat it all. He’s very stoned and claims he had two unspecified gin cocktails before arriving, plus two freebies. Oh yeah, VIPs got two free drinks. Frankie, who paid $70 total for Monica and him to get in, says, “I’m trying to figure out how much I need to eat and drink to get my money’s worth.” He pulls out his phone and starts doing some calculations. He shows me a figure: 2,846. “Everyone is having such a good time,” he says. Frankie just told me he had three Beehive Distillery martinis before he came. “It’s a body drunk.”

I got a martini. I asked the bartender to please stir mine instead of shaking it like crazy. That might have been a dick move. I can’t taste the gin—it just tastes like olive juice and a little bit of dry vermouth. Whatever, it’s the only thing I’ve paid for thus far and I already know the gin is amazing. I’ll make my own martini at home when I pick up a bottle. Monica spilled her entire martini on Skylar Nielson.

8:26 p.m.
I couldn’t finish my martini. I ate the olive and gave it to Frankie. There are several spent plastic martini glasses on the floor under our pews. Passers by have to step over them. Monica keeps saying that this place is really a church. A band is setting up.

8:36 p.m.
Six Feet In The Pine is playing. Barefoot, mustached fiddle player. Bowler hat. “Americana.” Bluegrassy, makes me want to drink shitty moonshine. Monica drunk-whispers in my ear, “Folk yeah.” Now, a song for the drinkers. “It’s about the Marmons,” they say. Monica is at the edge of her seat, watching intently. “I just fell asleep for a second,” she says.

Jac and Chad are here now. Jac doesn’t drink—I wonder how much free Coke he has to drink to get his $ worth.

The banjo player/singer just said “She’s a skanky little bitch” in reference to someone in the song. That was weird.

This song is structurally identical to “Stairway to Heaven.” It even sounds like it but bluegrass.

SLUG photographer Talyn Sherer gave me a mechanical pencil but there is no lead/graphite in it.

9:49 p.m.
Chris, one of the Beehive owners, bought me a negroni. Then he bought Alex Ortega, Sam Hanson and Chad a negroni. No, Chad got gin fizz. Just walked into the stage area. Vincent Draper and Genevieve Smith are playing. Too serious. Back to the lobby. They were beautiful, but I couldn’t sit still.

10:24 p.m.
Too real, too poignant. Charles Ellsworth solo, talking about the past. I’m depressed. Then Genevieve joins with “Move On” and maybe it’s all the free gin but I feel too sad to appreciate its beauty. The really low cello notes make it better, though. Now my Sharpie notes are getting crooked and bleeding together and I think I should quit while I’m ahead.

Needless to say, I enjoyed the drinks, the food, the music and the company. The night was abuzz with excitement about Beehive Distilling and appreciation for Salt Lake City’s energetic cultural upswing. Visit beehivedistilling.com for a list of establishments that carry Jack Rabbit, or pick up a bottle at your local state institution for a modest $27.99. Now, if you’ll excuse me, I’m going to stir up another Beehive martini—no olive juice this time.

Check out more photos from the event here.