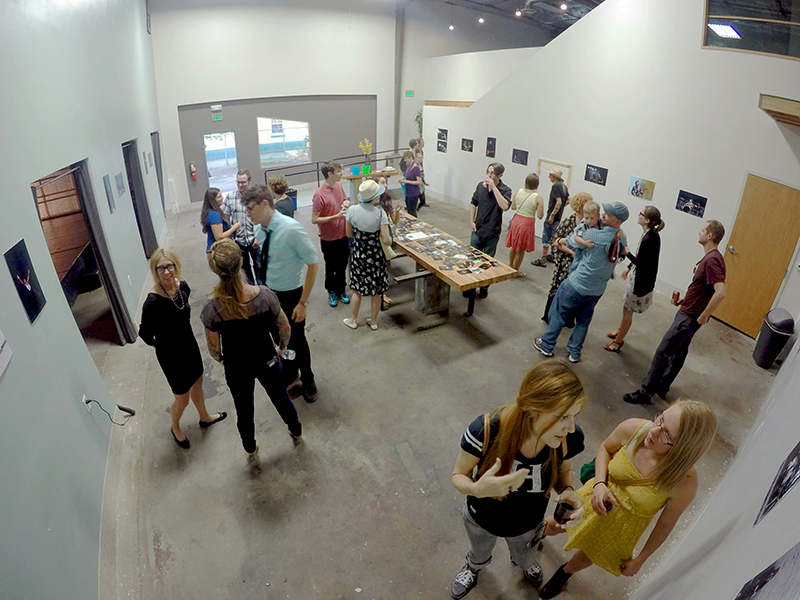 For the opening reception of Captured Locally, a thick wooden table in the center of the room housed a sprawling spread of dozens of Sorenson’s photographic prints in 4”x 6” format. Throughout the evening, bits of dusk, sun and conversation filled the gallery, and in the adjacent black box theater came live local music: Wing & Claw, and then Vincent Draper (with Genevieve Smith) performed, melding their warm and earnest folk tunes with the gallery chatter. Sorenson would occasionally step aside to quickly snap an additional few shots of these musicians, mid-performance.

Captured Locally is split into three series, dispersed evenly across three walls, each of which brings a unique focus and strength to the exhibition: There’s dance, which captures dancers mid-pose, -performance and -air; music, which comprises a variety of musicians onstage, many with their eyes closed; and street, a black-and-white, mostly candid series of Salt Lake strangers and their day-to-day.

In dance, Logan Sorenson is most successful in seizing the art form at its most iconic, with dynamic and immense movements that are as physical as they are emotional. Sorensen captures dancers at the highest of their leaps, the fullest of their extensions, the most dramatic of their poses. In one particular photograph, we trace the startling curves of a dancer in an exquisite backbend, her long hair and skirt billowing. In another, a dancer is in that brief moment just after the height of his leap, arms and legs outstretched, torso twisted to face the camera, mouth agape and fingers extended. In the left corner, we can faintly see a few members of the audience looking on with expressions of joy and wonder.

As for the music series, Sorenson has also captured artists in the midst of their performance and craft. There’s more of a peacefulness, however; the focal point is moved away from the edges—the limbs, the instruments, the lights—and instead lingers of the faces of the musicians as they play or sing. The pieces are less theatrical than are the dance photographs, but they’re no less riveting. There’s more of a meditative, even trancelike quality to these musicians’ portraits, which makes for a nice complement to the taut physicality we see in the dance photographs.

While the exhibition is certainly cohesive, it’d have been just as compelling (maybe even more so) to portray audience members as it does with the performers, though that could have been an entire other exhibition. The dancers and musicians, onstage and under the spotlight, are eye-catching and engaging, but there’s a bit of a performer/audience disconnect throughout. That gap, however, is bridged in Sorenson’s street series, which stands out from the rest. Here, we see Sorenson’s scene and mood setting at its best. The photographs are black and white, with more contrast and exposure. They’re busier, too, meaning that the objects and scenes around Sorenson’s street subjects are just as important as the people themselves. Someone crouches next to his bicycle. A man looks down at his laptop while a woman at another table behind him chats with her companion. In the only non candid shot, a man looks up to the camera through his sunglasses, and we notice his tattoos immediately, which draw our eyes away from his face and throughout the rest of the photograph. In Captured Locally, Sorenson’s photographic style is diligent and lively as he captures dance, music and street, and he’s put together an impressive and energetic exhibition that is not only tied together by the physical locale of where the photos were taken, but also by its celebration of people.

Captured Locally will be on exhibition at the Sugar Space Arts Warehouse until Sept. 16. To view more work by Logan Sorenson, visit his website at lmsorenson.net.