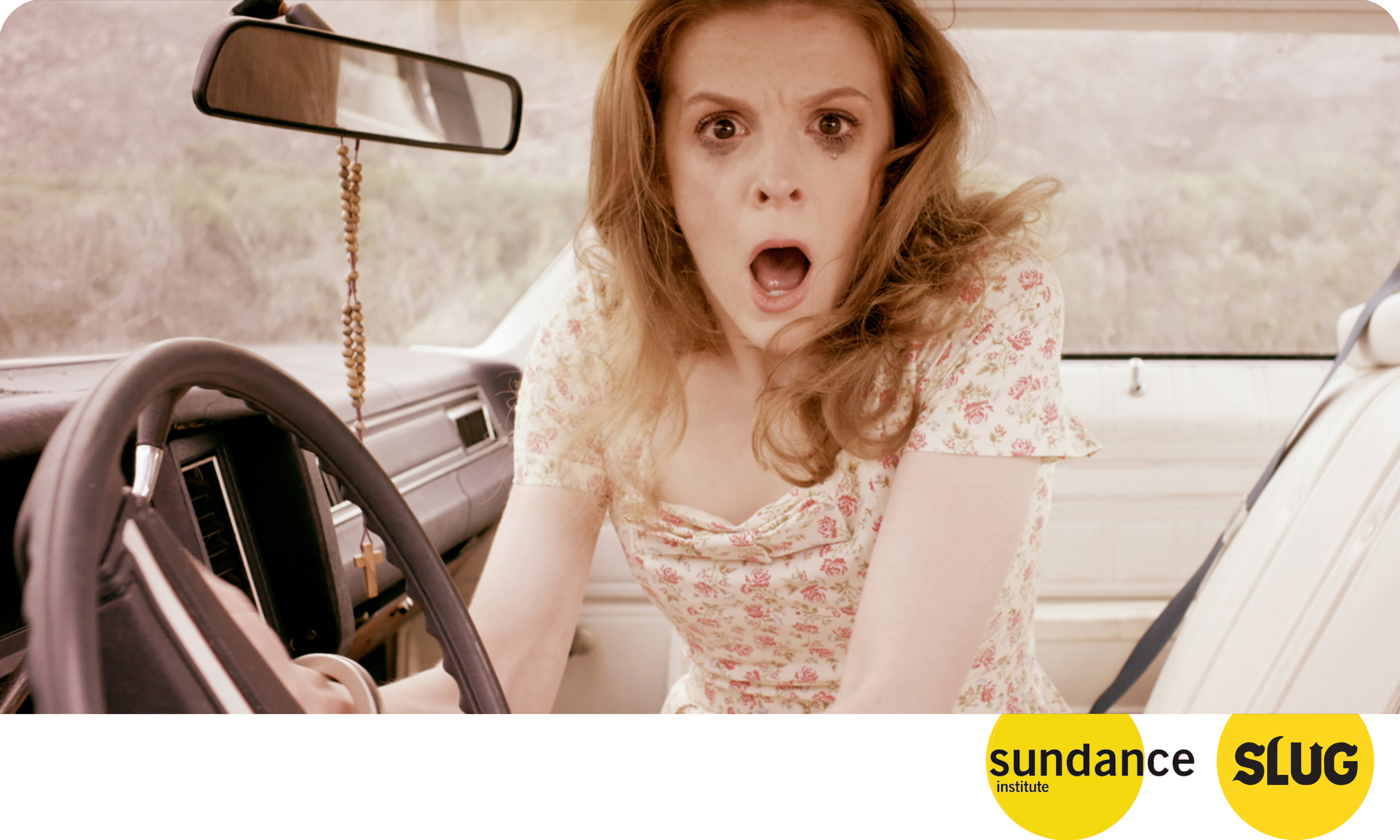 Writer/director Mickey Keating has tried his hand at many different horror subgenres, including sci-fi body horror with Pod and slow descents into madness with Darling. Carnage Park demonstrates his knack for imagining uniquely terrifying scenarios and then inflicting them upon his characters.

The film opens with two high-octane scenes—one involving a badly beaten man wandering through the desert only to be shot for afar by a high-caliber rifle, and the second depicts two crooks on the run from a botched bank robbery. There’s an obvious nod to Quentin Tarantino’s Reservoir Dogs as Scorpion Joe (James Landry Hébert) clutches the hand of his partner Lenny (George Villar) as he bleeds out in the back seat of their getaway vehicle. It’s a clever way to open a film that frequently references Tarantino’s grindhouse style, almost like a parenthetical citation during Keating’s own thesis on back country violence.

As intense as these opening scenes are, Carnage Park doesn’t officially begin until Joe reveals that he and Lenny have taken a spitfire named Vivian (Ashley Bell) as a hostage. When Joe schemes to take Vivian with him to Mexico, a gunshot blows out one of the vehicles tires and we soon realize that Joe and Vivian are being hunted by an ex-military sniper named Wyatt Moss (Pat Healy), a man who takes trespassing a bit too seriously. Casting a sniper as the antagonist is a fascinating decision. I’m used to my horror villains stalking their prey with knives or hatchets, seeking to get personal with their victims before dispatching them. Moss doesn’t have this type of fixation, which makes his motivations all the more terrifying. He sees the trespassers as pests that need to be exterminated and nothing more.

Initially, I was expecting a story that found Joe and Vivian working together to survive a greater threat, but the film is steadily focused on Vivian’s individual fight for survival. Ashley Bell (The Last Exorcism) is a one-woman powerhouse, effectively dominating every scene that she’s in. Even during an expository flashback, we can easily see that she’s a person who doesn’t respond well to being backed into a corner. The bulk of the film follows her attempts to safely navigate Moss’ booby-trapped stretch of desolate land, and it’s Bell’s performance that solidifies the entire story.

The actual landscape of Carnage Park is also impressive—everything appears to be filmed with a rust-colored lens, and the stark nothingness of Moss’ playground of murder communicates a deep sense of isolation. It’s a handy element, since it both draws us into Vivian’s struggle while showing us exactly why Moss is such a psycho. The physical landscape is populated with rusty deathtraps, as is Moss’s own twisted mind.

While Carnage Park is a solid film that delivers some solid scares and stays faithfully authentic to its 1970s setting, it’s not perfect. Despite its 90-minute runtime, it still feels a little bit too long, and the subplot involving the Sheriff’s (Alan Ruck) unwritten understanding of Moss’ predilection for hunting down trespassers seemed like a poorly executed attempt to humanize the antagonist. Keating’s abilities to create a hellish environment and let a talented actress do her job are spot on, but the film could have benefitted from a more fleshed-out script.

Regardless of the film’s flaws, Carnage Park is an excellent entry in the environmental horror subgenre—it feels right at home with movies like Wolf Creek and The Hills Have Eyes. Keating definitely knows how to make a hostile environment come to life, and will be sure to have viewers cautiously peering out of their windshields the next time they drive through some long-forgotten desert highway.