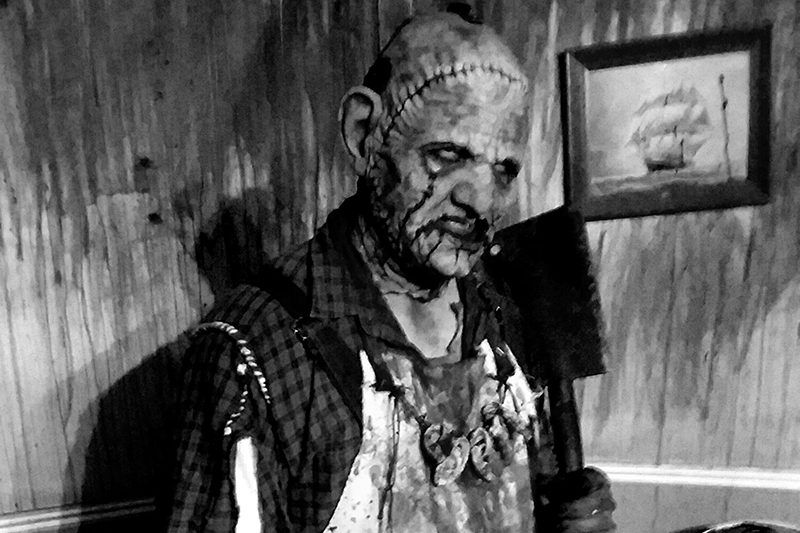 On Thursday, Sept. 26, I had a chance to check out The Castle of Chaos in Midvale. As Halloween is a favorite holiday of mine, I was very excited to attend. Guest were greeted with refreshments and inviting conversations before the walk-through began—and the brave ones were able to embrace a beautiful tarantula and let it crawl all over them. Frankly, this was one scare I was admiring from a distance. The crowd was entertained by various actors as we listened to others prepare for their night. The first thing I noticed about this haunt was the level of organization and professionalism the establishment had. We were guided to a ticket booth and were given a choice about what type of experience we wanted to have. I chose the “level four” scare, as it was the highest offered on this particular evening. I wanted to see what this “touch experience” was all about. When everyone had chosen their fate, the tour began.

Upon entrance, the first thing I noticed was the familiar scent of haunted houses. I suppose it is a cross between latex, fog machine and dust—a scent I find very comforting. This was my first realization that the season of scare was upon me. I headed down the ramp and into the darkness I went.

The first creature that stood out to me was large, and looked like something The Umbrella Corporation created in the Resident Evil series. I kept my eye on this creature, as every time I turned my back it seemed to step closer. I found myself even walking backwards to make sure it did not move. I turned the corner and noticed that the room kept getting smaller and smaller until I found that the only way out was to get on my hands and knees and crawl through a small tunnel. Luckily, I made it through without getting stuck. I contemplated what avenue a larger person would have to take, and hoping their experience would be as good as the one I was having.

“I was impressed by the length of time these actors spent with me and that every moment of it was in character.”

I am unsure of what order I encountered the beings in this Castle of Chaos because as things began happening to me, I just let them. I wanted to see how the experience played out and how well the actors played their roles. I was not disappointed in any way.

At one point, I encountered a butcher. This character reminded me of Leatherface from The Texas Chainsaw Massacre movie. I was held back as my group went on and ordered to get upon a table where an impressive role played out. I was told how my face was going to be taken off and my body dissected in graphic detail. Next thing I know, something that felt like body organs were placed on my face—intestines to be exact. These felt long as they just kept getting piled on. It was relentless, and it felt as if it were never going to end. Then it seemed that something like a liver or stomach was added to the mix. These props were wet, and due to their texture, had a bit of slippery feeling to them. I had no idea what this wet substance was and envisioned walking out of the haunt with fake blood all over me. I could not help but squirm on this table and was filled with disgust. I found it fascinating to experience this emotion. After a few more moments of great acting, I was helped off the table and was sent on my way to encounter the other characters this building had in store for me.

A bag was placed over my head and I was taken away from the group. I think the first time this happened it was a doctor. I was put in an area and my head became wet. I thought this was a very interesting effect because I had no idea what was being poured upon my head as it seeped through the bag. After some choice words from the doctor, the bag was taken off and I was released.

“This haunt was perfect chaos, very detail-oriented and I will be going back for another visit.”

It seems most haunted houses have some type of maze in them, and usually I can find my way through them with ease. Castle Chaos had me. I wandered around through the dark pathways for 8–10 minutes, always turning up at the entrance of the maze.  After a few more wrong turns, I was escorted to its exit of by an eerie guide. These fun houses always have a way of distorting your views, and this one certainly had me feeling out of sorts. Clowns were everywhere and I was grabbed, another bag placed on my head and spun in circles to the point where I did not know which way I came from. I was let go and started regaining my composure with clown faces popping in and out of view. It was a stimulating whirlwind of eye, sound and balance sensations.

I walked through a few more rooms only to find myself being spun again. When I was released, I was placed into a casket and the lid closed. The dizziness began to fade and after a few minutes and some terrifying pounding, the coffin was opened by a female being that was very into playing her role. She stood over me as I laid in this confined space with her face just inches away from mine. I could not help but realize how much detail was put into her make-up. The actress kept playing her character until she felt it was time for me to be released. I was helped out of the casket and sent on my way.

I was impressed by the length of time these actors spent with me and that every moment of it was in character. I was ecstatic that there were many rooms to this haunt and only a few of them were empty. This haunt was perfect chaos, very detail-oriented and I will be going back for another visit. Only this time I will step it up to see what  the exclusive “level five” experience has to offer. If you find yourself upon a moment and want to attempt these horrors, head on down to Castle of Chaos . I do caution though, The Castle of Chaos it is not for the faint of heart—even the experienced receive a scare or two.

Real Haunted Houses: Local Ghost Stories
A Haunting of the Living and the Dead: Asylum 49