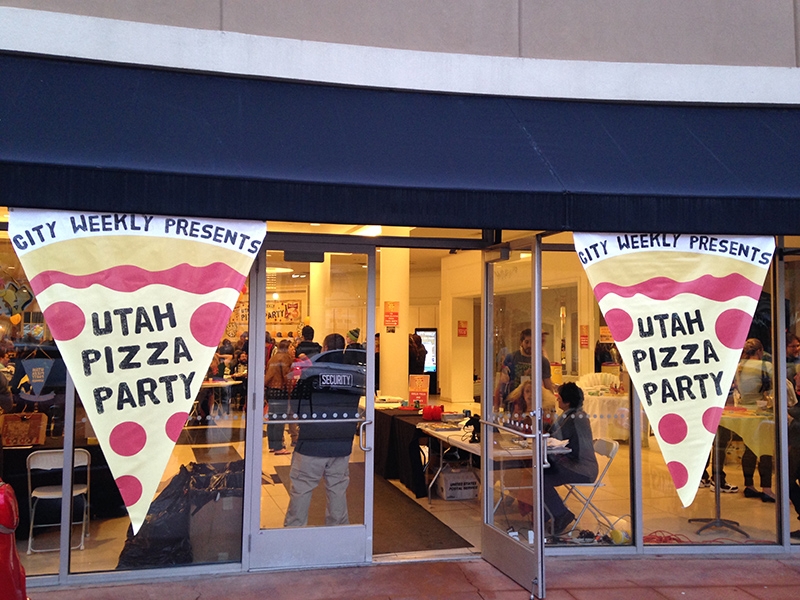 Like a vigilant night watchman, pizza was there when you and your friends wrote the very last line of code for your very first video game, or when you needed comfort after some asshole took an emotional shotgun to your heart. Pizza has been the unsung companion to all of our victories and defeats over the years, and thanks to City Weekly’s First Annual Pizza Party, the noble pizza pie was properly celebrated. The sold-out event featured 12 local pizzerias divvying out three to four of their trademark pies, which meant that attendees had unlimited access to nearly 50 different pizza options. The event also featured locally crafted beer from Bohemian Brewery, as well as other tasty liquid libations that served to complement the main course.

When I approach the evaluation of pizza, I have two categories. The first is the kind of pizza that you want when you’re in need of some hot and gooey love piled high with meats and veggies. It’s thick, unapologetically bad for you, and sometimes you have to eat it with a fork—when no one else is around, of course. Here are the pies that did category one proud with their excessive deliciousness.

I’m a firm believer that nothing is forbidden on a pizza, and I love that Salt Lake Pizza & Pasta shares my open mindedness. Not only was the pulled pork succulent and flavorful on its own, but it was topped with small slivers of pineapple and a barbecue sauce that spiked the whole flavor profile with hints of smoke and cinnamon. While nuance is not a characteristic that pizza typically offers, this pie tasted like it was assembled with a culinary gameplan.

This one caught my eye with its sheer volume. Big chunks of chicken, thick slices of yellow pepper and juicy pineapple medallions stacked on top of the tastiest crust of the evening. The sweet pop of pineapple paired well with the vinegar of the pickled yellow peppers, and that crust! Usually, wheat crust is an embarrassment for all parties involved, but Mellow Mushroom has managed to create a wheat crust that had the right balance of chewy and crispy.

I used to be very skeptical about vegan pizza. As I’ve matured, however, I have come to the happy understanding that, with a skilled hand, vegan pizza is just as satisfying as its non-vegan brethren. Sage’s lineup offered a few creative vegan takes on pizza, but their most successful was the Walnut Pesto. Their pesto had the right amount of herbaceous basil, and the walnuts added an extra level of earthiness to every bite.

Pizzas in the second category are a bit more top shelf and elegant, and are often considered to be more authentically Italian than those in the first category. It typically comes served quite thin with a bit of char on the crust from a wood-burning pizza oven as thickly sliced mozzarella melts lazily into a sauce of crushed tomatoes. There weren’t a whole lot of vendors cranking out this type of pie, but those who were sure knew what they were doing.

The Place: Vinto
The Pie: Patate

Potatoes have quickly become one of my favorite pizza toppings. Vinto slices up some beautiful Yukon Gold potatoes and lets the cooking process turn them into crispy discs of goodness. The rosemary, goat cheese and fresh arugula bring the classic baked-potato flavors to a whole new level. Vinto’s traditional Italian crust is an excellent delivery system for the toppings, as it’s thin and properly chewy without being flimsy.

The dark horse of the evening, Oak Wood Fire Kitchen, came out of left field with a surprisingly authentic selection of traditional Italian pizza. The Mushroom and Goat Cheese stood out to me because if its simplicity. Creamy goat cheese and roasted mushrooms make an excellent combination, and their crisp, wood-fired crust was excellent.

As it was the first incarnation of what I hope will be an annual occurrence, it was not without its pitfalls. Many vendors were serving cold pizza about an hour into the event, and I found myself missing some of Utah’s pizza staples like The Pie and Este. That being said, it was great to have an excuse to socialize with Utahns without feeling ashamed of piling a plate absurdly high with pizza.