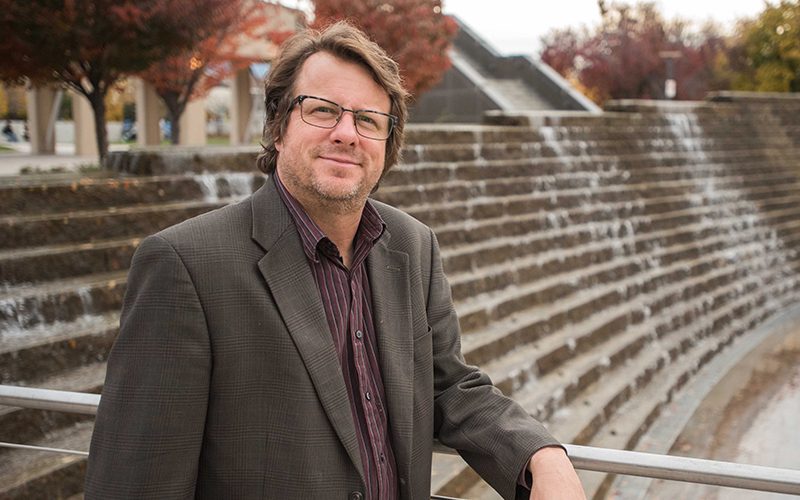 On the first three Wednesday evenings of the academic calendar, in a quiet room in the beautiful Downtown Salt Lake City Public Library, Joel Long and a handful of passionate volunteers host the CITYART Reading Series. Poetry and prose, fiction and nonfiction, even music and experimental forms—CITYART brings talented authors of local and international renown to the Utah public. The events are always free of charge.

There are many remarkable literary figures living among us right here in Utah—many of whom teach at local universities. But often, says Long, “[Their] university doesn’t provide the venue for them to read: They bring in other writers—visiting writers—instead.” The CITYART Reading Series strives to provide that same opportunity to our worthy local authors. “I think that’s invaluable to the community in general,” says Long, “[that] the series allows for those voices to be heard.” Among past readers are Melanie Rae Thon, Poets Laureate of Utah Paisley Rekdal and Katherine Coles, and many other venerable Utah voices. Each year, along with showcasing local talent, CITYART also offers readings from nationally and world-renowned literary figures such as Tony Hoagland, Donald Revell and Poet Laureate of the United States Mark Strand (twice!).

Long, an English teacher at Rowland Hall, has volunteered his time as President of CITYART since 2002. “I came here for an MFA in creative writing,” says Long, “and in the very first months that I lived here, I found the CITYART Readings listed in the newspaper, and I went Downtown.” Back then, before it found a home at the City Library, the reading series was run by Sandy Anderson, who founded it in 1989. At the time, it was held above the Great Wall of China restaurant in an empty backroom past the bathrooms and some unfinished apartments—an inauspicious location, perhaps, but Long didn’t see it that way. “I read there for an open mic one night, a long time ago, and in lots of ways, it changed my life,” he says. More than a venue for experiencing literature firsthand, “the series was a way to enter into the literary-arts community to meet some of the writers that are here, to hear their voices and then ultimately add my voice, too.”

But you don’t need to be a card-carrying member of the literati to have a positive and enriching experience at a CITYART reading—far from it. Literature is storytelling, and storytelling is necessarily a communal exercise. “The storytellers that we have in our community,” says Long, “they’re coming in here and helping us understand who we are as a culture. They’re going to put an image in your mind; they’re going to make you think something that you didn’t think before—make you feel something that you probably should’ve felt recently—and then you’re there. And I love that.” The reading series’ longtime fans love it, too.

In 2019, CITYART will be celebrating its 30th anniversary. By far the longest-running reading series in the state, it is organized and operated entirely by volunteers like Long and Michael McLane. “The funding has gone down over the last several years,” Long says. “The fact is there’s just not that much funding out there for the arts.” But CITYART manages to keep its head above water with grants from The Salt Lake City Arts Council and Salt Lake County’s Zoo Arts and Parks Program. Private donations are also accepted. Go to slcityart.org if you want to help! Donating your time is also an option. “The last several years, a lot of the work has been done by me and Michael McLane and various treasures,” says Long. “Lord knows we could use more volunteers.”

The next time you have a Wednesday evening to yourself, consider stopping by the City Library for an evening of literary enrichment. “I’ve never had a dull night in CITYART,” says Long, “and I’ve been doing it for 17 years! Every time, it’s different. As soon as that mic turns on and those people get up, there’s always something amazing that happens. You’ll hear wonderful poets—sometimes they’re funny; sometimes they’re poignant; sometimes they’re dark … and you’ll always find something to like. And if you don’t like the first one, the second one’s going to wow you just about every time.”

Kicking off the December readings, Allison Hawthorne Deming recently joined, Rekdal and Coles, on Wednesday, Dec. 5. Klancy de Nevers and Scott Abbott are set to read on Wednesday, Dec. 12. Don’t be discouraged if you don’t recognize these names—you don’t have to know the cook to enjoy the taste of the cake! “For me,” says Long, “when I went to my first poetry reading, it made me a poet. Because I could hear what poetry does. It’s that musical sound that can contain intellectual energy and spiritual energy. And to hear that in a human voice—to hear that live, in that presence is different than reading it on the page. There’s something about that living voice that really matters.”