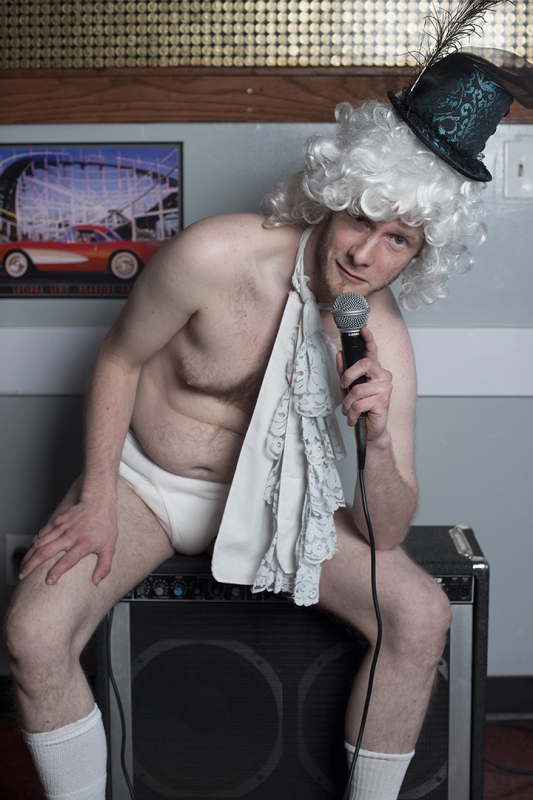 Cosvestite out of the Closet: A Word on Comic Jonny Brandin

After a friend and I CURSED THE HEAVENS for losing the last parking space in the lot by a millisecond, we walked an entire eighth of a block up to the entrance of Mo’s American Diner (1280 S. 300 W.). Passing through the threshold, we faced a packed room of people, one of whom was only wearing his tightie-whities and a powdered wig with a ladies’ mini-top hat pinned at a slant. The only seats that were left to sit down in were front and center, about six feet away from a microphone near the front door. This is something I incidentally hate … Mama said to never sit with your back to people and, by gum, I like to stick to that maxim.But whatever, let’s get to the guy in the underwear. Comic Jonny Brandin may want to consider me for his biographer someday, because I find him to be so. Damn. Fascinating. Hailing from Las Vegas, Brandin got his start performing puppet theater before, during and after local punk shows. That last sentence encapsulates what SLUG and our city’s art scene is all about, so let that soak in for a while. He moved to Salt Lake in 2005, and has been working the comedy circuit ever since. He worships Andy Kaufman, The Kids in the Hall and Upright Citizens Brigade, and likes to humbly remind people he doesn’t embarrass easily.Brandin’s what you’d call a prop comic, but before you start stringing the words “carrot” and “top” together and vomit in your mouth a little when images of a tan, permed redhead with hot-as-shit eyebrows pushing a broom around onstage begin to appear, know that Brandin is a completely different animal. He says, “I consider myself a Cosvestite: It’s like the stunted cousin of a transvestite or nondenominational cos-player. It’s all part of my plan to confuse people into laughing.” His out-of-this-world, awkward comedic timing is something to be relished, and his inscrutably strange one-liners set the tone for some great shows. He opened the underwear set with, “Eating a chick out on her period is a lot like eating a lot of slices of pizza at the same time. It seems like a good idea at the time, but then there’s this red sauce everywhere.”The stand-up scene has been in dire need for a new open-mic venue. The old Mo’s Bar & Grill closed down a few years back, and The Complex’s open-mic show petered out just this past year. When Mo’s was recently resurrected as Mo’s American Diner, Brandin jumped on the opportunity to get a show going again. Thanks to his fine ass and the wonderfully supportive staff of the restaurant, every Tuesday night at 7:30 p.m., you can find local comics sweating over new material, with Brandin at the helm as host in his latest Zurchers regalia. He regularly picks themes and, tonight, it was comics performing in their underwear (LUCKY ME). Not everybody participated, but the brave souls that bared all that was legal get a gyrating hip-thrust from yours truly.

Mo’s is, hands down, the best small venue for stand-up comedy in Salt Lake. It’s an intimate joint that’s reminiscent of a New York Italian diner, with the checkered tablecloths and yellow lighting. It provides a perfect atmosphere for friends to get together and just laugh (with mozzarella sticks, no less!). My only criticism is that there’s no intermission. Yeah, yeah, I know that few open-mics have breaks, but with Mo’s, it’s more of a dining establishment than a bar, and there’s not a lot of moving around to do once you sit down. I guess I feel a little guilty getting up to order a drink or step out for a smoke. With the stage so close to the door, you get the depressing feeling some poor comic is going to notice when you walk away from their set.

Regardless of the lack of potty breaks and the giant wedgie I picked after exiting the pleather chair that I didn’t get out of for almost two hours (pretty sure if Mo’s were a gym, they would’ve been like, “Rip that trick’s membership card to PIECES” for not wiping my ass sweat off the equipment), I realized that Mo’s open-mic was the most fun I’ve had at a comedy show in a long time. I’m not big into open mics because they’re typically about as fun as watching a musician’s band practice: They can fucking suuuuuuckkkkk sometimes. But this open mic is different. Despite all the painful silence, vague racism and alarming Christopher Walken impressions that normally make me squirm within my soul, Brandin’s strong hosting skills and the warm atmosphere at Mo’s make everything feel just right, and this city needs that.

It’d be a disservice to everyone to not tell you that Brandin is one of the most unique and brilliant comics in Salt Lake. I’m relieved that it’s him at the helm of the Mo’s show, and it’d be a shame if you didn’t check out what he’s brewing in the local scene. When asked about future plans, Brandin peers out of his wig and says, “I’d like to tour a lot more. I’d also like to move my comedy in the direction of an avant-garde circus act with stand-up mixed in with it.” Just let me know when and where, pal.