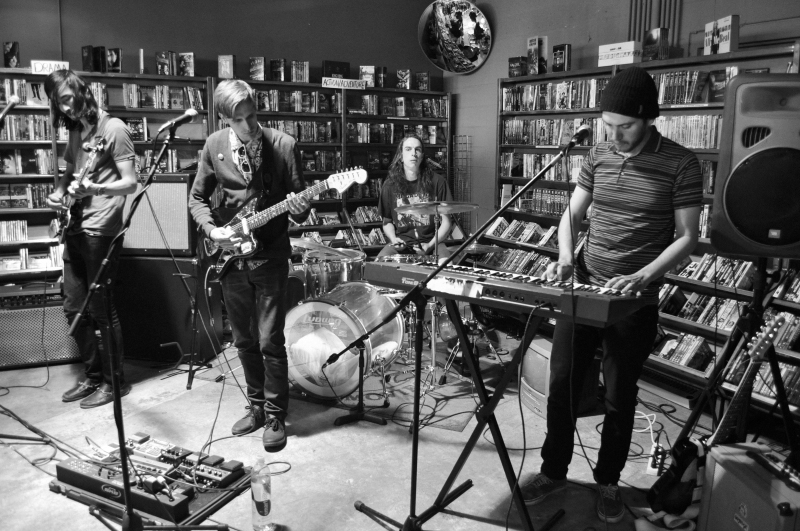 The Create Reel Change organization, created and run by Brian Higgins, held a benefit show to help raise funds in order to maintain their mission of overcoming mental illness through art. Their vision is to inspire, motivate, communicate and connect. Create Reel Change seeks to provide a way to find support through building a sense of community for those afflicted with anything from Post-Traumatic Stress Disorder to Schizophrenia.

Higgins spends a significant amount of time at the Veterans Affairs Medical Center here in Salt Lake City. He runs a workshop there, helping to promote his message of recovery through community and art. He also helps put together film festivals every two months to showcase some of CRC’s members’ work. The next film festival is Oct. 28 at 7 p.m. which will be held at the Salt Lake Film Society’s Tower Theatre on 9th and 9th. Participants will be privy to a variety of local artists’ horror films to commemorate the season of the spooky and demonic.

As Lazy Susan opened up onstage, the angsty quartet broadcasted plenty of emotion. This helped carry them through what was otherwise a simple set, which included a guitar solo that consisted of no more than three notes. On the upside, the band definitely tried their hand at a variety of sounds. They traveled fluidly from a psychedelic intro into a folksy rock n’ roll, jumping into indie pop, and then setting off on a Persian excursion, though they seemed more intent on harnessing the basic structure of a lot of genres as opposed to mastering one.

The lyrics gave oomph to the set, starting off with a girl in a leopard print tank top screaming, “It makes me cry.” As she moved to the drummer’s seat, another singer took to the microphone. Gestating with his hands, he finished a song with, “Is it just me / or is the world crazy. Don’t answer that.” It’s a plea for kindness in a world where the good guys don’t win. Later, the girl in leopard print would decry a lost love: “Bitch, you said forever.” It was an intense set which translated itself through the vocalists more than through the instruments.

After an hour-long setup, 90’s Television took to the stage. It would have been a lot quicker if they had forgone the 50 stuffed animals placed to face the crowd, but then it wouldn’t have been 90’s Television. The vocalist started off playing a mini organ, a first for any of the shows I’ve seen with them, and cooed “Ooh, turn on the radio,” repetitively as he synced the vocals exactly to what he was playing on the keys. After a couple songs, he donned his mono-colored cape and traded positions with the new kid playing guitar. There were five musicians on the stage, two of which were new.

The majority of the set itself seemed less polished than usual, although that might have to do with the fact that the vocals were the least muddied that I’ve heard from these guys or Beachmen. Part of this could be the number of new songs they played, being unfamiliar and what not, which included a number that had the keyboardist, adorned in a bunny hat, belting out nonsensical animal cries. Even though they played far past their allotted time, the second-to-last song they played was the best I’ve heard from these veterans.

While clarity wasn’t the best set up for 90’s Television, it was a great fit for the Beachmen. The vocals were particularly clean, although I think this might have been unintentional. Accustomed to hearing the bassist’s vocals fuzzed out, it was a nice surprise to hear exactly what he was saying—it worked quite well. I’m hoping they continue experimenting with their on stage sound to see how far they can push themselves.

As soon as they started playing a little after midnight, the crowd thickened substantially, which held for the whole set. Even though they started with a three-tiered all instrumental bash, people were really into it, including me. They also played two new songs that don’t even have names yet, which added a little boost to their already powerful catalogue.

All in all the benefit show turned out really well. A substantial amount of people showed up, we got a few laughs from a couple comedians that did a little clip between bands, and the food they cooked up was delicious, even if it was just chicken and rice. If anyone is interested in helping Create Reel Change out, just message Brian Higgins at info@createreelchange.org and he’ll get back to you with all the details of what is coming up.