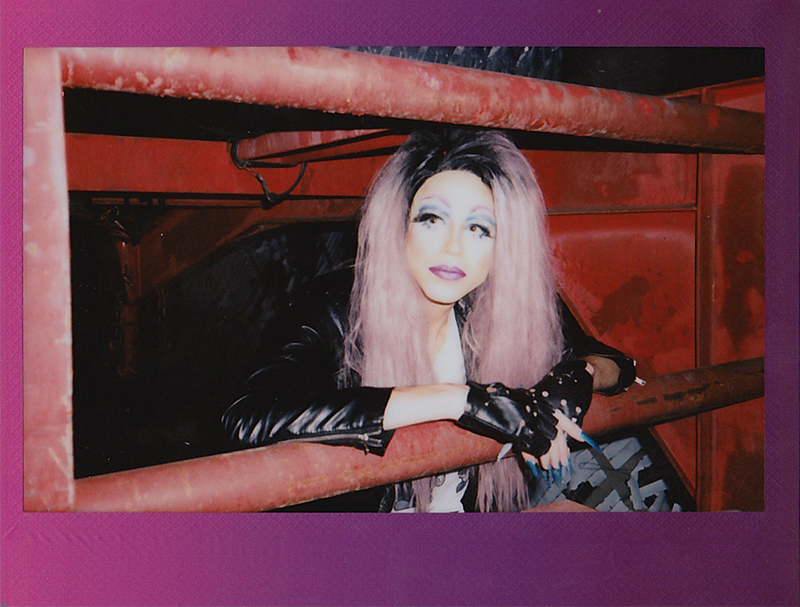 Living in the Salt Lake Valley can be intense sometimes. Whether it’s the cold, the shit air quality or the religious-infused politics of the state, it can take a tough bitch to stand up and stand out. Someone who has been able to survive the strange culture of Utah, while collecting a rainbow-tribe for herself along the way, is the ever poised and polished Gemma Nigh. Pronounced like the astrological sign she was born under, Devin O’Donnell is a local drag queen that has been turning looks and snatching wigs for quite some time. Though only recently has she been performing in drag regularly, musical theater, performance art and an interest in fashion and beauty have taken center stage throughout the majority of her life.

Born and raised in Sandy, Utah, Gemma Nigh got into the realm of performance art while attending Cyprus High School. “Growing up in Utah was definitely interesting. I lived in a super-Mormon neighborhood but never really played with any of the other kids,” she says. Though not truly raised Mormon besides attending church on special occasions, her mother’s family was. At the age of 12 or 13, she was encouraged to be baptized into the LDS faith. After her baptism, she went to church regularly for a year or two before she stopped attending. After the Mormon church’s involvement with Prop 8 became clear, she felt it of great importance to remove her name from LDS records and hasn’t looked back since.

In 2010, Gemma Nigh discovered Rupaul’s Drag Race. Even though she had been to drag shows long before she was old enough to get in, Drag Race made her realize that it was an endeavor that she could pursue. “I realized I could do that! And it was totally in my wheelhouse if I practiced. So I started going at it, practicing in my basement by myself, trying on makeup and watching lots of YouTube.” Since those first years in drag, Gemma has continued expanding her talents onstage and off, while also pursuing an education as a hairstylist. Gemma began attending Taylor Andrews Academy in 2017 once she discovered her love for hair and makeup. She still attends the school in West Jordan, and has already begun styling beautiful wigs for herself as well as other local queens.

Regarding what drew her to that particular career path, she says, “The drag community is super-welcoming, and the beauty community is the same. They just welcome everybody in. I thought I could start making money doing something that I love, and it’s been about a year now… and it’s great. The more I practice it, the more I love it.” To her, drag is all about performance expression. She enjoys portraying a personality that allows her, and others, to have fun. “At first, it was just a way for me to perform. But over time, I started realizing that I was expressing a personality that I don’t usually express. It was about me having fun. I just wanted to go out and party and hoped everyone else enjoyed the time, too.”

Though this fresh-faced queen is 30 years old and has been involved in the drag community of Salt Lake for quite a while now, her drag persona Gemma Nigh is a new one. Before becoming the two-faced character she is today, Gemma was called Melisma Cartier. The name was inspired by two inspirational figures in her life: Gemma’s drag mother Pepper Carter, and Savannah Van Cartier, who styled the wig worn on Gemma’s drag debut. After a time, Gemma felt a detachment from the character she had originally created for herself and felt the urge to kill that drag persona during a live performance. “When Sasha Velour performed in Salt Lake, I was asked to open for her and decided it was time. I had a number where I pulled off layer upon layer of outfits, wigs and wigs, and then at the end, I pulled my whole face off that I had primed with latex before doing my makeup.” That metaphorical death helped Gemma better to understand herself, and has allowed her to recreate herself anew, with a fresh identity and aspirations. Several weeks after the “death,” Gemma realized that her drag persona was actually a dual personality—just like a two-faced Gemini. Since her rebirth, drag and performing has come much easier. “I found a name that I can have fun with. It’s a play on words, and it’s super descriptive of the two wildly different sides of me.”

Gemma Nigh’s performances are not something to skip out on. Steering away from the typical lip-sync performances, Gemma prefers singing live to her audience. Her look features a soft, old-Hollywood type of glamour, and she can normally be found sporting pinup-girl hair and a sharp-ass, winged liner. “Gemma Nigh is just a party girl through the decades,” she says through a laugh. “She’s that person that you’d want to hang out with whatever time period it is.” Gemma’s unique performances have earned her a consistent spot performing at the local club Try-Angles. For the last several months, she could be found onstage with Sister Molly Mormon, hosting showings of the latest season of Drag Race. “Having to get in drag every week and bring something new every time was so intense,” she says. Her ability to interact with local queer artists and community members have made the experience worth the work. “Drag has a place in the gay community that has stardom assigned to it,” she says, “whether you intend it to or not.”

Gemma Nigh has a bright future ahead of her. Despite not ultimately concerned with establishing stardom in a career of drag, Gemma hopes to continue bringing people together and highlighting those who deserve recognition for the support they bring to the LGBTQ community. “Drag is a form of expression,” she says. “Whether it’s messing with gender or cultural norms, you are welcome to join and express yourself however you want.” With rising mental health issues in our youth and among our peers, Gemma tells me that she believes in the importance of getting out from behind our screens and getting face time in with our own tribes. That’s where real happiness lies.

Be sure to check out Gemma Nigh on Aug. 19 at club Try-Angles for the Harvey Milk Boulevard Festival, where she will be performing alongside the queens of Those Bitches. You can also catch Gemma Nigh performing at club Try-Angles every last Wednesday of the month. Be sure to follow this beauty and keep tabs on future endeavors on social media on Instagram @twofacedgem and Facebook at www.facebook.com/TwoFacedGem.