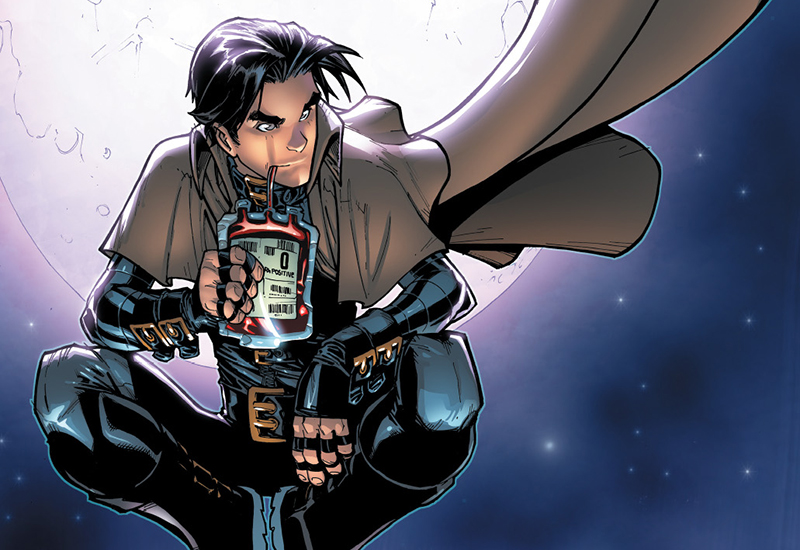 If Batman and Spider-Man had a baby and that baby was bitten by a vampire and torn from his parents so he couldn’t bitch about them forever, you’d have Alex Elders. Elders is the star of this late-’90s, fan-adored comic titled Crimson and it’s no surprise some of the people behind Spider-Man and Batman brought it to fruition. Elders is a reluctant vampire who won’t kill humans for blood and survives on donated plasma. He uses his powers to fight other vampires, but Elders never limits himself to vampires and will pretty much take on anything threatening in the unwholesome universe. His companions are: a Mexican/Indian Vampire named Joe, the crossbow-bearing Red Hood named Scarlet, Saint George (formerly Officer George) and a big age-old Grigori named Ekimus. Together this group of quasi-evil/religious do-gooders must protect mankind and find out why Alex Elders has been deemed the chosen one.

The major plot lines for this epic and magical adventure are not astounding or complicated. The late-’90s comic book world was still recovering from a decade of death and broken backs (Superman and Batman respectively) so storytelling in general became less heavy toward the end of the decade. In Crimson, the good guys are good guys and do nice things all the time in the spirit of their goodness. The bad guys eat snails, punch babies and stick to dastardly principles consistently. There is no grey in this world, just dark and light.

The artwork is very Spider-Man-ish which makes sense considering it was penned by Humerto Ramos who also penned The Amazing Spider-Man. The lead character Elders is depicted in various acrobatic forms traveling through the city and has huge, kind Peter Parker–like eyes to remind you that he’s still the good guy, despite the copious amounts of blood decorating each panel. The colors are bright and almost cartoon-like, which works as an excellent contrast to some of the comic’s darker themes. Head after severed head might flop around the pages, but you are more likely to chuckle than gag at their sloppy egress.

The script for Crimson is excellent. It’s fun, moody, wild and ultimately good-natured. I looked forward to reading it each chance I got and considering how much material I read, that’s an incredible compliment. The plot is fundamentally simple, but that’s OK because you don’t always know where it’s going. Brian Augustyn of Batman: Gotham by Gaslight fame does a great job of being entertaining while moving the story along. Many of the characters are self-aware to humorous effect, so don’t be surprised when you see Saint George being insecure shortly after killing a dragon. This story was created for us, but at times you can feel the artists behind it smiling ear to ear as well.

Crimson was a comic I actually collected back during its original release, so it was incredibly fun to go back and read something from my late teens. Vampires have taken a sad turn lately, but this comic carries the excitement they once had. It’s a violent comic but not a serious comic. It’s drenched in action but down to earth. It’s funny without being silly and it’s clever without sounding preachy. The graphic novel Crimson is like an amazing Friday night that can sit on your coffee table just waiting to be a blast. I can offer no higher recommendation. This is a terrific read.