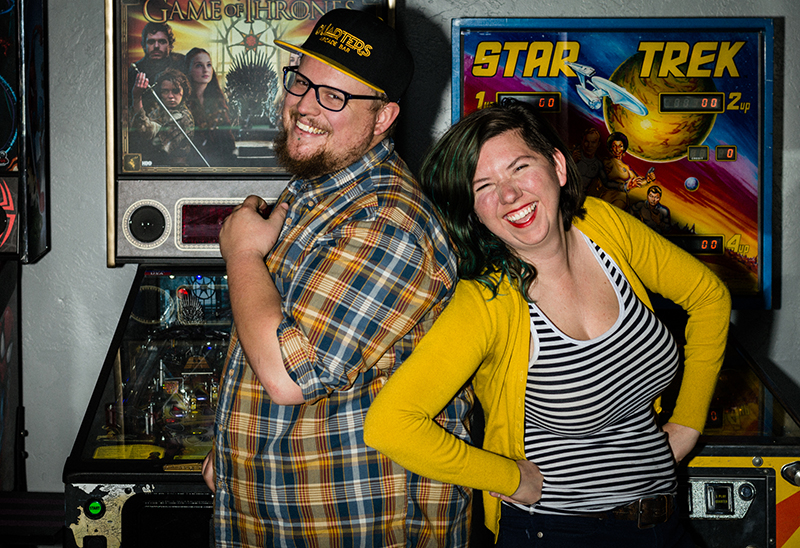 The first thing the bouncer at Quarters told me after asking for my ID was that they were all out of quarters. “We’re working on it,” he said. I walked inside and descended into an excited morass of people, the bar already at full capacity at 7 p.m. on a Thursday, its opening night. “Everything fell apart,” says Katie Willis. She and her partner, Michael Eccleston, have spent the last few years putting the arcade bar together. “There was a 10-minute window where our credit card processing went down, our ATM broke, and we ran out of quarters,” Eccleston says. “We sat in the office and looked at each other like, ‘Do we have to close the bar?’”

They posted about the problem on social media, and nearby bars lent a hand. “Everybody just showed up with bags of quarters from their bars,” Willis says. “It all fell apart and then all came together—it was a stressful 20 minutes,” she says, laughing. “Now we know,” Eccleston says. “We need a lot of quarters.”

It’s easy to see how they ran out that opening night. When I arrived I quickly found my friend, and we started identifying what games were on tap: Street Fighter II, Rampage, an original Xbox with Tony Hawk, a row of pinball and skeeball—all occupied. As we sidled slowly to the front of the drink line, I noticed it just behind us—Killer Queen.

I had resigned myself to the fact that I would never play Killer Queen again. I first saw this cabinet in New York three years ago at NYU Game Center, where it was kept as part of their enormous game library. It was an interesting evolution of the arcade cabinet: Killer Queen is a five-versus-five competitive game where each player moves and jumps on platforms scattered around the screen. Each team attempts to win by either killing the other team’s queen, bringing precious berries back to home base or via snail. (There’s a giant snail, and if you ride it from one end of the screen to another, you win. It rules.)

Opening night was interesting for me as someone who doesn’t have a strong connection to the heydey of the arcade scene. I came away knowing I’d be back, that Quarters was a bar worthy of a night out. For my friend, it was the moment we played Street Fighter II on a cabinet, a chance to publicly kick my ass. For some people, it was the light-gun hunting game, and for others, it was the foosball table. It’s good entertainment that’s nostalgic, fun to watch and, best of all, cheap. Eccleston and Willis both pitched it this way to potential investors: They wanted to create a space that brought out people’s desire to play and be social, and to offset the awkwardness of meeting people at a bar.

“We wanted to have offerings for people … who aren’t necessarily into video games,” Willis says. “Each person is nerdy in different ways. We all have this connection to gaming, but what’s your connection? I think of it as more of a gaming bar than an arcade bar.” Though it’s currently bent toward ’90s games, since opening, Quarters has already expanded its library, adding Super Mario Bros. and Pac-Man cabinets, a custom-made D&D table and a viewing screen to make Killer Queen matches easier to watch. Long term, the duo plan to install TVs for people to watch Twitch streamers and eSports. They even plan to get the kitchen up and running to serve food.

Why did it take so long for a place like to Quarters to come to SLC? A couple factors, Eccleston said. The liquor license process here is longer and finding and maintaining games could be a full-time job. “You need the right combination of people and desire to actually make it happen.”

Quarters is on the corner of 400 South and Main Street, in the basement well that was once the  Manhattan Club, a space that has rotated in purpose over the years. Once a cafe, a drugstore, a bakery, and a pool hall—the space has a legacy, and Quarters carries it on proudly. “We love old things and old places,” Willis says. But like Killer Queen, Quarters is an evolution of Salt Lake’s typical bar space, as well as being its own take on arcade bars in general. The cocktail of ’90s-era cabinets with tabletop spaces, mixed with modern trends like streaming and even the presence of a game such as Killer Queen, demonstrates the commitment to giving Salt Lake a different kind of social space.

Shaken but not deterred, Quarters’ initial growing pains seem healthy, indicative of the people who have worked to bring this experience to Salt Lake City. Whether you love skeeball or Street Fighter, cocktails or Pabst, Quarters wants to include you. Check it out 4 p.m. to 1 a.m. (except Tuesdays) at 5 East 400 South, in the stairwell just on the corner.