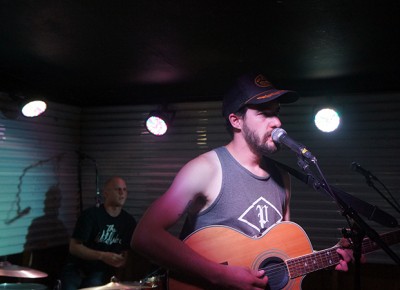 Shows that comprise only local acts tend to be some of my favorites. Call me biased if you will, but I’ve found that local shows tend to have a greater musical variety than a lot of touring acts, because touring bands want to fill seats, so they look for similar acts to round out the bill. Other than the fact that the members of Electric Cathedral served as the backing band for Charles Ellsworth, they bore no similarities to the musicality of the four bands at this particular event.

Up first was Vinyl Tapestries—a three-piece comprising keyboardist/vocalist Samantha Calmes, bassist Mat Hockett and drummer Lee Sopko. After the show, when they mentioned adding a guitarist, both myself and a few others protested the idea. What they have put together is so simplistically amazing that the addition of any other instrument would probably wreck what they have. Heavy on melody, song structure and emotion, theirs is a sound that combines elements of New Age and jazz. Calmes’ vocals have such a smooth, pitch-perfect delivery that it’s impossible not to be lulled into the world her lyrics create. This is not to say that their set was a melodic snooze-fest, though. Their numbers were mostly up-tempo affairs in which the drums and bass kept down the basic themes of each song—which allowed Calmes to show off her great dancing skills during instrumental parts—while the spacey, effects-laden keyboards would lift the listener to an astral plane of euphony. An amazing beginning to the show.

Another power-trio, The Wild War, followed and took the stage by command. With a sound based in grunge with nods to both the garage rock of the early ‘70’s and a flavor of blues, they were by far the most energetic band of the night. There were two specific factors of their performance that truly captured my awe. The first was bassist Phoenix Martinez—his lines were so clean, and he walked all over the fretboard with such ease (he never just played a root note the entire set) that when I found out that he’d only been playing for four months, it made me rethink the entire concept of a musician as a “natural.” The second factor was vocalist/guitarist Kevin Edwards’ tone. It was like the sound of a ‘60s Marshall stack with the grill being replaced by a cheesecloth covered in mud—oversaturated, but with enough distinctive characteristics to allow the notes themselves to be recognizable. This was somewhat surprising, considering both Edwards and Martinez spent most of their time actin out a visual interpretation of their band name by jumping and flailing like madmen around the stage, yet they never made any noticeable mistakes. After their set, the band and everyone in attendance needed to catch their breath.

Ellsworth hit the stage alone for the first song, and then was joined by Electric Cathedral as his backing band. Although known as a singer/songwriter whose music is in the realm of Americana-inspired folk, the addition of the band really fleshed out his sound and took some of his songs that had only been heard before with just Ellsworth and an acoustic guitar to a new level of greatness. What was so endearing about his music was not only in the chord structures and the way he would combine them, but the way his voice interacted with those melodies. With a very clean, distinct sound, there’s an honesty to his voice and lyrics that not only made you empathize with those involved in the subject matter, but also carried the listener to the same emotional place that is the core of each song’s setting. Throughout the show he mentioned a new album he’d just mastered and will be releasing this year. Whether or not he employed the same group of backing musicians, or none at all, I can’t see the release being a disappointment to anyone.

After his set, Ellsworth left the stage while Electric Cathedral immediately began theirs. To be honest, there aren’t enough adjectives in the English language to properly describe the level of talent this band has. My God, I was blown away. The rhythm section of Jake Gloschat (drums) and Kevin Schultz (bass) stayed pretty much in the realm of funk—and I mean REAL funk—the kind that you would have heard at a number of clubs in New York in the 1970s. Bass lines that walked like a man who had just won the lottery: with a spring—a joyous feeling, and a backbeat that was not only as solid as a rock, but had so many intricacies that, at times, it seemed to border on falling to pieces. As the music began and people in the audience started to shake their booties, in came vocalist/guitarist Ryan Arnold grabbing the steering wheel and making a hard-left turn by adding clean jazz guitar rhythms with distorted blues-based leads. It melded together so, so beautifully. The best example of this was during my favorite song of the set, “Witches,” which not only had all the previously mentioned elements, but also included a gorgeous guitar solo that sounded like warm butter sliding on a sheet of shimmering ice.

The only negative about the entire show was in the fact that it ended and I couldn’t go on tour with the headliners.