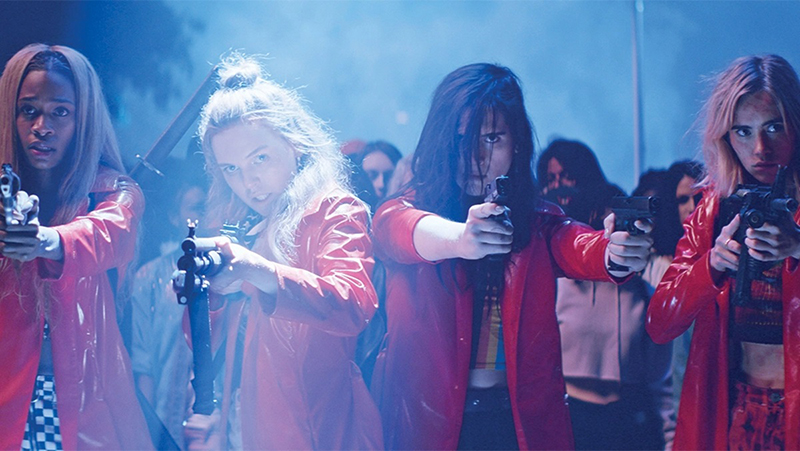 Watch a trailer for Assassination Nation and try to not feel the intensity. Violent, cascading images bathed in red, white and blue—all of which are extremely on the nose. This is A Lot, the movie. At first, I thought it seemed “This is America,” and I’d forgive you for agreeing because, yeah, the sentiment has now long been a 2018 refrain. I get it. We all get it. But Assassination is a such a structurally sound film that the bombastic ends up feeling thoughtful. This is about Salem, a town that devolves into a manhunt for four teenage girls who have allegedly leaked half the town’s private information. Salem’s lost its motherfucking mind.

The lengths to which the film goes to lay a believable foundation for this grounds it so well that I was taken off guard. Lily, Bex, Sarah and Em are high school seniors and best friends who love each other. One of the first scenes shows them hanging out at Em’s house, doing makeup, gossiping about boys and laying over each other affectionately. All of the warmth in this movie exists because of them, and all cruelty comes from the world around them, feeding on crumbling institutional power. The plot gains speed as the man with the most power in Salem is hacked: the mayor. After photos of him crossdressing surface, the town of Salem demonizes him as a bigot preaching morals he can’t abide. For all his effort to suppress LGBTQIAA rights, Mayor Bartlett’s femme fantasies are now public thanks to an anonymous hacker, and the town demands resignation. He quickly holds a press conference and commits suicide in front of the crowd, shooting himself in the head. The internet goes insane—gifs of shock and delight, reblogs that he had it coming. Reddit’s on fire: His death is lol.

Eventually, half the town gets hacked, and a supposed culprit frames the four girl friends—Lily, specifically— and Salem is all too ready to believe it, thankful for any lifeline that will bring normalcy back. Residents start wearing poorly made masks (and ski masks over those) that obscure their accountability and underscore the film’s looming sense that people aren’t as perceptible as we think—that for the most part, we know people as their curated selves, and that we can’t afford to know each other’s transgressions. The girls go through hell for this. Salem kidnaps and tortures each of them, forcing them to fight back.

Assassination Nation is honestly too much to unpack in this review. There’s a laundry list of reasons why things play out the way they do, and what makes the film so intense is that every reason plays off current, real-life tensions. Hell, the film starts with almost every trigger warning you can think of, and it’s a testament that none of them being present feels forced: abuse, classism, sexism, swearing, gore, drug use, homophobia, transphobia, attempted rape, racism, nationalism—it’s a list of symptoms. Salem is quick to make teenage girls the problem because it sidesteps confronting any of these as evidence of a chronically diseased society.

There’s no reason to think these girls hacked half the town, but if these four die, the status quo and the safety of anonymity, will surely resurrect this corpse of a town. Even as half of them begin a witch hunt for these girls, the chief of police chants, “We’re good people!” What started as a one-off trial of character has become a full-force abdication of responsibility for its own culture. It fuels a sense of nationalism that makes the story feel a little too possible, and I wouldn’t recommend it to anyone sensitive to the movie’s content warnings. Thankfully, there’s a surreal side to Assassination that enters and exits the film as necessary for its thesis, and these are a welcome reprieve, tender buttons in an overwhelming film.

Assassination Nation empowers young women while condemning the forces that have taught them how to act. If you can’t act like a young lady, we’re going to murder you, figuratively or literally, so take your pick. Play your role and suffer. Get good grades. Gag on these fingers. Be a good girl. Be a princess. Swallow. Never forget to say, “Thank you,” and remember: This is all your fault. –Parker Scott Mortensen