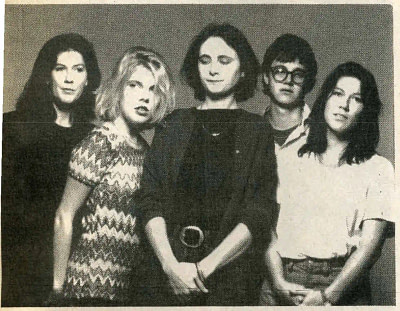 In 1989, Dayton Ohio twin sisters, Kim (The Pixies) Deal and Kelley Deal, mulled over the idea of a “real” female rock band. The “Bangles From Hell”…and thus THE BREEDERS were bred.

The Breeders current incarnation includes Kim and Kelley on vocals and guitar, Josephine Wiggs (Perfect Disaster) on bass and Jim Macpherson (Raging Mantras) on drums. As a prelude to the group’s Halloween appearance at Club DV8, the quartet graciously agreed to a telephone interview. The 30 minutes that followed involved Taco Bell, Sam Raimi‘s “Evil Dead” movies and the following excerpts!

SLUG: To start with…

Kelley: Salt Lake? Do they even have rock shows in Salt Lake? (Kim overheard in the background “Fuck No!”)

SLUG: Now, now. l guess in retort I should ask you if women can rock?

Kelley: Seriously, we wanted to show that females absolutely can rock. That there’s more to women rock stars than either metal or adorable pop.

Jim: l agree absolutely. I can’t see a difference between the way these ladies rock and the way my bandmates (in Raging Mantras) rocked. Well, actually the ladies might rock a bit harder.

SLUG: I know Josephine and Kim have other bands. Does that make The Breeders one of those dreaded side projects?

Kelley: Actually, we’ve been together for years and neither Kim’s or Josephine’s other bands have done anything together for a while. I guess that makes them the side projects.

Kim: I wanted to keep talking about rocking out. I’ve been perfecting my guitar moves, but there’s one thing I can’t do. And that’s wiggle around like I’m getting off. My best move is putting my foot up on the monitor

Kelley: As I was saying, we’re going to record another album soon. In fact, we’re performing a lot of new material.

SLUG: One of the things I’ve really liked about the band is its no-frills approach. Is that deliberate?

Kelley: I’d say so. I’ve been thinking a lot about the guitar work on, (Nirvana‘s) Nevermind, and I like it, but it bothers me.

Kelley: Well, like “Smells Like Teen Spirit” would take three more guitars if they do it live. We’ve opened up for them and the stuff I really like is the honest stuff.

Jim: I think that’s one of the things that makes the bands interesting. We all have different tastes in music. Like, I like King Crimson and Ministry. And our music reflects our inner anxieties.

Kelley: Inner anxieties? I can’t believe you said that.

Kim: We do have a lot in common though. We all have green eyes. We all think “Evil Dead II” is a great movie and we all like Taco Bell.

Josephine: Not me. I’m actually getting tired of it. But, I’m usually out-voted when we go out to eat.

SLUG: Josephine, you’re English. How did you get hooked up with these yankees?

Josephine: I met Kim in 1988, when my band opened for The Pixies. A year later I met her again in a bar in Germany and she had this project she was working on and the rest is history.

SLUG: Last question. Kelley, Kim, how can we tell who’s whom?

Kelley: I have better moves.