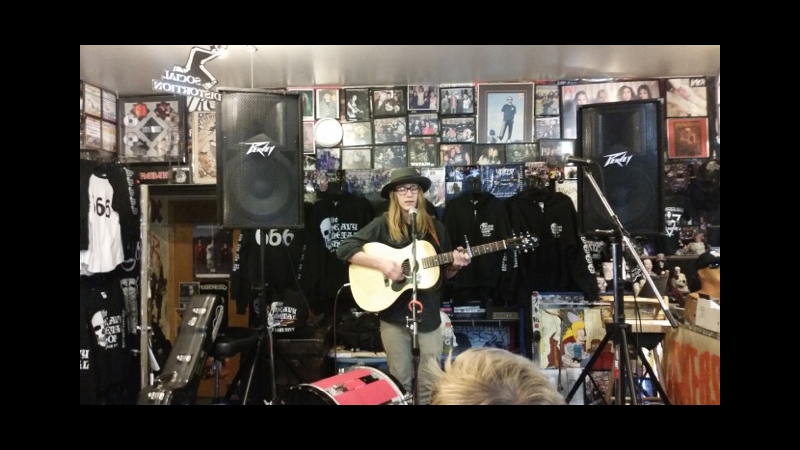 Sammy Brue may only be 14, but he’s already leagues ahead of folk singer/songwriters twice his age. Photo: R.G.B. Robb
The Heavy Metal Shop has been around for over 25 years now. In that time, the owner, Kevin Kirk, has seen many musical trends come and go. Through these trends, he has seen many great (and terrible) musical acts and, because of this exposure to so much music, he’s been able to sniff out the mediocre pretty well. So, although one might look at the lineup for this show with a bit of confusion (all of the music by each artist is related to a folk-based singer-songwriter of some kind) music has never been about specific labels for Kirk, and this night was definitely full of that.
Up first was singer/guitarist Pete Sands, a.k.a. Blackkiss. He claims to be from “parts unknown,” and says his music is “from the desert.” After listening to his set, I could easily see how that desolate terrain could give birth to the overall feel of his art, especially during the song “Helldorado.” It had a very eerie feel to it, like a folk version of “Riders On The Storm” by The Doors. Both that song and another called “Black Tears” were definite highlights.
Sands’ music always had an underlying country feel to it, but it was akin to old country … good country. In fact, the one thing I found most interesting about it all was that his voice sounded almost identical to Rusty Buchanan, so it fit the mood perfectly. Really, and considering the fact my father fought in Korea so it breaks my heart to say this, the only song that was a let-down was one he had written about returning troops with PTSD. The lyrics were genuine, however it sounded just like a thousand different country songs that came out shortly after 9/11. Overall though, Blackkiss delivered a pretty good set.
I had seen and heard many things about the next artist, Ogden native Sammy Brue, so I was interested in having the opportunity to check him out live. His is a show I am sure I will be seeing again in the future.
Musically, he sounded like a cross between Bob Dylan and Paul Simon. Vocally, he had a Simon sound mixed with a bit of Joe Walsh. OK, now that you’ve got that in your mind—imagine upbeat tunes with such intricate finger-picking and melodic structure that it borders on perfection. His music is the kind that you simply cannot keep yourself from moving SOME body part to. His voice is as pure as the driven snow, and never challenges the listener to enjoy—in fact, the symbiotic relationship between his songwriting and abilities as a musician seem to flow together seamlessly. I could go on for pages about the songs themselves. Songs like “I Don’t Want To Die,” where he plays a MEAN harmonica, and “Was I The Only One,” which carries with it a definite ’50s chord progression and, according to Brue, was “written last night” (If he writes THIS GOOD in one night, then I need to put down the guitar forever), were my favorite of his set, but honestly he didn’t play a bad song at all.
Oh … I forgot to mention, he’s only 14! I spoke with him before the show, where he informed me he’s only been playing for four years. I can honestly say that this kid has discovered more in those four years (not just the music either, his lyrics are intelligent and full of emotional depth) than many songwriters I know who have been playing for over 20. Please do yourself a favor and go listen to him. Online … live … it doesn’t matter. You will trip over your jaw as you walk out of the building like I did.
Rounding out the event was John Moreland from Tulsa, Oklahoma, and he couldn’t have ended the show better. Most of his music was melancholic. It was an interesting counterpoint to the upbeat tunes we had just experienced with Brue. His sound had the same style and sensibilities of Arlo Guthrie (without the piano), but a lot of the chord structures and progressions were in the vein of the sadder Bob Seger numbers.
Much like the aforementioned Seger, Moreland’s lyrics centered around a certain kind of nostalgia. Like when you’re in high school and you have your first crush, but it doesn’t work out the way you want it to. In fact, a majority of the songs were about love and the loss of it. The tonal quality of his voice carried with it such a level of earnestness that you truly felt the pain along side those in the songs that he would sing about.
The only critique I had about his performance was that, near the end, with the content of both the music and words, the songs started to sound a lot alike. With that said, the set never got monotonous, but I think putting in a few more upbeat pieces would definitely serve him (and the audience) well.
Although I’m sure that The Heavy Metal Shop isn’t going to change it’s entire brand and go singer/songwriter, it’s nice to see some really great music being brought in to be played live there … even if it’s not played at 240 beats per minute.
Photos: