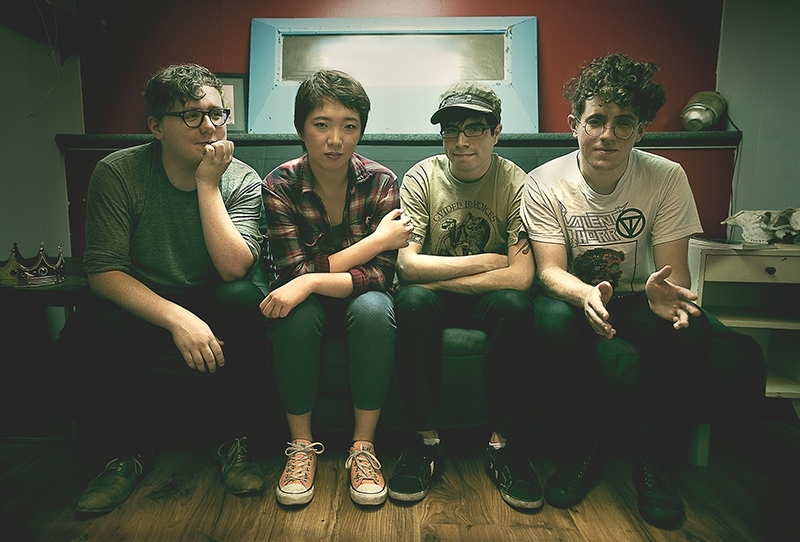 Chalk opened for Into It. Over It. and Lemuria. Photo: Garrett Allen

I’m smoking by the fire and staring, just trying to figure out if that guy with the beard and the glasses behind the merch table is part of one of the bands, but it’s hard to distinguish someone if you’ve never seen them on stage before. My social anxiety keeps me quiet and drawn to the flame for comfort, though I casually eavesdrop to see if I can sneak my way into conversation. It’s 20 minutes past seven, a band’s set up, but no one’s playing yet, which is par for the course at Kilby Court. Usually, this would be the time to hit up the bar at a show, but Kilby is an alcohol-free zone, so I resign myself to another cigarette and more people-watching. My friends encourage me to spark up a conversation, but I’m busy looking at bright cell phone screens illuminating the thick-rimmed glasses of those sitting alone on the edges of the patio, envying the socially adept, and preemptively deciding which Lemuria shirt to buy. The first band begins to sound check and the 20 or so people move from their chilly tableaus to the take refuge in the music inside.

First up was Chalk, a local four-piece garage band with obvious influence from ’90s alt-punk bands. I could definitely hear some Superchunk and Dinosaur Jr. thrown in there. Though they’ve been on the scene since 2012 and frequently play the local rounds, this was somehow my first time seeing Chalk. I recommend seeking them out if you’re nostalgic for some raspy tunes with fast and catchy guitar riffs. A friend of the band stepped in as a replacement for their regular bass player and sounded great, so I’d like to see how they play with the core members present. Basically, they’re all very technically skilled and it’s clear that they’re having a good time with adjustments and all. Jeremy Devine on drums pulled my attention most when he sang “VHSOD” and a few others, because those sounded more raw than the rest of the set. However, the highlight songs for me were “Pity Party” and “500 Days of Bummer,” because the lyrics are relatable and made me feel like I was 18 again, stepping into Kilby for the first time. Overall, Chalk live is surprisingly different than the available songs up on their bandcamp, but both are excellent for the nostalgia effect.

Another short break and it’s Evan Weiss of Into It. Over It. asking for a little more white light. He’s bright in plaid with a gorgeous acoustic guitar with new strings in need of tuning. We learn about how the tour with Lemuria came together after years of discussion and an announcement of what will surely be the most excellent band ever, RIPS. I assumed there would be more touring members backing him up, but as a solo performer, Weiss rips your heart out with the articulation of his various painful experiences—you can’t help but be completely focused on everything he’s doing and saying. All of his words are delivered with perfect diction, so even my friends who’d never heard him sing could really understand him. He talks between tuning, commenting that we’re a quiet crowd, but quickly corrects “quiet” with “respectful,” which was exactly how it felt. We all waited patiently to hear what story would come next. Each song has deep background and his discography is quite an adventure with stories ranging from dating a woman in an open marriage to realizing the lack of change with age.

As part of the emo-revival scene, Into It. Over It. reminds me of Dashboard Confessional in the best of ways—with less mass-produced lyrics and if Chris Carrabba could really harness the potential of his voice. The opening act was fun and felt younger, but this act was much more reflective and everyone stood in reverence to the performance of electric-acoustic emotions. Kilby Court is the most intimate venue in the valley, everyone’s stuffed into this little room with the performers on the barely lifted stage in the corner, so it’s impossible to ignore what’s happening around you. Weiss begins playing songs I haven’t heard before, but I feel as if I instantly know them. I’m pretty sure that “22 Syllables” might be the most popular song, because I could hear very muted singing along around me and I wish I could’ve joined in. If you used to, or still do, like Motion City Soundtrack, there’s definitely portions reminiscent of their earlier millennial stage present in Into It. Over It. It’s a sound made in Chicago that makes me want to listen to while driving along the coast of Redondo after meeting an old friend and/or ex to catch up. It evoked very specific scenarios for me that might not be true for everybody, but there’s certainly a highly developed lyrical storytelling in this music. He asked, during one pause, if any bands had saved our lives. No one in the crowd said anything, not because we weren’t paying attention, but no one wanted to speak over anyone else. Weiss confessed it was listening to Pearl Jam in the early days that eventually led to Sunny Day Real Estate, one of his major influences. The most striking part of his set was absolutely “The Shaking of The Leaves,” one of the most chillingly soft songs about losing a friend that literally brought tears to my eyes because it’s such a sweet melody complimented by such an earnest powerhouse voice.

Another dose of nicotine and then it’s time for the headliner, Lemuria. This three piece pop-indie-punk band from Buffalo is always a treat when they pass through Salt Lake, and each time they seem more comfortable, and more people show up. The room’s now full of people, and singer and guitarist Sheena Ozzella expresses the literal warmth of the stage and the warmth of Kilby as a venue. This is the best way to see Lemuria, in a small space, because absolutely everything is more intense. Max Gregor jumps around stage with his bass like a maniac and all of our heads bob to keep up. They play fast and Ozella’s voice is like a punk-rock nymph’s. This tour focuses on their newest album, The Distance is So Big, so the majority of the set was new and included some songs only available on the 7” vinyl they sold at the show. Some old favorites brought everything together, our meek audience voices grew louder during “Dogs” and “Pants” and the show finally felt close.

At the end, Weiss joined Lemuria at Kilby Court for their Salt Lake debut of RIPS, their high-energy music combines all the best elements from both bands. Sweet sounds and a supergroup to watch out for next year. The night ended on a perfect note, a slightly punkish cover of Modern English’s “I Melt With You” brought everyone to happy spirits.

I went back to the merch table and confirmed it was Weiss behind the counter, bought a couple shirts and Lemuria’s fantastic three-track 7” with their comic collaboration with Mitch Clem (Nothing Nice To Say) in which they talk about their tour in Germany including Nazis and pizza. If you get the chance to catch the rest of the Lemuria and Into It. Over It. tour, be prepared for a strange and beautiful night.